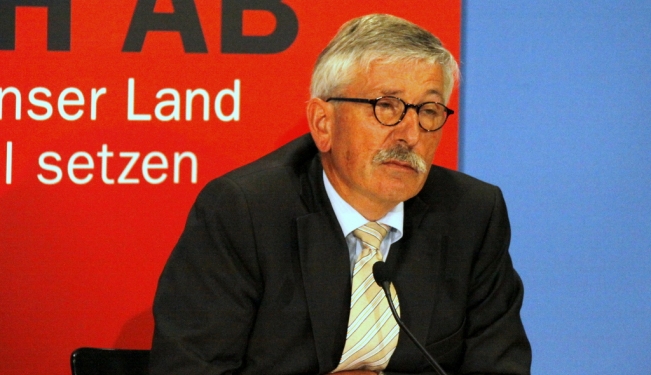 When Thilo Sarrazin published his book Deutschland schafft sich ab (“Germany abolishes itself”) in 2010, he reanimated the immigration debate he had begun one year earlier. The former social-democratic Senator of Finances of Berlin slurred Turkish and Arab immigrants in the book, saying they “produced only headscarf girls”. He also said that Muslim immigrants caused trouble and lived in “parallel societies,” which recalls the Western European debate on Muslims’ ability to integrate. His thesis not only drew cheers from the extreme right, including the National Democratic Party, but won support from large parts of the social-democratic electorate.

After more than ten years of gradual acceptance of Germany’s immigrant population, public debate seemed to fall precipitously into the rhetoric of the 1980s, when the notion of a Türkenproblem (“Turks problem”) was commonplace. Immigrants and their descendants well integrated into German society felt pushed back into their role as Ausländer (“foreigners”), one they had just stripped off in a long and hard struggle for acceptance.

It was only in 2005 that the Bundesrat (Chamber of the German Federal States) approved the Zuwanderungsgesetz (“in-migration law”), a neologism carefully crafted to avoid the term Einwanderung (“immigration”), which implies a definite stay rather than the possibility of trans- or return migration. Previously, most politicians publicly denied the reality of immigration to Germany for more than thirty years. Many Germans believed Germany could and should not be an immigration country, and that foreigners living and working there were to return to their native countries some day.

Although Germany has experienced significant labor immigration of ethnic Poles or Italians since the late 19th century, complemented by extensive forced migration during and after both World Wars, many Germans believe immigration started with the “guestworker recruitment” program begun in 1955. As most Western European industrial states during the postwar economic boom, the Federal Republic of Germany suffered a serious labor shortage, further tightened by the construction of the Berlin Wall in 1961. Migrants from Italy, Spain, Greece and Turkey — countries with a considerable excess of labor — travelled to Germany and signed their work contracts right at the factory gates. To control this “wild” migration, the German government signed recruitment contracts with the countries of origin, mainly situated around the Mediterranean and including Portugal, Morocco, Tunisia and even the socialist Yugoslavia.

It was the shared belief of all parties involved — Germany, the countries of origin and the migrants themselves — that their stay was only temporary. They would work for two or three years in order to return and invest their hard-earned money in a house or business. But although the image of the German guestworker system gained international approval as a good policy of rotation migration, it never corresponded fully to reality. There was no rule requiring immigrant workers to return home after a certain time — a corresponding clause in the German-Turkish agreement was soon dropped — and, not surprisingly, the average duration of residence grew with the rise of labor immigration.

The discrepancy between the proclaimed rotation of guestworkers and the reality of de facto immigration led to social problems in housing and schooling as the public authorities refused to invest in infrastructure to benefit people who were expected to return soon. As in all Western European countries, this perceived “migrant problem” was discussed publicly in the early 1970s and led to a “recruitment stop” in November 1973. To justify this measure against the German economy and the immigrants’ countries of origin, German Minister of Labour Walter Arendt linked the decision directly to the oil crises, which had begun only recently. With the stop, immigration to West Germany had, in the eyes of most Germans, become history.

Yet the stop only banned labor migration from the former recruitment countries. Workers from the European Community and other Western countries such as Switzerland, Canada and Israel could still live and work in Germany as well as family members of foreign residents or refugees. Immigration thus continued slowly but steadily in the 1970s and 1980s. The already strong Turkish community grew due to family migration and political refugees that fled persecution after the 1980 coup in Turkey. When it became Germany’s largest – and most visible – immigrant group, the public debate switched from ‘Ausländerproblem’ to ‘Türkenproblem’.

While the social-democratic migrant policy in the 1970s was ambiguous, ranging from the recruitment stop to the proposal of a real integration policy including political and naturalization rights for immigrants, the economic recession following the second oil crisis in 1979 put an end to the integration discourse almost immediately.

Thus began a race for proposals for a more restrictive migration policy, based on the belief that Germany was a “non-immigration country” (Nichteinwanderungsland). ‘Guestworkers’ were rewarded for voluntarily returning to their home countries with their families, while migrants entering Germany via family unification received restricted their work permits. The right of asylum,historically a basic right in post-Nazi Germany, shrank and was finally suspended by a clause denying refugees asylum if they entered German territory from a so-called “safe third country” neighboring Germany.

This “asylum compromise” between the conservative government of Helmut Kohl and the social-democratic opposition restricted not only refugee migration but also ethnic migration of so-called Volksdeutsche, Eastern European migrants of German descent, which had increased drastically after the fall of the Iron Curtain. A heated debate ensued regarding the wave of violent racism that struck reunified Germany in the early 1990s. Street raids on African contract workers and arson attacks on the homes of Asian refugees as well as on Turkish families living in Germany for more than 20 years alarmed Germans and the international public. This was the peak of public xenophobia and a turning point for German society in acknowledging its intolerance towards immigrants.

The electoral victory of the Red-Green Coalition in 1998 reflected this change in the public attitudes on the political level. One of the coalition’s first projects was the reform of the German Nationality Law, which had based upon an imperial law from 1913. After a hard struggle on the domestic level — the conservatives won a decisive election in the Federal State ofHessen with a campaign against the new citizenship law — it was again a compromise between the major political actors that made the limited reform possible. From then on, children born in Germany obtained German nationality in addition to the nationality of their parents. Achieving their legal age they had to opt for either the German or the foreign citizenship, as dual citizenship was generally not accepted for adults.

The struggle for a new immigration law was harder still, but after five years, the Zuwanderungsgesetz — which was rather an immigration prevention law entitled “law for managing and containing immigration” — was approved by both the Bundestag and the Bundesrat. After more than 30 “lost years,” in which according to migration expert Klaus Bade a proper integration policy could have been established if Germany had acknowledged its immigration reality in time, it finally seemed to cope with the reality of its immigrant situation. “Integration” became a new buzzword and Christian Democratic Chancellor Angela Merkel even labeled the Federal Republic as Integrationsland Deutschland (“Germany, country of integration”).

Unlike what one might expect, the term Integrationsland did not correspond to the claim for recognition of the immigration reality and the integration of those whose parents or grandparents migrated to Germany. Instead, it was invented in opposition to Einwanderungsland (“country of immigration”), used by the left and based on the idea that integration is an immigrant’s duty in exchange for living in the country legally. For example, spouses from countries perceived as “non-Western” by German authorities are obliged to pass language courses before obtaining a visa to live with their spouses in Germany. Furthermore, attending so-called “integration classes” is mandatory for immigrants wishing to obtain permanent residence permits. Integrationsland Germany still has the old reflexes against its migration reality. Ironically, there seems to be a new exodus of well-educated young people “returning” to the countries of origin of their parents or grandparents for better employment prospects. One could say that “German integration” is in fact turning immigration into emigration.

The debate initiated by Sarrazin, as well as rebranding efforts such as Integrationsland or Menschen mit Migrationshintergrund (“people with migrant background,” the official equivalent for the more commonly used Ausländer) show that despite the partial recognition of the reality of immigration, many people in Germany still harbor doubts that people of Turkish or Russian descent can be proper Germans.

Adding to the problem, there are politicians and authors trying to benefit from racist attitudes still widespread in the German public. This phenomenon is not uniquely German, but observable in many European countries. Nonetheless, in a “Country of Integration,” debates about immigrant problems should address the need for the abolition of discrimination in education and employment, not fuel self-fulfilling prophecies of ethnic segregation.