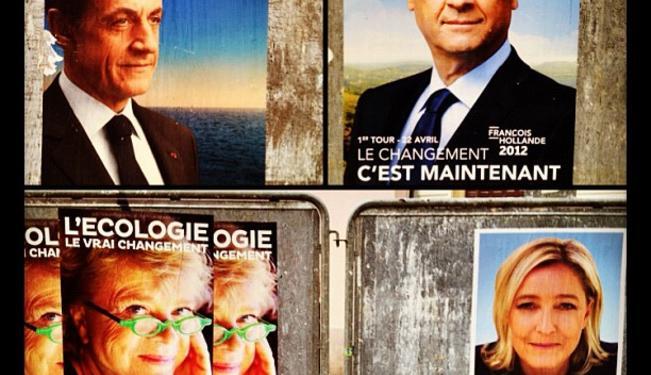 The French have a two round election, with only the top two in the first round, contesting the second round three weeks later. At the moment, it is likely the two in the second round will be François Hollande, the Socialist (now on 27.5%) and Nicolas Sarkozy (now on 29.5%).

The third and fourth candidates, Jean-Luc Mélenchon of the Left Front, and Marine le Pen of the National Front are both on 14%, so neither of them is likely to overtake the front runners. Francois Bayrou, the Centrist candidate, is on only 10%.

When voters are asked who they would vote for in a straight fight between Hollande and Sarkozy, they plump for Hollande by a margin of 8 points. This is because Hollande picks up a bigger share of the eliminated candidates’ votes. For example, Hollande has a margin of 81/3 among Mélenchon’s voters, and 40/32 among Bayrou’s. Sarkozy beats Hollande by 49 to 16 among Le Pen’s electorate.

Sarkozy’s best chance to win is if he can convert Bayrou’s voters to his cause, possibly by offering the Prime Ministership to Bayrou, while still holding on to the National Front electorate. This would not be an easy task, because there is little or nothing in common between Bayrou’s electorate and that of the National Front.

Some of the campaign debate is about taxing the rich. This is in response to the fact that incomes at the top in France have risen faster than incomes in the middle and lower range. Clamping down on Islamic militants, and employing more teachers, are other recurring themes.

The fact that France has an excessive budget deficit, has lost competitiveness vis à vis Germany, and as a result has a big trade deficit, is not getting attention from the big parties.
France's loss of competitiveness

Hourly labour costs in France are now 10% higher than in Germany, whereas in 2000, they were 8% lower.

The state in France spends 56% of GDP. Deductions from wages to pay for health and pensions (the retirement age is only 62) are extremely high and deter job creation. Yet French politicians blame things like the Irish 121/2% tax rate for their problems in attracting investment, rather than the cost of employing people in France itself.

If Hollande wins, he could find himself dependent on Deputies from the party of the Left Front, who favour a complete ban on redundancies, and a 100% tax rate on incomes above 350,000€. Hollande himself already favours a top 75% tax rate, and an increase in the wealth tax.

France has a revolutionary tradition and a passionate belief that political action can change things. The difficulty is that globalisation, European integration, and accumulating government debts, have reduced political options more than French politicians are willing to admit.

Free Movement of Capital Ignored in the Debate

The policies of the French Left would be very difficult to implement, because as long as France continues to allow free movement of capital, people who feel they are being overtaxed can simply leave the country, and take their money, and their factories with them.

Free movement of people, and of capital, are requirements of EU and euro membership, and have allowed France to develop world class companies, like Pernod Ricard, which owns Irish Distillers.

France is prepared to take the benefits from globalisation, but has not accepted that these benefits come with limitations on what is politically feasible.

I believe that the unreality of the debate in France about its public finances, and about its true economic options, could become a threat to the future of the euro.