Catalonia’s right to an independence referendum has been denied for years.

These are historical times for Catalonia and we, the people, feel the ownership of it all as we feel the support of our government. It has all been worth the time and the effort of so many, for so long.

Make no mistake. Independence from the Spanish kingdom was never thought to be easy or immediate. We knew it well, and we understand it even better now, with the Spanish government’s attacks on our elected executive and institutions. The former president of Catalonia, Artur Mas, has been barred from office for two years for having organized a non-binding consultation on independence in November 2014; Carme Forcadell, the Catalan Parliament speaker, is on trial for a criminal offense of having allowed a parliamentary debate on independence. We had long been partners with a Spanish state that has increasingly revealed itself as a powerful unfeeling overlord.

Spain has long been exhibiting a worrying lack of separation of powers and democratic values. The Spanish government, via the Constitutional Court, has fined the organizers of popular mobilization groups and other Catalan officials and ordered the closure of websites related to the referendum. The court has also censored any reference to the referendum — scheduled for October 1 — in Catalan press and media and intercepted private postal correspondence with references to the vote. This is something difficult to imagine at the heart of the quietly-condoning European Union — which seems to be yet again obviating its own foundational principles. And yet, even as part of this “union” that we timidly rely on, we are more than ever in need of international support that condemns the repression and the lack of respect to the fundamental rights of the Catalan people and government.

We also expect the international community to legitimize Catalonia’s right to an independence referendum that has been denied for years on end. Catalans are very much aware of their influent adversary. Considered another long-established monarchy and young successful “democracy,” Spain has a place in international mainstream politics and treaties, which was never going to mean a smooth path for Catalan aspirations.

Despite it all, we must be serene and never forget how it all began. The unprecedented, and now well-known, Catalan grassroots movement began seven years ago, when the Spanish Constitutional Court disposed of key articles of the Catalan Statute of Autonomy. Because the reformed statute was not only passed by both the Spanish and Catalan chambers, but also ratified by Catalans in a referendum in 2006, its 2010 replacement has always been perceived with an understandable lack of respect in Catalonia. From this stems the mistrust toward the legitimacy of both the Constitutional Court and its altered statute, which is at the core of secession aspirations of many and represents a genuine legal grievance that must not be underestimated.

Seen from inside, and even more in view of the recent assaults on freedom, there is no way back. Key to this organized civil society movement is that it has had the backing of the Catalan government, with the pro-independence parliamentary majority won in 2015 elections. From 2010, a large proportion of the Catalan people, together with their elected leaders, have been preparing for this institutional challenge and building awareness of it through peaceful demonstrations. These have been years of patient but active waiting that have resulted in detailed analysis of a sound strategy for secession and in people united as actors of change — a majority acting with studied synchronicity and undeterred will against a powerful, demophobic and, therefore, undignified Spanish state.

A popular majority united against the totalitarian regime that is incredibly exhibiting its force as we speak. Let us remain alert. These next days will be decisive. 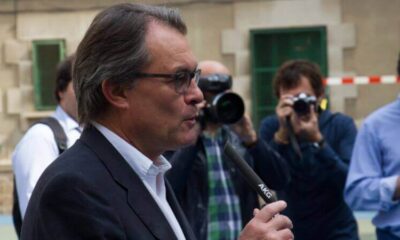