According to The Guardian, British Prime Minister Theresa May has formally invited US President Donald Trump for a state visit, though — sadly, given the importance of the event — “without a full-blown state banquet.” Prominent politicians from the opposing Labour Party have had the gumption to criticize Trump’s policies and even dared to suggest he may be unwelcome in the United Kingdom.

This was too much for May’s foreign secretary, Boris Johnson, who saw danger lurking. He upbraided his rivals, Labour leader Jeremy Corbyn and London Mayor Sadiq Khan, with these words: “The US is the biggest single investor in the UK — yet Khan & Corbyn seem determined to put this crucial relationship at risk. We will not allow US-UK relations to be endangered by some puffed up pompous popinjay in City Hall.”

Adversely modified as a result of telling the truth, especially if there is money involved

The Daily Devil’s Dictionary sees no need to define, even for a modern audience, the word “popinjay,” an archaic word for parrot, now applied mainly to pretentious people who are inclined to employ Shakespearean verbiage to insult their enemies.

Johnson felt compelled to castigate Corbyn and Khan after learning that Trump had cancelled a planned visit to London to open the new US embassy. Trump gave as the spurious reason for his cancellation his indignation at learning that his predecessor, Barack Obama, had decided to sell the former embassy in Grosvenor Square at an unfavorable price. In fact, the sale was initiated by George W. Bush, but it is more consistent with Trump’s logic to blame Obama, every element of whose legacy he is on a mission to overturn.

Nevertheless, Johnson was perceptive enough to see through the hypocrisy of Trump’s excuse and offer as the real reason the attitude of his own political opponents. It was only fitting. Just as Trump could blame Obama for Bush’s initiative, Johnson could blame the Labour politicians for Trump’s cancellation and deny the real reason, according to Business Insider: Trump’s fear of mass protests against his presence in Britain. This is the very reason Mayor Khan put forward. In Khan’s words, “His visit next month would without doubt have been met by mass peaceful protests.”

Thought there was no direct link, it is worth noticing that this controversy emerged on the same day that President Trump’s derogatory and racist characterization of Haiti and African countries broke in the news.

Since the 17th century, England’s political culture has always had a bipolar tendency, shifting between Cavalier (royalists, supporters of King Charles I) and Roundhead (the Puritan revolutionaries, followers of Oliver Cromwell, who beheaded the king). Theresa May is a typical stern and dour Roundhead, all business and no style, whereas Boris Johnson appears to fancy himself a Cavalier poet. Thus he is constantly tempted to produce a courtier’s rhetoric, which runs the risk of obscuring even a message designed to serve May’s Puritan cause. In this case, the cause is none other than to strengthen the ties with the former Puritan colonies, now a powerful nation on the other side of the Atlantic, as she loosens Britain’s ties with Europe.

As The Guardian comments, while the Boris the Cavalier’s “tweet initially seemed to take No 10 by surprise, Johnson’s comments were later endorsed.” Acknowledging the contrast in style, Downing Street explained, “Boris expresses himself in his own inimitable way — but we agree that any risk to the crucial US-UK relationship is not in our country’s best interests.” 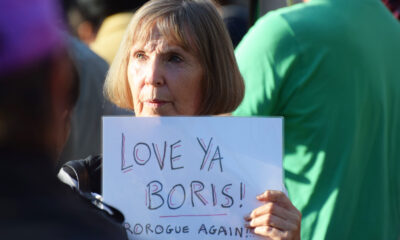