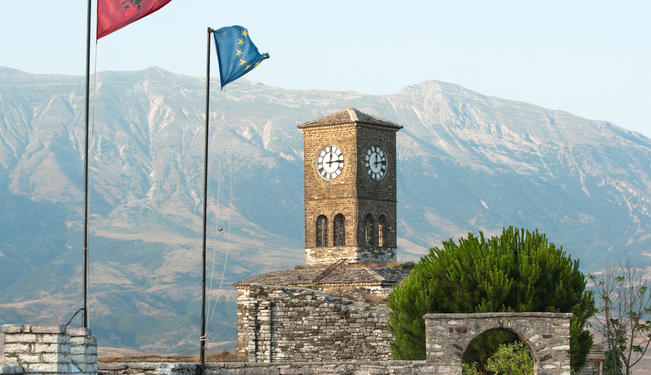 Pan-Albanian movements will remain as an important political factor for Europe.

“As a united nation, let us continue our effort toward the place that Albanians in Albania and in Kosovo deserve within a united Europe.” These are the words of the head of Albania’s Socialists — the man who is likely going to be the new prime minister of the country — Edi Rama, in his first speech after his election victory became publicly known. His party alliance won 84 out of 140 seats in parliament on June 23. The right-wing conservatives under former Prime Minister Sali Berisha received only 54 mandates. Berisha stepped back as the head of the Democratic Party, but announced that he would keep his mandate in the parliament.

Before the parliamentary elections, Berisha was the leader of a nationalist movement. According to the Albanian Institute for International Studies (AIIS), the “unprecedented increase” of nationalism started in the last months of 2012 on the occasion of many festivities celebrating Albania’s 100 years of independence. In early February, Berisha spoke out against “the unjustified separation of the [Albanian] nation amongst five states in front of a distinguished audience at the Munich Security Conference” and against “Albanophobia” in the region. At the celebrations marking 100 years of the establishment of Albania in Pristina (Kosovo), Skopje (Macedonia), and Albania itself, the former premier called for every single member of the “nation” to contribute “every minute, every hour and every day” to the realization of national unification for Albanians. He always emphasized that this unification would take place “in the bosom of Europe”. This phrasing was seen as deliberately ambiguous by his critics, because it did not reveal if Berisha was aiming at changing existing borders.

In Albania’s media, there was an intense discussion about the future prospects for an Albania defined by its “natural” (read: ethnic) borders. That would mean a unification of Albania with Kosovo (almost 90 percent Albanians), western Macedonia (25 percent Albanians), and possibly territories in southern Serbia and Montenegro that are mainly inhabited by Albanians. According to discussions in the media, there are many of benefits of unifying Albanian territories in the region from economic and social perspectives. A bigger domestic market could be created, which would lead to a more efficient division of labour and an increase in trade, investment, and employment. Politically, the “extended” Albanian state would be more willing to accept political requirements coming from the European Union (EU) and to speed up the construction of stable state institutions. As a NATO member, the “natural” Albania would then be subject to the organization’s discipline, which would strengthen regional security.

Alarmed by this “nationalistic delirium,” as it was called by a sceptic in Tirana, Albania’s closest foreign political ally — the US — but also the European Commission and key EU states such as Germany, rushed to spread some sobriety. The overall tone was that the borders of Europe are not to be changed. Although Berisha refrained from using extreme rhetoric after these remarks, the horse of nationalism had already bolted.

In a representative survey conducted in the spring of 2012, AIIS came to the conclusion that 55 percent of respondents in Albania would vote “yes” in a referendum on unification with Kosovo — 14 percent would vote “no” and 16 percent would abstain from voting. Surveys conducted over the last couple of years by Gallup Europe found that there is a lot of support amongst Albanians in the region for unifying the nation as one state. This is especially true in Kosovo (over 70 percent).

The change in government in Tirana has now shown that economic and social questions are their main concern for the majority of the population at the moment. According to Transparency International, nowhere in Europe is the awareness of corruption as high as in Albania. Economic growth has only reached 1.5 percent in 2012, which is the lowest figure since 1997 — the year when the country’s economy collapsed. Southeastern Europe is suffering from the consequences of the global financial crisis, and particularly Albania has been affected by the decline in remittances from its citizens who reside in Greece and Italy.

To prevent a change of power resulting from economic misery, the dramatic social upheaval, and increasing political polarity, Berisha placed his bet on nationalist tactics for parliamentary elections. However, the socialist opposition could not afford to reject unification ambitions for tactical reasons either. Apart from election tactics, it does not see any reason to totally abandon the popular goal of completing national unity.

Because of the historical backwardness of this part of southeastern Europe, but also because of growing accession scepticism in the EU, Albania, Kosovo, and Macedonia have little hope of entering the EU anytime soon. Additionally, the EU and its key states have a lot less influence on Albanian politics than the US. The most recent AIIS survey shows that 80 percent of people living in Albania consider the US as influential, whereas only seven percent believed the same thing to be true for the EU.

Nevertheless, the EU should initiate accession negotiations with all countries in the region willing to join the union. Without a realistic prospect of EU membership soon to come, Albanian nationalism could gain the upper hand. The result would be chaos in southeastern Europe.

*[This article was originally published by SWP and was translated from German by Annika Schall.]