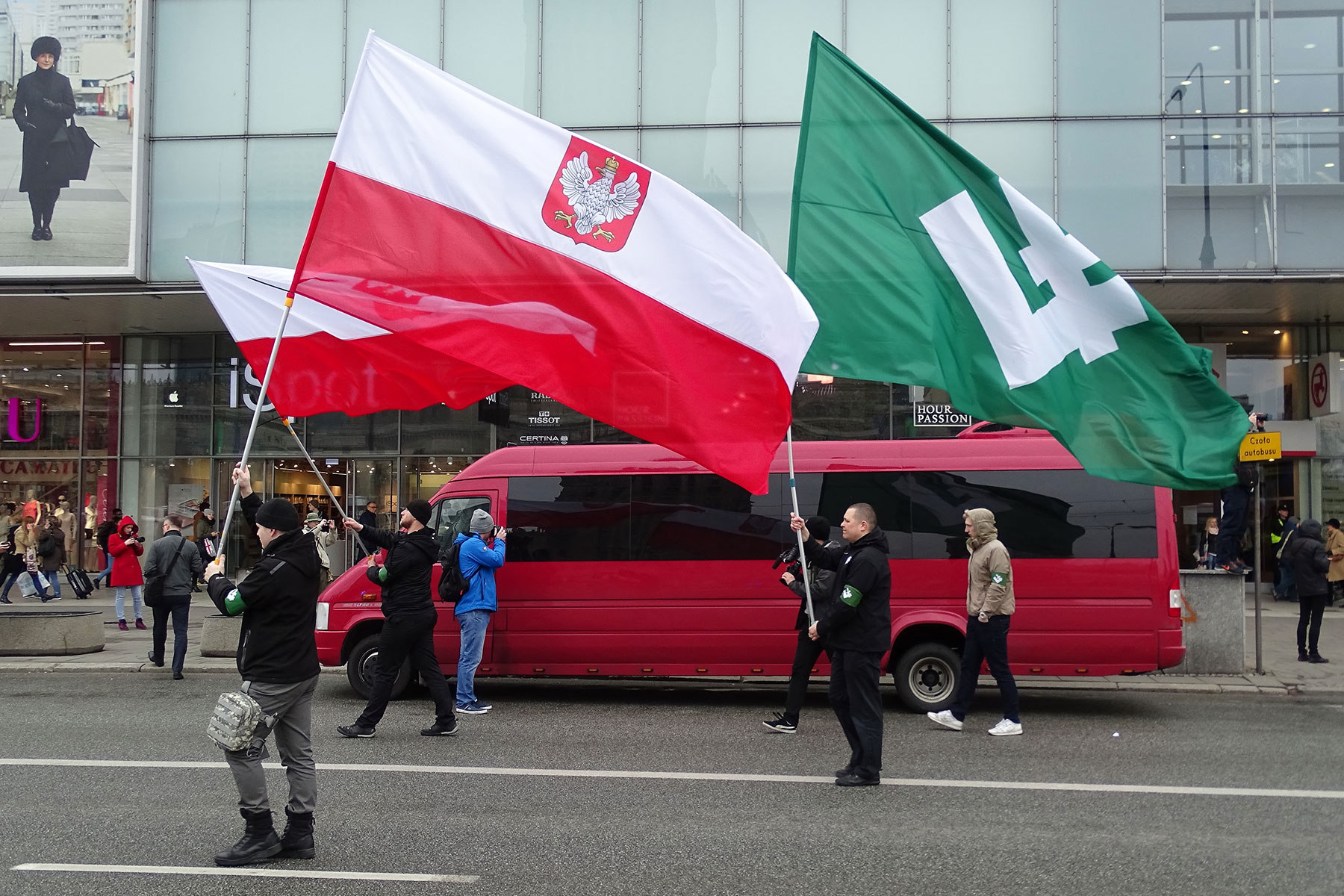 It should not come as a surprise that in Poland, a country where “Catholicism has gained institutional status and an official place within civil society,” religion is being exploited for political activism, including radical ones.

Of course, not all nationalist far-right groups have connections with religion and the churches, but in contemporary Poland, the majority of far-right organizations are considered Catholic. According to one expert on the Polish nationalist movement, Catholicism in its nationalistic depictions has various dimensions — civilizational, moral, historical and political. This makes Polish right-wing groups an exception and an interesting topic in the field of studies on the far right, particularly as, for some scholars, “religion remains conspicuously absent in concepts of the radical right.”

The National Radical Camp (ONR) serves as an example of how a far-right group frequently uses religious argumentation in its political activity. Strong attachment to God is part of the ONR’s ideological guidelines. The first point in the guidelines called, “Salvation — an ultimate goal of a human being” can be perceived as ONR’s confession of faith. The group says that these guidelines are the commandments of “the traditional Catholic Church” that lead people to discover truth. Belief in God, as an undisputed principle, also becomes a guiding rule in political life. The group further states: “Highlighting the enormous role of Catholicism, which for thousands of years has been a cultural principle, a pillar of Polishness and an anchor of national identity, we pursue the vision of Great Poland as a country soaked with Catholic spirit.”

The idea of building a nationalist program on a firm religious base extends into the ONR’s publications, both online and in print. For example, in the group’s National Horizon magazine, there is an article on the above-mentioned first ideological principle. Since the contemporary ONR is inspired by another organization operating under the same name in the 1930s, the piece highlights historical continuity. Belief in God and obedience to religious principles are seen as an inherent part of the nationalist tradition.

An important point of reference for the author of the National Horizon article is Pope Leo XIII and the pre-conciliar church and customs in general. The author notices new challenges for the church and Catholics, especially the modernist movement within the church, claiming that “the modernists took our holy mass away.” Liberal democracy is listed as another contemporary threat. The author of the article goes on to claim that this political system fools people with ideas of freedom and civil liberties. Therefore, Catholic priests “raised in liberal spirit” cannot be seen as ONR’s allies.

Interestingly, the application form for those wishing to become a member of the group includes a question about their attitude toward the Catholic Church. Religiosity might therefore be one of the decisive factors in the admission process. This appears important for recruitment since many activities organized by the group include religious practices. Wreath-laying ceremonies or other occasions, gatherings of ONR’s members and followers on various anniversaries, and celebrations of historical events are usually accompanied with prayers or followed by attendance of holy mass. ONR’s regional divisions also gather for a common Christmas Eve supper or to visit cemeteries on All Saints’ Day.

Although these activities do not seem like standard practice within the far-right scene, they might be treated as a characteristic of many other Polish groups. In her work, scholar Dominika Tronina scrupulously tracked similar religiously focused activities of another far-right group, the All-Polish Youth. Of course, in Catholically oriented groups, religion is also used to support specific political positions, matters concerning the family or certain conservative educational policies.

The Polish Radical Right and Wider Trends of Secularization

Ardent Catholicism of far-right groups in Poland becomes even more interesting as we acknowledge that the religiosity of Polish society is currently on a downward trajectory. The recent publication of the opinion polling institute CBOS leaves no doubts about this trend, especially among young Poles. Public opinion polls show that the percentage of people between the age of 18 and 24 describing themselves as religious fell from 93% in 1992 to 71% in 2021. This means that the proportion of declared young non-believers tripled within this period.

At the same time, religious Poles have become less scrupulous in the practice of religious rituals. The percentage of young people regularly going to mass or practicing their religion dropped from 62% to a mere 26%. The trend can be seen within society as a whole — with a decrease of believers from 94% to 87% in the last quarter century — but it is strikingly evident within younger generations.

The new quantitative evidence summing up the secularization process of the last 30 years surprises even Poles themselves. What has been discussed and suspected has now been proven with exact numbers. Although the phenomenon deserves deeper understanding through research, several possible explanations have made their way into public debate in recent months.

One of them is the impact of the COVID-19 pandemic on the religious practices of Poles. Since the outbreak of the coronavirus in 2020, entrance to churches has been temporarily restricted and many people have become used to practicing their religion at home. Another reason is a growing negative assessment of the church and clergymen due to the surfacing of sex scandals, both in Poland and abroad.

It might also be hypothesized that many Poles are simply tired of the instrumentalization of religious arguments, which have repeatedly been used as justification for political (and social) decisions. For example, the clash of religious and non-religious motivations became apparent during recent debates over changes in Polish abortion laws. Decreasing acceptance of the intertwining of public life with religion is also evident when looking at the number of students attending Catholic catechism classes, falling rapidly in recent years.

The increase in secularization could have an impact on many aspects of social and political life in the future. Since Polish far-right groups attract predominantly young people — who are increasingly secular — it might be interesting to observe whether decreasing religiosity of society will have an impact on the activities of ONR and other similar groups.