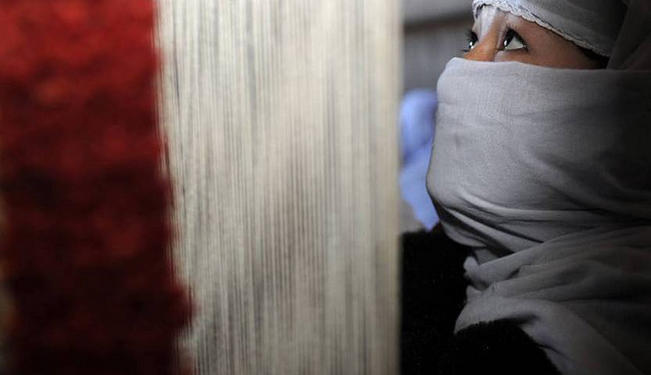 With the traditional role models slowly shifting, women entrepreneurs contribute greatly to a changing Afghanistan society.
Women are some of the most vulnerable members of Afghanistan’s society. Afghan society has found it difficult to include women in development and entrepreneurship activities. However, owing much to the motivation of women, the situation has been changing, with more and more women striving to take part in these activities.

Women have always responded creatively to the overall domination and traditional oppression that has shaded their lives in Afghanistan. Throughout the turbulent history of Afghanistan women have tended homes, bore children, mourned the losses of family members and friends have had to cope with challenging situations brought upon them by men.

However, this is not to say that women have not played important roles within society. Women are often the source of sage advice and are central to securing income for many households. This is especially true in rural areas, where women have traditionally worked hard to supplement the meager earnings of their male relatives. For many of these rural families it is the work of women, like weaving handmade carpets, handicrafts, tailoring, cooking, farming and pottery, which provides the main source of income .

Yet on many levels Afghan society has not been kind to women. Although few do enjoy a level of freedom within the family domain, they are not free to express themselves politically or within the community. This has been the main reason why women have not been able to communicate with the market and receive feedback which would  improve the quality of their product and open doors to increased income opportunities.

Despite the hard work of women behind scenes, men have always represented women in the market and workplace in Afghanistan. Afghan society recognizes men as the producers of finished goods, although there is a tacit understanding that it is actually women and not men who produce all these goods. However, over the past decade there has been a major shift in this trend.

The Changing Role of Women

There are three main reasons as to why this shift has occurred: firstly, the extreme levels of oppression exerted during the Taliban occupation from 1994 to 2000. During these years women silently revolted against this oppression by producing all sorts of products despite their limited access to the outside world.

Secondly, the harsh economic situation that has left a large number of men unemployed has meant that the need to sustain families has led to innovative avenues where women substitute men as the family breadwinner and primary source of income.

The third reason stems from the attention that has been given by international relief organizations to consolidate networks of women who have started to pool their resources together to build successful businesses with the ability to cater to large orders with the potential to export niche cultural handicrafts. These major steps have changed the status quo of the Afghan women giving them some degree of voice in the family as well as in the level of the society. Financial independence and economic power of women is the beginning of a phenomenal shift in structure of the family and society.

During the rule of the Taliban a small number of women were able to travel outside the country, to India, and received training in entrepreneurship. Upon return, they established a number of small to medium sized enterprises that organized the work of hundreds of women and connected them to the market.  This caught the attention of many other women and such initiatives have taken off on a huge scale. There is currently a wide range of products, including clothes, socks, carpets, traditional ornaments, pottery and a variety of handicrafts that are produced exclusively by women, with many of these products reaching the markets of Europe and the US.

Women departments administered by the Afghan government have introduced a number of self-employment schemes for women across the country that have the potential to generate considerable revenue for families.  In 2007, for example, the women affairs department in Kapisa province started a project including 20 women farming organic saffron on public land. In 2010, this grew to include approximately 336 women in three districts of this province.

The same department has established agricultural projects and commercial production units to tailor uniforms for governmental and Non-Governmental Organizations (NGOs). These examples and other similar projects have benefited hundreds of families.  Most of these projects have been simulated and expanded to other secure provinces mostly in the north, west and south western parts of the country.

In addition, this department has facilitated small loans through which women can start projects of their own and return the loans in small installments. Some families have developed their farms and livestock so that they can generate some revenue, earn a living, pay a mortgage and after some time find themselves owning all the property and livestock. These projects have created a favorable environment for entrepreneurship and the re-distribution of land. Land reform project (funded by USAID) is another initiative that will significantly influence the property rights for women and minorities.

Out of the 2000 non-profit organizations registered by the Afghanistan Investment Support Agency (AISA), 905 of them are organizations working on women rights and welfare, most of which are promoting women’s health and empowerment programs through a variety of projects across the country; however, these programs benefit a small portion of women in every region but the message and implication of these projects have a valuable affect on the empowerment of women in general.

Apart from these small projects implemented in the rural areas, the representation of women in urban area has significantly changed in some regions. There are plenty of educated and creative female entrepreneurs running NGOs. These new generation of women have either been self educated or lived in liberal and open-minded families that supported their education. These women led non-profit organizations have now provided employment for hundreds of women. Some of these organizations simply connect individual female producers to the market and charge a small administration cost. This allows women who are for various reasons housebound, to work at home but to still be able to get their products to the market. The regime change in 2001 brought a revolution in the realm of education for women. Over 40% of women are involved educating themselves. This has offered a great opportunity for them to boost their role in market economy and social entrepreneurship.

The male dominated society of Afghanistan still considers men to be the breadwinners of the family. Recognition of women at any level of leadership with social impact or individual productivity as entrepreneurs threatens the traditional hierarchical position of men, which is particularly difficult for men to accept. At a time of high rate of unemployment, this tension arising from male pride and traditional order is the main obstacle that challenges the inclusion of women in business and leadership roles within society.

After six years of Taliban oppression in the country, this wave of women entrepreneurs has proved to be the best agency for women’s empowerment and financial autonomy.