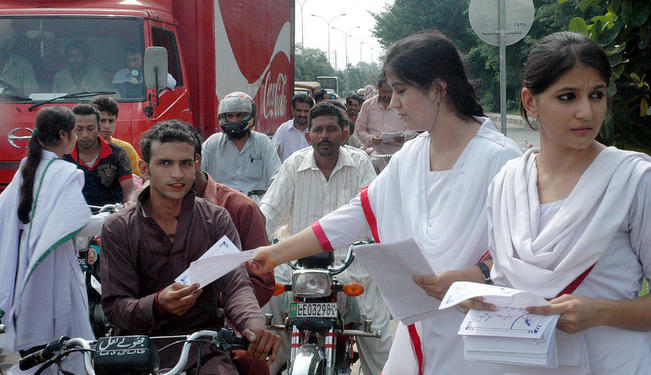 As Pakistanis cast their ballot, Asim Jahangir and Huma Khan pose the question: Can female voters change the outcomes of the country's general elections?

Pakistan is due to commence its 10th General Elections to elect the National and Provincial Assemblies. As political parties prepare to lock horns for electoral support, they face an uphill battle of getting the voter to come out and vote. Voter turnout in Pakistan has been dismal with only 44% registered voters coming out to cast their ballot in 2008. Given the emergence of new political forces and the consequent split in traditional voting banks, the party that is able to convince most voters to vote is likely to gain a dominant hand in the general elections. Amid these challenges, a large and untapped reservoir of voters — the female voter — can play a decisive role in the polls.

Elections are run and fought for the male voter. If you ask a common man on the street, or the political parties campaigning for elections, it is generally assumed that women vote for the same candidate as the male head of the household. As is the case with all myths, this one is also not based on empirical research. Contrary to this common perception, our analysis of data from the 2008 vote reveals a unique finding: A substantial proportion of female voters do choose candidates who differ from the male head of the household's choice.

A true democracy should ensure equal participation of all citizens in the electoral process. A representative democracy is built on the principles of representation of different viewpoints and interests. While women make up 47% of the total population, their participation in elections is disproportionately low. Women are underrepresented both as elected representatives in national and provincial assemblies, and as voters.

In a weak democracy like Pakistan, women are less likely to run for office and to come out to vote. If we look at the history of women's political empowerment in Pakistan, since the 1970s, policymakers and women's groups have focused their energies on having more female presence in the elected assemblies. The 1973 constitution allocated 20 seats for women in the National Assembly. However, once the constitutional provision expired in 1988, there was no quota for women. Given that our democratic institutions did not strengthen during that time period, and neither did the mass female population feel that the women sitting in parliament were representing them, in the absence of quotas, the proportion of women in the parliament fell sharply. This sharp decline clearly indicated that the quotas had not systematically influenced female political participation at the grassroots level as they were theoretically intended to.  It comes as no surprise that the status of an average Pakistani woman saw little to no change during the 1990s, despite electing a female prime minister.

Once again, in the wake of the new millennium, issues pertaining to gender empowerment gained momentum.  After a long campaign by women's groups in Pakistan, in 2002, 60 seats were reserved for women in national assembly with an additional 128 seats in provincial assemblies. In 2008, a total of 77 women were elected to the national assembly, making 22.5% of the legislature. The increase in female representatives coincided with a greater number of bills concerning women issues which surfaced in the National Assembly.  Indeed, it has been a leap forward for 50% of the Pakistani population whose interests can now, at least in books, be voiced by the 22.5% percent legislature allotted to them.

One would expect that the improvement in the legislative sphere seen in the past decade will translate into a more vibrant space for women to participate directly in politics. In reality, despite guaranteed political representation, female voters occupy a decreasing share of total voters in Pakistan. In 2008, the voter turnout for females was around 38% — compared to almost 50% for male voters. Thus, for every 100 men, only 78 women cast the ballot. Females are not only underrepresented in the elected assemblies, they are underrepresented as a political entity. According to the latest figures from the Election Commission of Pakistan (ECP), there are 34 million registered female voters compared to 46 million male voters. Not only is the number of female registered voters lower than men, it has also fallen since 2008. Compared to 2008, there are 1.2 million fewer female voters registered for 2012; the numbers of male voters, on the other hand, has increased by 1 million. Hence, women constitute a decreasing share of voters in Pakistan. The share of registered female voters has declined from 46% in 1970 to 44% in 2008. Worst still, based on the latest numbers, the proportion is expected to fall to 42% in 2013.

So, the question that arises is: Why are women at the grassroots becoming more disillusioned by the political process? Historically, neither government policies, nor the political parties have focused on the female voter. The dominant perception is that the female voter does not come out to vote, and when she does, the male head of the household clouds her choice – making the female vote redundant. Is that really true?

At the national level, male and female voters have different candidate choices. Our research has found that women have voting patterns independent of the men in the same electoral district. What is more interesting is that women are more likely to vote for a losing candidate, while electoral districts with higher female voter turnout are likely to have a closely contested election. If more women come out to vote, not only can we ensure representation of their voices in the political process, but a higher female electoral participation is also more likely to make the electoral process more competitive and hence strengthen democracy.

What do these findings imply for political parties in next elections? The 2013 elections are poised to be highly competitive. The rallies earlier in the year have shown that all political parties are bent on maximizing voter base well in advance of the vote. However, parties that are able to get female voters out to vote will definitely gain advantage. This advantage will be crucial for candidates contesting against dominant incumbents.

So, what do we suggest? Simply, to reach the women at grassroots level and encourage them to vote. A politically inclined information campaign that encourages women to vote will not only increase the voter turnout and make the democratic process more participatory, but also turn the nature of the battle. If harnessed efficiently, female voters would be the next political force in Pakistan.