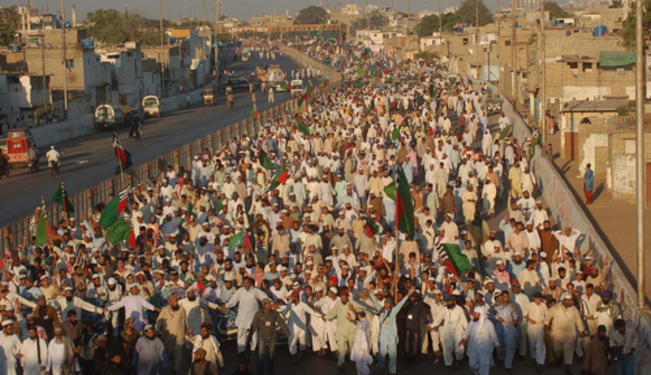 An examination of the Okara movement challenges hegemonic discourses of religious extremism and militancy in Pakistan. This is the second of a three part series. Read part one here.

An examination of the Okara movement, which served as a serious challenge to the oppressive power of the state, contributes to a more nuanced understanding of ordinary Pakistanis in their struggle for self-determination, emancipation and economic well-being. In so doing, it moves beyond clichéd understandings of one of the most populous countries in the world and challenges hegemonic representations of the Pakistani polity.

The Okara Military Farms are part of the canal colonies in Punjab province of today's Pakistan developed by the British Raj in the latter half of the nineteenth century. Agricultural and non-agricultural castes from eastern Punjab were encouraged to settle in these colonies and elites which had helped the British during and after the Indian Uprising of 1857 were rewarded with large tracts of land in these areas (Ali, 1988). Vast areas of land owned by the provincial Punjab government were also leased out in Okara and adjoining districts for use of the British military which included stud farming and horse breeding. These lands were used by the colonial state in its extensive patronage network to ensure the loyalty of the landed and military elites as an insurance against the Bolshevik threat from the north-west. At the time of Partition in 1947, these lands were automatically transferred to the Pakistani military. Although the British had lured the agricultural peasants to the canal colonies with the promise of allotting them land in return for tilling the soil, these promises never materialised and several generations of peasants and farmers worked on these lands under a sharecropping system (called hissa battai) whereby the farmer and his family kept half the produce, while the military took the other half (Akhtar, 2006).

In 2000, just as the military government of General Pervez Musharraf was consolidating its power and planning to pass a law for further corporatisation of agriculture, the military authorities in Okara decided to introduce a new contract system which stipulated that rent was to be paid in cash rather than direct division of farm produce. Moreover, the new contract contained provisions which severely limited use of natural resources by the farmers who depended upon local firewood and mud for building homes. It also contained provisions which would have made it extremely easy for military authorities to evict farmers and peasants on short notice.

Sensing an attempt by the authorities to legally evict them from them from the land they had lived on and tilled for generations, farmers formed the Anjuman-e-Mazareen-e-Punjab (AMP, Punjab Tenants Organisation) through which they hoped to persuade the military to give up its intentions of a new cropping agreement. The authorities, however, taken aback by the temerity of the farmers who dared to stand up to its might in the heartland of its traditional stronghold of Punjab, used paramilitary forces and the police to besiege eighteen villages in Okara district. The increasing incidences of torture, intimidation and harassment resulted in a spread of the movement to adjoining districts of Punjab and the AMP soon morphed into a kind of 'rural intifada' with a more militant organisation representing farmers, peasants and small landholders (Ali, 2003). As the military's excesses increased, the movement grew bigger and went up to over a million strong with cross-gender and cross-religious alliances challenging the hegemonic power of the Pakistan military in its own backyard. During the struggle it was discovered that the military were not the legal owners of the land and were only lessees of the land themselves on which they had not paid rent to the Punjab government since 1943! This knowledge, combined with the oppressive response of the military, led the AMP to adopt the powerful cry of 'Malukyat yaa maut!' ('Ownership or Death'). Through a tactic of civil disobedience and sheer people power, the AMP managed to fight the military off the land. Today a stalemate exists, with farmers and peasants refusing to pay any rent and the military continuing a low-level program of harassment even though formal democracy returned to Pakistan in 2008 (Toor, 2011). In an interview in 2009, the premier spokesperson of the military even conceded that it is willing to go back to the original sharecropping agreement.

The movement defied popular representations of Pakistan and was symbolic in several ways. Firstly, the movement saw peasants and farmers from across the religious divide come together. 40% of the AMP membership consisted of Christian peasants and farmers who have generally occupied the very lowest rung in the Punjab's caste hierarchy. Second, when the military's suppression increased and the farmers and peasants started getting illegally detained and tortured, it is the women who rose up in resistance and led march and protests with their thappas (sticks used to beat dirty clothes while washing) in the air. These women came to be known as the Thappa Force and resulted in a mass empowerment of women which led them to challenge not just the repressive apparatus of the state but also entrenched structures of patriarchy and religious-based discrimination. When Munawwar Bibi, the Punjab President of the AMP, was threatened by local landlords that they would not give her a Muslim burial because as a woman she was fighting alongside Christians, she sent them a reply saying:

'After my soul departs, the Christians will take me to their graveyard. Do you think I am fighting for a burial spot?'

Moreover, post-AMP mobilisation enrolment of girls in schools in the area has increased and women have refused to go back to the same position of subordination that they were in before they stepped into the battle with the state (Shirkat Gah Documentary, 2010).

Enduring colonial patterns of military recruitment and critical support by capitalist powers have resulted in the Punjab province being the center of the military's power base in Pakistan. Due to the peculiar nature of the Pakistani and Bangladeshi post-colonial state (with an under-developed native bourgeoisie and a top-down imposed colonial state), a civil-militarybureaucratic oligarchyhas come to dominate what Alavi has termed 'the overdeveloped state' (1972). Developed during the British Raj with the express intention of 'controlling the natives' and extracting resources for the mother country, the 'over-developed state' continues to retain the existence and pervading mechanisms of control and oppression developed during the era of formal colonialism. Moreover, Alavi posits that due to its grafted nature, it is the state itself which has become the site for contestation between competing interests. It is in this context of the hangover of colonial institutions and the AMP's refusal to seek redress in colonial-era institutions of justice and law that the Okara peasants' struggle signified an unprecedented challenge to hegemony of the state and its military-centered post-colonial elite.