Many Indians rejoice in the universalization of yoga, yet some are alarmed by its commodification.

What is it about the Guinness World Records that makes Indians dizzy with anticipation and sends them on a bizarre journey of self-gratification?

A number of public commentators, among them a New York Times correspondent, appear to have stumbled upon this phenomenon in recent months, but it is something that struck my attention nearly 20 years ago.

Indian Prime Minister Narendra Modi is a man who is rather keen on records. Witness, for example, the infamous jacket on which his name had been embroidered with gold color thread in stripes, or the construction that is afoot to build the largest statue in the world just outside Baroda—a monument of faith and folly to Sardar Patel, the architect (as the statue seeks to recognize) of Indian “unity.” In 2014, apparently at Modi’s behest, the United Nations General Assembly agreed to designate June 21 as International Yoga Day.

And so it was celebrated this June.

There is much that is newsworthy about the events that transpired, not the least the fact that yoga may be India’s most successful and globalized spiritual commodity.

Therein lies the source of an anxiety that success has ironically generated. Even as many Indians—or rather Hindus—rejoice in the universalization of yoga, some are also alarmed by its commodification, giving little thought to the fact that globalization and commodification go hand-in-hand. And indeed there are others, the self-appointed guardians of the faith, such as the relatively young and cocksure acolytes of the faith who staff diasporic organizations of the likes of the Hindu American Foundation, who have strenuously sought to wage a war against those who—stripping yoga of its purported roots in Hindu traditions or what is vaguely described as Indian/Hindu spiritual traditions—have embraced it purely as a system of exercises and meditational techniques.

International Yoga Day, however, was most interesting for something altogether different, namely an attempt in Delhi, spearheaded by Modi himself, to bring laurels to India by having the country set two new records that would merit mention in the Guinness Book of Records. In the matter of records, at least, Indians recognize a copy or a cheap imitation when they see one, and the truly aspiring Indians who seek what they think is global recognition have never settled for the Indian Book of Records or the Limca Book of Records.

Never mind the fact that some who have sought to blaze a trail of glory by having themselves recognized as the holder of a world record are probably clueless about Guinness and might even be teetotallers. They are certainly knowledgeable enough about the fact that an entry in the Limca Book of Records isn’t going to earn them any cultural capital.

Modi and his ministers were, moreover, resolved that International Yoga Day should be marked by India claiming, in some distinct fashion, ownership and exclusive authorship of the idea of yoga. Bikram himself has only attempted to patent certain asanas or, to be more precise, his particular style and even the milieu for yoga—the temperature of the room in each and every Bikram yoga studio is set at 40.6 Celsius or 105 Fahrenheit. But what the Indian government seeks to do is to patent the very idea of yoga.

One government official interviewed recently on the subject of India’s preparations for the celebration of International Yoga Day admitted that the prime minister is “insistent that the event makes an impact internationally.” Another official at the newly created Ayurveda, Yoga and Naturopathy, Unani, Siddha and Homeopathy (AYUSH) ministry, charged with organizing events for the momentous day, described his team as “trying very hard to get the record set but the rules of the record are tough.”

On the anointed day, Prime Minister Modi decided to lead the country by example. The photograph published in The Hindustan Times the following day captured the event well: The leader must be part of a collective and yet singular, showing both his affinity with the masses and his ability to guide and inspire them.

Here he is at the head of the masses: Strikingly, it is a group of women, the cadres who one is tempted to say form the storm troopers of his movement, who are immediately seated behind him in rows. Much more can be said about the photograph and the interplay of masculinity and a feminized nation. But what is not less striking is that Modi and the thousands who followed him in this orchestrated display are seated on the Rajpath—the Path of Kings—a colonial thoroughfare now appropriated in the service of a rejuvenated and disciplined nation.

Nearly 40,000 women and men—35,985 to be precise, since to deal with records is to give one’s allegiance to precision—followed Modi, thus establishing a new world record for the largest yoga class and eclipsing the old record which was set in November 2005, when 29,973 students attended a yoga class, drawn from 362 schools, at the Vivekananda Kendra at Jiwaji University, Gwalior, in Central India. Shripad Naik, the minister of AYUSH, declared that “it is a matter of pride for India that we have broken two records in one day.” But Naik neglected to say that the second Guinness World Record noted (but not yet officially recognized) at that day’s yoga event—namely the presence of nationals from 84 countries—did not previously exist. It is doubtless an interesting and perhaps impressive fact that nationals of seven dozen countries thought it fit to become part of history (to use the common idiom of our times), but no record was broken.

“A Nation of Freaks”

One suspects that this second record is much like the attempt to introduce kabaddi—a contact team sport which, to invoke a very personal definition, is yoga on the run and revolves around strategies of breathing and tagging one’s opponents—at the Olympics. Since India is generally starved for medals, kabaddi is nearly a fool-proof way of ensuring that India does not appear at the rock bottom of the medals tally, alongside the Ivory Coast, Bhutan, Zambia and the like. As the entry on kabaddi on Wikipedia states: “India is the most successful team on the world stage, having won every world cup and Asian Games title so far, in both men’s and women’s categories.” Kabaddi is, however, only played in South Asian countries and among some of the more enthusiastic diasporic communities from the Indian sub-continent.

We are, of course, still far from understanding what is it that prompts Indians to make a run for the Guinness Book of Records. In my first ruminations on this subject, I wrote thus:

“A certain anxiety, first generated during the colonial period, and subsequently aggravated by the process of nation-building, over masculinity and the manliness of a people, no less of a nation, must also account to a great degree for the quest among Indians to have their names etched in the Guinness Book. Part of the ethos of manliness consists simply in gaining recognition, in being acknowledged. One long-lasting effect of colonialism has been that the Indian continues to look up to the white European male, who confers recognition upon inferiors, and who has established the standard that the Indian (like other formerly colonized people) must meet. That is the canonical truth, the qanoon of this world.”

However, as I then argued, and would still insist upon today, the matter is considerably more complex, since many of the records established by the Indians—for running backward over the longest distance, for having the longest fingernails or for standing for a period of 17 years—are profoundly disturbing to some Indian elites, who would much rather see India recognized for “genuine achievements” rather than be dubbed a nation of freaks, charlatans and eccentrics.

*[This article was originally published on the author’s blog, Lal Salaam.] 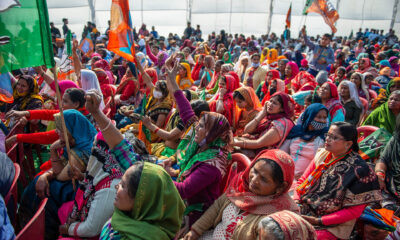