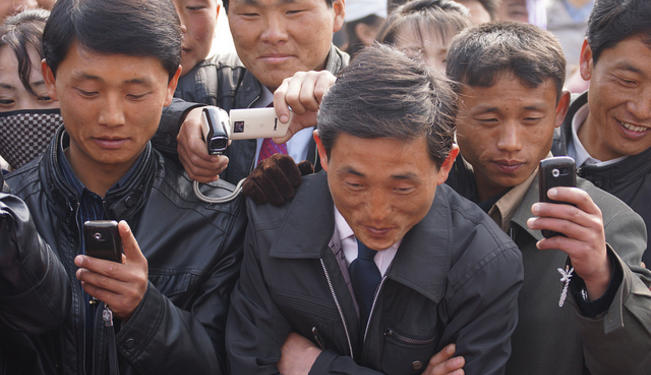 North Korea is again at the center of international attention due to assertions that its leadership is pursuing a program of enriching uranium in order to add more nuclear weapons to its current stockpile. In the context of the United States’ military’s ongoing “Asia Pivot,” and the disquiet of North Korea’s neighbors at the prospect of a nuclear arms race in East Asia, gaining a strong understanding of North Korea and its society remains a top priority for international affairs professionals and the global public alike.

Nicholas A. Heras:Is North Korea important to the international community only because of its nuclear weapons programs?

Michael Bassett: I see the international community focusing on nuclear weapons, and human rights, more than anything else, so it does seem that way. I would like to think that we would care about their existence as fellow human beings if they were isolated and in desperate conditions, and if they had no nuclear weapons or human gulags, but I really doubt that we would care otherwise. We should though. North Koreans are human too, and they have a wonderful culture. I always encourage people to experience North Korean culture through a tour of their social media sites before they judge them after listening to the sensationalist media culture in America, or reading some ultra-liberal college textbook here in the USA that doesn’t see “the forest for the trees.”

Heras: Building off your point of not missing the “forest for the trees,” what are the largest misconceptions about North Korea’s leadership as rational actors in the international system?

Bassett: The largest misconception is that the international community thinks that the North Korean leadership enjoys having their country exist in the state it does, especially since Kim Jung-Un succeeded in transition to dynastic power. It’s safe to say that the international community thinks that North Koreans are irrational. I thought so too on my first encounter with them.

While stationed on the DMZ, I heard propaganda all day from across the Imjin River. I was alerted on hundreds of occasions, and once, when a defector crossed, she spoke to our entire camp about what life was like for her in a political prisoner camp for 13 years of her life after being accused of stealing a box of pencils. As a result of that night, I spent the next ten years of my life trying to understand North Koreans.

When I gave my final presentation at Yonsei University on North Korean Government and Foreign Policy, I proposed my “Abused Person Hypothesis” as an analogy to define them as a rational actor. If you are treated as a non-person who is locked in a prison and starved your entire life, and called bad names, and treated as if you were bad for being in such a state, then you would behave in ways people would not likely understand and you’d be likely to be ostracized. Now, apply this metaphorical, but very real, experience to North Korea, and compound it with their history of being a “speed bump” caught in the middle of thousands of years of wars in Asia, then you can easily understand why their number one goal is survival of their way of life.

To me, the North Korean response is quite rational. As a constructivist, I tend to take their historical development and worldview into account, as well as I can do it, trying to place myself in the shoes of the North Koreans. That has helped me to understand them in ways that most people aren’t even comfortable with.

Heras: What would constitute the survival of North Korea’s “way of life”?

Bassett: It is my opinion that every citizen in North Korea is the victim of human rights abuse, and those in the gulags are the most miserable victims of the abuses. They are the outcasts that the regime values least critical to its survival. By demonizing the regime for having gulags, the international community not only ignores everyone else who is a victim in North Korea, but it influences policy that results in the further deterioration of the regime as a whole. When conditions deteriorate, everyone suffers.

With fewer resources to survive, everyone ends up in gulags. In the gulag, unlike prisons in the United States, the state isn’t responsible for keeping prisoners alive. They must fend for themselves. Gulags are part of the nasty machine that is a result of that policy. The system is so fragile that they have opened for tourism because even a small group of ten tourists impacts their economy. North Korea is a sovereign nation, whether the international community likes it or not, and by being a sovereign nation they have the right to survive by default of being a unique nation and culture.

If we look at North Korea as being a human being, we could say that when the human starves it would be rational for him to eat his own arm. It doesn’t seem rational for someone to punish someone for “eating their own arm” if they were isolated and starved. Many North Koreans die of Pallegra, a disease that occurs as a result of eating corn all the time. The skin on the hands get callous, their finger nails fall off, their facial skin hardens, they get cataracts; and then their stomach hardens and they can’t digest food anymore so they die. The solution is to eat meat, which sadly is only really available in the form of rodents, canine, or felines.

Whether an individual person or state, everyone has the right to exist by any means possible. I hope that one day that North Korea’s attempts at survival are less drastic, but that will depend upon the policies that are created as a result of the international community’s perception of North Korea.

Heras: What internal pressures would change North Korean society, and how would it change?

Bassett: North Koreans do not expect change to come from the outside world. Since Russia fell, and China normalized relations with the US and entered their industrial revolution, North Korea has had very hard times. They've endured soil erosion, famine, draught, sanctions, embargoes, and their very existence has been threatened on a daily basis. The juche ideology is all about being self-sufficient, but it is up to theoretical debate as to the definition of "self-sufficiency", and Kim Jung Un is the only one legally allowed to theorize on juche. He has been exposed to the west, having lived in Europe for several years. Jang Sang Taek [a North Korean General considered to be the second most powerful person in North Korea] is infamously technocratic, and his major was economics. These two worldviews have resulted in a drastic culture shift in that short time.

The military has been used for beautification and development, especially in regards to housing projects and recreational parks. Tourism now constitutes one of the largest legal industries in North Korea. The North Korean government now has official Twitter, Facebook, Flickr, and YouTube accounts. Some North Koreans have computers, even good ones, like iPads. Many have cellphones and TVs. The regime seems to be desperately trying to get the world’s attention on a more human level. It is using social networking to reach out. If the North Korean government succeeds in getting the world’s attention on all the other aspects of their way of life, besides nuclear weapons and gulags, then perceptions of it could change; and hopefully one day normalization of bi-lateral relations could take place, and then within about 15 years from that, the peninsula would be capable of achieving unification.