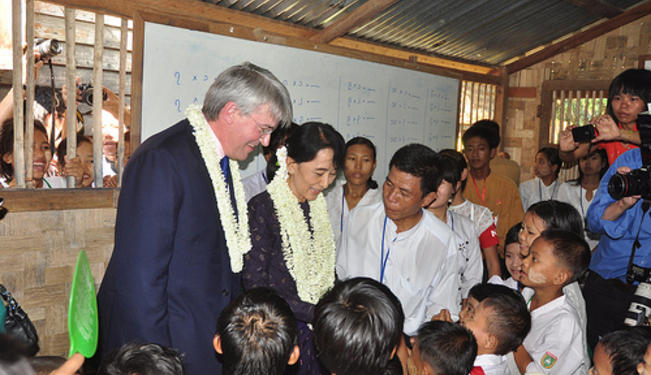 Myanmar has made leaps of progress in its political and social development scenes, and there is much that actors both inside and outside the country can do to further this.

Addressing a throng of supporters gathered to celebrate the National League for Democracy’s dazzling victory in the April 1 by-elections, Aung San Suu Kyi looked forward to a “new era” in Myanmar politics. But how much change is likely now that this iconic opposition leader is set to take a parliamentary seat on April 23? And how can individuals inside and outside the country bolster prospects for reform?

Much has certainly happened in Myanmar since March 2011, when an entrenched military junta ceded power to a notionally civilian government led by President Thein Sein. Many political prisoners have been released, peace talks with most ethnic minority groups have been put in motion, censorship has been considerably relaxed, rational policymaking has been undertaken, and the voice of the people has sometimes been heard. Most stunning in this latter regard was a September 2011 presidential decision to suspend a large Chinese dam project, in response to growing public discontent.

Yet the direction in which the country is currently heading remains uncertain. For years now, military leaders have busied themselves with instituting “discipline-flourishing democracy”, holding that this is the only form of participatory politics appropriate to a state riven by ethnic and political cleavage. By contrast, opposition leaders have always sought to push for democracy pure and simple. At present, both options remain very much on the table.

The key aspects of praetorian democracy include reserved military powers in government, parliament, national budgets, and so on. All of these elements are constitutionally mandated in Myanmar, where army leaders are given untrammeled executive control of national security, extensive legislative oversight through appointed seats in national and regional assemblies, and special provisions in the budgetary process. None of the changes witnessed in the past year challenge any of this.

The task facing opposition leaders is therefore substantial: not only to win seats under what Aung San Suu Kyi terms an “unjust” constitution, but also to engineer fundamental reform of that constitution, alongside changes to the legal system, and the territorial distribution of power. The first real chance to do any of that may not come until November 2015, when full parliamentary elections are scheduled to take place.

In the meantime, though, much work can be done to tilt the reformist balance away from authoritarian democracy to something more open, vibrant and real. Indeed, throughout the past decade and more, civil society has slowly been rebuilt from the ashes left by severe military repression. When Cyclone Nargis killed at least 138,000 people in May 2008, it was local organizations that played the key role in spearheading relief efforts. Ever since, civil society has gone from strength to strength.

It is in developments such as this that most hope for lasting change is placed. Throughout the opposition movement, from Aung San Suu Kyi through veterans of 1988 student protest to grassroots activists, the shared belief is that democracy will be sustained only on the basis of an energized civic culture. Lasting political reform cannot simply be a graft affixed by elites, but must reach deep into the society.

For outsiders looking in and wanting to help, the core objective is thus to support the local processes of change that are palpably transforming Myanmar. As is increasingly recognized, isolation strategies implemented through sanctions are unlikely to be helpful. Both the US and the EU are now scaling back their embargoes. Rather, the need is to develop constructive forms of engagement that reinforce dynamic local action.

Some vital work will be done through direct investment in civil society. At no more than 10% of per capita spend registered in similar development contexts, aid budgets have long been scandalously low and must be boosted through enhanced funding for local NGOs and CBOs. Some will be done through technical assistance designed to help local leaders further develop civic groups, reform the dominant rural economy, establish a secure legal framework for business, and build a social welfare system. Some will be done through external support for efforts to build peace across ethnic and political divides.

Also critically important will be a new framework for inward investment, which in sheer dollar terms is certain to swamp any other form of foreign engagement. In extractive sectors, transparency initiatives must be implemented to ensure Myanmar’s abundant natural resources are exploited for the benefit of the people, and not simply a handful of cronies. Throughout the economy, attempts to implant a culture of corporate social responsibility must be promoted by major multinationals. Already, Chinese oil and gas companies are starting to mimic a pioneering socioeconomic program put in place by French giant Total.

Clearly these action agendas are all huge, and will pose enormous challenges for a country still at a fragile early stage of reform. However, if local leaders are able to secure external assistance in implementing these sorts of changes, Myanmar will be well placed to make the shift from regional pariah to the regional leader envisaged by Aung San Suu Kyi. Genuine grassroots engagement would give real meaning to the country ownership that has been so elusive in much of Southeast Asia. True national reconciliation would generate important demonstration effects across the region. Full democracy would be an important exemplar in a neighborhood often falling far short. Active corporate citizenship would be a welcome development of Asian business cultures.

A year of remarkable change in Myanmar has been led by Thein Sein, embraced by Aung San Suu Kyi, and buttressed by a wealth of actors throughout the society. The desire shared by many is that these will remain the key figures in the years ahead. Nevertheless, outsiders can also play an important role in helping to ensure that discipline-flourishing democracy becomes not an end point for reform, but rather a way station on the road to fundamental political rebirth.