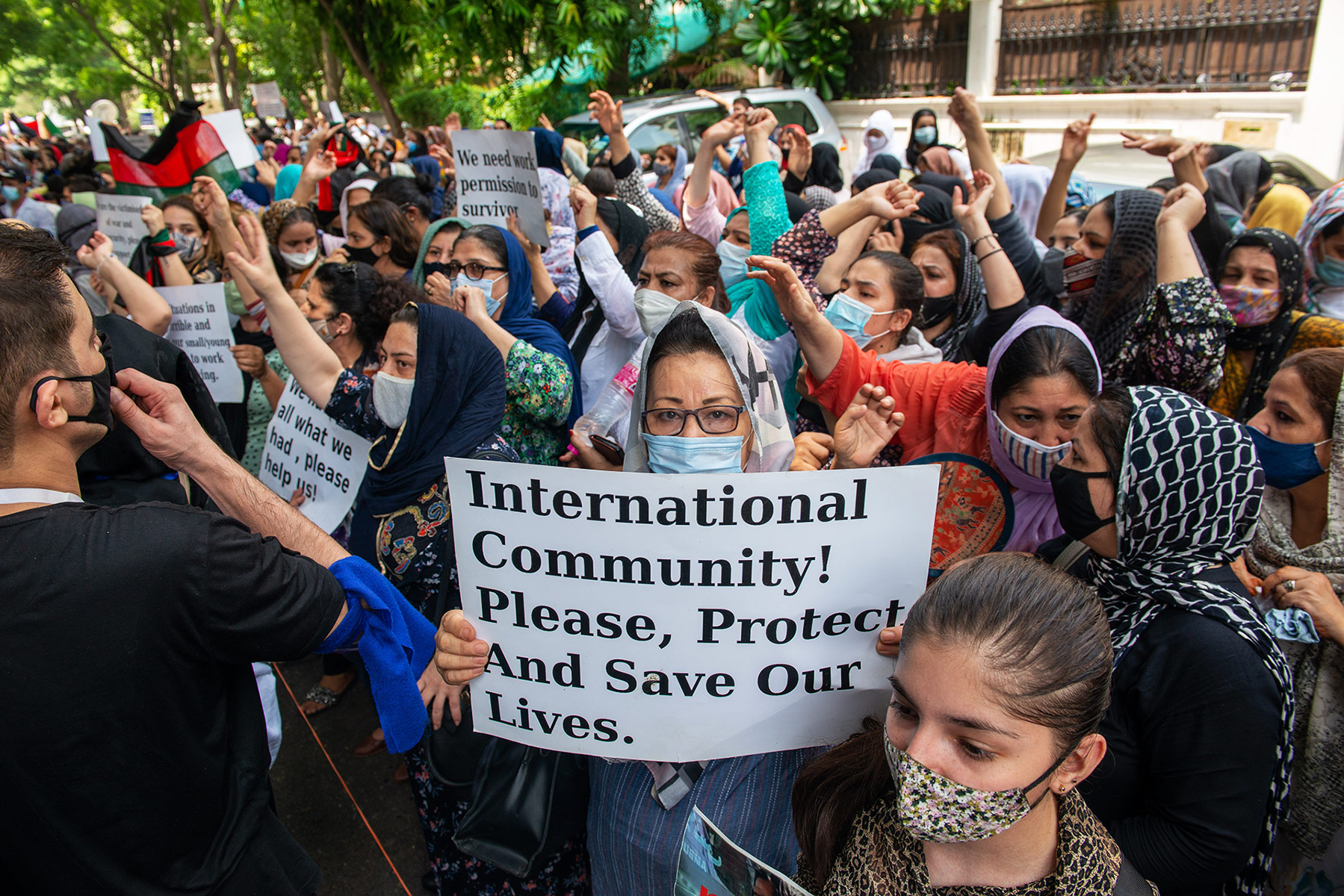 After the US withdrawal from Afghanistan, women’s rights in Afghanistan came under consistent attack by the Taliban, with many women activists captured, tortured, killed and reportedly raped. Unfortunately, the extent of these crimes is unknown due to a lack of comprehensive media coverage. However, the AFINT news channel reports that at least 200 people had been detained, tortured, raped and banned from traveling by the Taliban in the past six months. This number includes 102 women and 98 men, of whom 50 are journalists, 92 are civil activists, two are singers and 40 are prosecutors and judges in the previous government.

Over the past six months, Afghan women have continued to protest against the Taliban policies, provoking a brutal response. One of the detainees told AFINT: “Unfortunately, there is sexual harassment by the Taliban. The Taliban think that a woman who protests for her rights or has worked before they came to power is a prostitute. So, they consider these women as sex slaves.” While it may be impossible to change the Taliban’s mindset, international and regional pressure is key to helping Afghan women and holding the current regime accountable.

Since the overthrow of the Afghan government last August, the US remained engaged with the Taliban, although Washington does not recognize the regime as legitimate. Although the Taliban views the US as the loser in this conflict, many within the group’s leadership believe that they have to interact with Washington to gain recognition.

The Taliban’s Deputy Foreign Minister Sher Mohammad Abbas Stanikzai said in December: “If the US embassy reopens in Kabul, all European countries will be here in half an hour. We are working hard in this regard, and since I have been a member of the negotiating team with them (the Americans), I am sure from their morals and behavior that, God willing, they will be back soon.”

From the Taliban’s perspective, power is everything. As far as they can control the country, the US has to respect them and will have to recognize them. This assumption leads the group to not compromise on women’s rights. Instead of revising their policies, they detained women activists and then released some of them following pressure to do so during the Oslo talks in January.

The US has profound concerns about the Taliban’s relations with other terrorist groups such as al-Qaeda and the Islamic State branch in Afghanistan, but human rights, women’s rights and an inclusive government are all part of the US agenda in its interaction with the country’s new leadership. In his talk at the United States Institute of Peace, Thomas West, the US special representative for Afghanistan, emphasized these values as crucial for the US-Taliban relationship.

However, it is imperative to keep in mind that any compromise from the international community on women’s rights that suggests to the Taliban that their harsh policies may be accommodated will only exacerbate the situation for women in Afghanistan.

For more than 20 years, the US and international community repeated their strong commitment to supporting women in Afghanistan, creating the expectation that it should continue doing so after the Taliban takeover. However, many Afghan women saw the US agreement with the Taliban as a betrayal.

International pressure is the critical factor for holding the Taliban accountable. When the women activists disappeared without explanation, the Taliban denied its involvement for months. The United Nations and US diplomats repeatedly called on the Taliban to find the missing women.

In the end, the Taliban released several well-known women activists despite denying involvement in detaining them. The group also published videos of forced confessions by the activists. Totalitarian regimes use this tactic against human rights activities for propaganda and to mislead the public; exposing the Taliban’s double game will not be easy and will require international commitment and cooperation.

There are several measures that can be helpful in holding the Taliban accountable, and the US can play a central role. First, the diplomatic contacts with the Taliban should not be interpreted as hope for recognition; rather, diplomacy should be used only for contact and assessing responsibilities.

Second, international consensus on women’s rights and supporting the idea of an inclusive and legitimate government in Afghanistan is key. This is significant for women’s rights and negotiation for building a broad-based government to reflect Afghan society, which is instrumental for avoiding another round of conflict.

Third, increasing the activities of international organizations in Afghanistan to support women and monitor their situation under the Taliban is necessary. Currently, there is no access to different corners of the country where crimes against women may be committed. Fourth, financial support to organizations championing women’s education and activities will be vital for women’s voices and Afghan social society to resist the Taliban’s fascist approach.

The US can exert pressure on behalf of Afghan women to demand that their rights to work and education are honored. Any degree of leniency toward the Taliban will make the situation worse for women. If the US shows a faltering resolve or sends a misleading message, the international consensus on human rights will disappear.

Has Pakistan Made a Strategic Blunder By Backing The Taliban in Afghanistan?