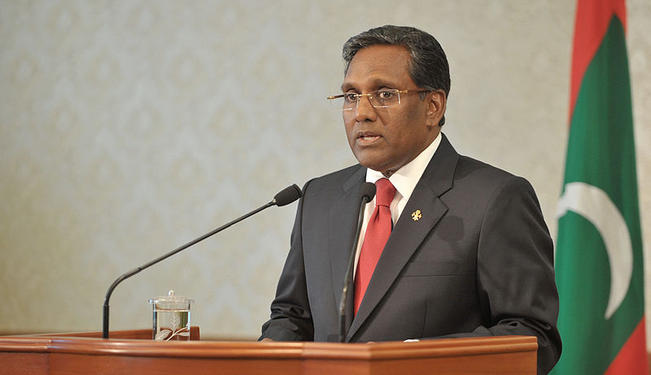 India is bearing witness to a tense political situation in the Maldive Islands. Its response may be vital in shaping the future of the Maldives and India’s relation with it.

The ongoing political crisis which erupted on February 7 in the small island nation of Maldives, led to the ouster of former President Mohamed Nasheed and the swearing-in of the Vice President Mohammed Waheed Hassan Manik. This upheaval is proving to be a complex challenge to India’s regional profile in the extended South Asian region.

Maldives comprises about 1200 scattered islands in the Indian Ocean and is located about 400km south-west of India, in the Lacadive Sea. Initially a Dutch protectorate in the 17thcentury, it later became a British island territory and finally achieved independence in 1965. Political stability was established by former President Maumoon Abdul Gayoom who ruled for three decades in a firm and autocratic manner. He was finally unseated by President Nasheed when the first free and fair democratic elections were held in 2008.

Acclaimed to be a liberal democrat who sought to bring about rapid changes in the socio-religious political structure of the 100% Islamic nation, in the last three years Mr. Nasheed created more opponents than he had imagined likely. The current situation results after a turbulent five days and this has added to India’s discomfiture. It was initially announced that in the face of growing opposition and protests to his rule, Mr. Nasheed had decided to hand over power to his Vice President Waheed Hassan Manik, as per the Constitution (Maldives has an executive Presidential form of governance, modeled after that of the US). A day later Mr. Nasheed claimed that he was forced to resign – at gun-point – and that hence this was a ‘coup’. In the intervening period, Delhi had already welcomed the transition to a new President. Violent clashes broke out between Nasheed’s supporters and his opponents.

In the last two days, Delhi has dispatched a special envoy to visit the island state and assuage the growing tension. Concurrently the UN and the USA have also sent their representatives, and as the head of the Commonwealth, the UK is conducting an investigation into the ouster of President Nasheed. Thus India’s primacy in the region is now being diluted and this is one of the many challenges that Delhi will have to contend with.

The prevailing political situation in the capital, Male, is tense: Mr. Nasheed has called for fresh elections while an interim government headed by the Speaker of the Majlis (Maldives’ main legislature) is in place. However the new President Waheed maintains that he is the man in charge now – as per the Constitution – and that he would seek to form a national government with the help of all the main political parties. In this regard, the role of former president Gayoom is critical – being no ally of Mr. Nasheed, he has welcomed the new Waheed government and denied that he had any role in the ousting of Nasheed.

What is being contested, political power apart – is the kind of socio-religious political model that will be adopted in the transition to participative democratic rule by a nation that is 100% Islamic. Here the small demography of Maldives (400,000) has some instructive lessons for other parts of the world that are similarly poised – from the ‘Arab Spring’ countries to parts of South and South-East Asia. Dependent on tourism and fishing in the main, Maldives is a relatively affluent South Asian nation with a GDP of $2bn and a per capita income of about $6,000.

The younger generation in Maldives – concentrated mainly in the capital Male and Addu (where the SAARC Summit was held in November 2011) are yearning for change and relate to the rhythms of modernity and the new ‘networked’ global community. However, the conservative religious elements who have been influenced by the events before and after 9/11 and by the spread of Islamic radicalism as derived from the extreme Sunni-Wahabi-Salafists, represent the opposition to Nasheed’s vision for Maldives.

The conservative Islamist faction in Maldives – which had been trained in seminaries in Pakistan and drew inspiration from the ideology of both the al-Qaeda and the Saudi-supported version of political Islam—shared a plank with the anti-Gayoom movement in the 1990’s and in many ways this was the Faustian bargain that Mr. Nasheed’s MDP (Maldivian Democratic Party ) made with the religious right, the Adaalath party, in order to form his government. Concurrently the many changes that the Nasheed regime sought to introduce were resisted by the old guard – the Gayoom protégés who had enjoyed unfettered power for 30 years.

The trigger for the current turbulence was an attempt by Mr. Nasheed to impose his will over the judiciary and other organs of a nascent democracy, which in turn were sympathetic to the religious right in certain cases related to radicalism and terrorism. The next few days will be fraught with uncertainty as Male seeks to find its own political accommodation. The presence of the UN and the US in the island nation may enable India to contribute to the speedy resolution of a complex regional issue whose implications are likely to be significant.

The Maldives has a very strategic geographical location in the Indian Ocean and so a stable, liberal democratic dispensation with strong ties to Delhi will be in India’s abiding interest. China and Pakistan have their own relevance in the calculus of Maldives and the exigency India does not need is a politically empowered and radicalized Islamic entity that may nurture ideologies and groups that are inimical to Indian interests. The last time this happened was in Afghanistan as a result of which India had to go through the ignominy of December 1999 – and the Kandahar hijacking episode.

The Indian neighborhood is going through a turbulent and contested transition to democracy – be it Nepal, Bangladesh, or now Maldives. Delhi must not be an over-bearing and insensitive big brother in the region. Rather, the run-up to the Nasheed ouster and the question of why Indian diplomats were unable to either anticipate or preempt the current impasse, merits detailed review by the political apex in Delhi. Could India have been more astutely pro-active and helped avoid the Maldives muddle ?

*[This article was originally published by South Asia Monitor on February 12, 2012].