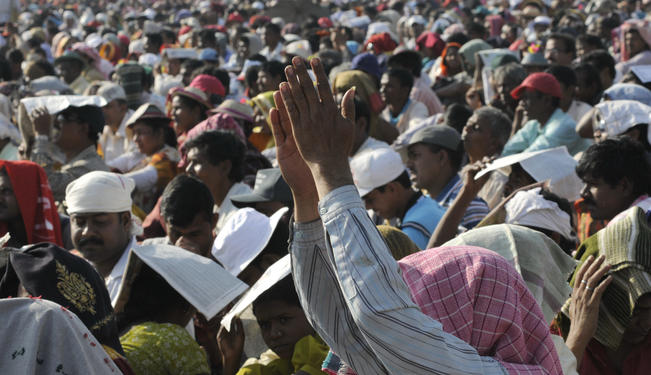 With the rise of Modi and the anti-corruption movement, the political winds are shifting in India.

The political arena is heating up in India as the next general election draws near. The performance of the current ruling coalition government, the Congress-led United Progressive Alliance (UPA), has been far below expectations. There is widespread disappointment with the Congress Party as reflected by numerous media surveys and recent state election results.

The Indian government has been struck with policy paralyses, indecisiveness, and numerous large-scale corruption charges. There is a general sense that the Congress Party has serious credibility issues and has lost touch with the people.

And the Lineup is…

There can be a fourth front led by the left parties and other regional ones who find it difficult to sit with either of the first three coalition groups; but this group is unlikely to have significant numbers as per the current trend.

Notably, the third front does not have a clear leader and projects a politically unstable formation. Also, the third front is highly unlikely to be in a position to form a government without support from Congress or the BJP.

Therefore, given Congress' dire state, theoretically, it should have been easy for the main opposition party, the BJP, to claim for a clear mandate in the upcoming elections.

All the BJP had to do was to find someone who projected three traits: clear policy-driven governance, decisiveness, and a non-corrupt image.

However, the BJP went ahead an extra-mile and projected Narendra Modi as its prime ministerial candidate, who not only projected those three traits but also brought in the baggage of the 2002 communal riots.

Though no court has found any direct role of Modi in the rioting, his opponents have targeted him for more than a decade now as he served as the chief minister during riots in which two-thirds of the victims were Muslims in a Hindu-majority state.

In addition, the BJP’s claim as a party of the incorruptible has limited takers, as many of its politicians have been charged in big corruption scandals. This created a political vacuum for a party with absolute anti-corruption and secular credentials. The Aam Aadmi Party (AAP), or the Common Man Party, is addressing this gap.

The AAP was formed last year by a group of anti-corruption activists led by Arvind Kejriwal. In its political debut, it triumphed and formed a government in Delhi. Though the party is in a nascent stage, it hopes to make the most of the political vacuum discussed above.

Both the Indian media and established political players hyperbolize and sensationalize the AAP’s positives and negatives. In Delhi, Congress has given outside support to the AAP; and is happy to shoot at the BJP from the AAP’s shoulder with election 2014 in sight.

While it is a real possibility that the AAP will cut down a few vital BJP seats, making government formation an uphill task for Modi, it poses a greater threat to Congress. Though the AAP consists of individuals with varied worldviews, its overall outlook seems center-left with elements of a direct democracy governance model.

Ideologically, there is little difference between the AAP and Congress. Apart from its legacy, Congress has little to offer what the AAP cannot. But the AAP can offer a non-corrupt, non-dynastic and non-nepotistic profile, while Congress cannot.

The AAP has already influenced the national political discourse. There is a clear swing in favor of anti-corruption and more transparency in governance. Many politicians across parties have adapted to austerity.

Nonetheless, the AAP has a long way to go before it actually challenges any of the established parties at the center.

Most importantly, it has to develop a party cadre at the grassroots level across the nation, and demonstrate acumen of governance and the ability to work with other parties. If it succeeds nationally, it will, at best, be able to challenge the BJP and substitute for Congress in the long-run. The BJP is primarily banking on the Modi wave. The AAP has certainly made things difficult, but Modi’s political acuteness is still unparalleled.

Modi’s words and actions set issues and agenda for national political debates. A fairly significant section of people, especially youth, consists of those who do not identify with the camp of religious hardliners and who cannot tolerate misgovernance, inefficiency and rampant corruption.

It seems that Modi has grasped this issue long back. For the past few years, he has been trying hard to reach out. He talks about governance, economy, technology, environment and developmental issues.

However, Modi's biggest challenge is to control his right-wing followers from ruining his efforts to accommodate potential voters who buy his governance and "India First" credentials. (Modi defines secularism as India First. It is a rhetoric, but the basic idea is that the policies should be in the interest of all Indians and not just certain sections of caste/religion.)

It is difficult to say if Modi’s right-wing hardliners are destroying his potential vote bank of liberal youth across religious lines, rather than consolidating his Hindu vote bank. Educated youth may find it difficult to sit in the same camp with religious hardliners, who tend to impose their world-view on others. It will be interesting to see how Modi performs this balancing-act in the future.

Only time will tell over whether the Indians create the BJP’s Modi wave, the AAP’s political revolution, or maintain Congress’ grand-old Nehru-Gandhi dynasty rule. We will have to wait, but not for long.