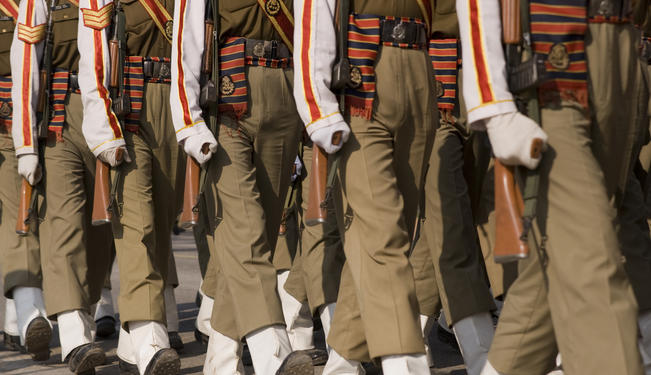 India must utilise its Special Forces in favour of the country’s strategic interests.

"What would explain our unwillingness to recognise the depth of these threats even today and take appropriate steps… Pakistan uses the instrument of terrorism against us but we think that we can bring this to an end through dialogue. We let Kashmiri separatists meet Pakistani leaders in Delhi and Islamabad… That we produced Chanakya almost 2400 years ago is not sufficient ground to claim that today’s India possesses a strategic culture."

"The instruments of State action have become dysfunctional. India’s strategic interests extend between the Suez to Shanghai… but we have neither the manpower nor the strategic thinking to handle these challenges."

Despite being continuously subjected to terrorism and proxy wars by both China and Pakistan, India is content with its archaic policy of using conventional force and dialogue to contend with belligerent neighbours. The advanced sub conventional capabilities of China and Pakistan versus the absence of the same in India, should be of serious concern to us — considering the strategic asymmetry this has created. With irregular forces having demonstrated greater strategic value over conventional and even nuclear forces in recent years, the fact is that sub conventional war is and will continue to be the order of the day. The Russia-Georgia war of 2005 is the last war to have been fought between two conventional militaries. The past decade has witnessed even the US and NATO battling irregular forces.

In the early 1960s, China advised Pakistan to create a militia to fight a prolonged war in India‘s backyard. These are the jihadis of today. As early as 1992-93, armed modules of Pakistani jihadis were identified as having pan-India reach in some ten Indian states over and above Jammu and Kashmir, and  had already established firm links with, and were undertaking joint training in, terrorist camps inside Bangladesh.

Pakistani terrorism and efforts to destabilise India requires no elaboration. With the private business-corporate-industrial complex of the Pakistani military pegged at US$20.7 billion in 2007, its stranglehold over Pakistan is unlikely to abate in a hurry. Already, Army Chief Kayani has cautioned Prime Minister Nawaz Sharif to go "slow" on potential friendship with India.  Ironically, despite the deaths of some 4,900 soldiers of the US-led coalition in Afghanistan, the majority of which were proxies from Pakistan, the Pakistani military continues to back US efforts to curb terrorism in the region.  It is not without reason that Ashley Tellis of the Carnegie Foundation says: "India being continuously subjected to terror actually suits many… India is a sponge that absorbs global terror”. Increased Taliban influence in post-2014 Afghanistan will automatically expand the Pakistani terror factory.

China spawned Maoist movements around the world, including in Nepal. It developed links with Al Qaeda and the Taliban a decade ago to negate support to Uighur separatists in Xinjiang. China provides tacit support to Pakistan’s anti-India jihad and has been arming and supporting insurgencies within India. China has been providing training, military advisors, and arms, including shoulder fired air defence missiles (QW-1 manpads) to the Taliban for fighting NATO forces. China had also supplied the QW-1 manpads to the Iraqi Shia militants.

As for India, China is not only supplying weapons to Indian Maoists but has also provided them with arms manufacturing capabilities. China has provided the United Liberation Front of Assam (ULFA) with training and arms, in addition to sanctuary on Chinese soil. Over the years, what China has been using against India are her multiple proxies: Pakistan; Pakistani proxies that include Al Qaeda and the Taliban, LeT, and Jud-Hum; Nepalese Maoists; and Kachen rebels of Myanmar. China provided arms manufacturing capabilities to the Kachens. Sophisticated arms and communication equipment are being pumped into India, particularly to Maoists and the PLA of Manipur. The next China-Pakistan collusive threat is under orchestration in the Maldives, a country which Al Qaeda and the LeT have already infiltrated.

China has been surreptitiously creating her deadliest proxy in the USWA (United State Wa Army) in Myanmar. The Wa Tribe is the brain and heart that controls the drug trade in the famed "Global Triangle", much like the Taliban did during their ten-year rule in Afghanistan.  Despite the close political, economic, and military relations between China and Myanmar, China had been steadily arming the USWA, which holds large tracts of territory under its control as "liberated" zones in north and east Myanmar — particularly in the Shan region. The obvious Chinese aim is to utilize the USWA as the trump card to keep Myanmar subservient. In addition to supplying the USWA with assault rifles, machine guns, rocket launchers, anti-tank weapons, shoulder fired QW-1 manpads, and armoured vehicles, China has now supplied them with Mi-17 helicopters armed with TY-90 air-to-air missiles, creating a proxy that will be even deadlier than the LTTE. India can ill afford to ignore the asymmetric war that China is waging in India’s heartland.

Irregular forces can hardly be deterred through conventional power, but India does not appear to acknowledge this. Operation "Parakaram", after the terrorist attack on the Indian Parliament, should have driven this point home. Other than during conventional war and routine missions performed with the United Nations, the only time India has deployed its Special Forces was as part of the Indian Peace Keeping Force in Sri Lanka. India has numerous Special Forces units, quantitatively on par with the US. But despite having to battle assymetric war over the past two decades, it has not developed and employed them for creating deterrence. The hesitation is perhaps because of the misconception that trans-border employment of Special Forces is limited to short distance, physical or direct actions. This misconception, coupled with the lack of a strategic culture and a military not fully integrated into strategic planning of military matters, continues to impair India’s politico-military leadership. The Special Forces should be central to asymmetric response. It must be understood that the application of Special Forces as a response to asymmetric war does not automatically lend itself to physical action. In fact, physical action should be the last resort.

Today, China and Pakistan are exploiting India's fault lines under cover of ambiguity and denial. India must do likewise. Special Forces are ideally suited to covertly control the fault lines of the adversaries. India must use its Special Forces for shaping the security environment in favour of the country’s strategic interests. Special Forces do not create resistance movements but rather advise, train, and assist resistance movements already in existence. Chinese strategy targets the political leadership of the adversary as the "centre of gravity". India's planning must be based on achieving strategic objectives through the application of modest resources, by focusing on the psychological element essential for political victories.

Special Forces provide a range of strategic low-cost options, in contrast to the limited and high-cost option of using conventional forces. Being a vital element of national power, they must be employed strategically on politico-military missions that are synchronized with national security objectives. Such tasks are mostly ordered directly by the highest political authority, generally without reference to even the military. There is an urgent need for India to develop publicised overt capabilities and deniable covert capabilities as deterrents against the irregular war thrust upon it. India must have the will to selectively demonstrate such capability, and hence ensure its credibility.  Dr. Marc Faber, author of Gloom, Boom and Doom, writes:

"India continues to be ambivalent about power; it has failed to develop a strategic agenda commensurate with its growing economic and military capabilities… throughout history, India has failed to master the creation, deployment and use of its military instruments in support of its national objectives."

In this era of sub conventional war, neglecting special operations will be at India’s peril. Indian media spouts debates about the Special Forces periodically after events like the Abbottabad raid to kill Osama bin Laden. But the fact is that as a nation, India has not gotten its act together to establish an effective deterrent against the proxy wars of China and Pakistan. India must create macro conditions for pro-active employment of Special Forces and promote a national vision. A lack of politico-military inertia requires redoubled efforts to help build political will. Ways need to be found to build public awareness and mould national opinion and decision-making. An integrated Special Forces set up with institutionalised support entrusted to professionals, must become a priority.