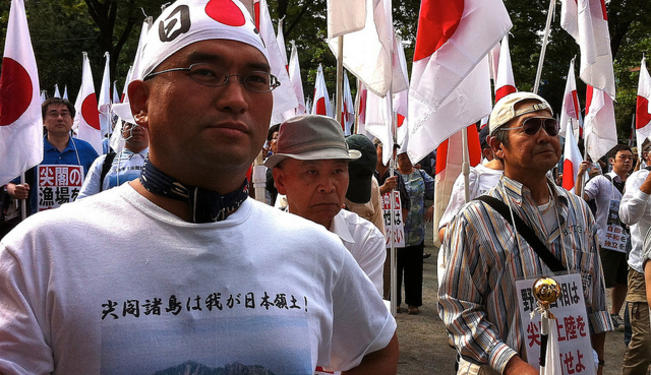 As disputes over the Diaoyu-Senkaku Islands persist both China and Japan face huge economic costs. The Chinese government is aware of the need to avoid violent backlash and further breakdown in economic ties with one of its biggest trading partners, but the situation lies in the hands of the general public.

During the recent outbreak of anti-Japanese sentiment throughout China, it has become increasingly clear that the costs for regional business and Sino-Japanese economic ties are rapidly rising. In the aftermath of Japan’s “purchase” of the Diaoyu-Senkaku Islands, protests and demonstrations have broken out across China, several of which have resulted in grave destruction  and denunciation of Japanese products and businesses.

While the political and nationalistic consequences of this situation remain central to regional harmony, the impact on China and Japan’s economic relationship should not be forgotten. Last year, two-way trade between China and Japan generated approximately US$345bn. According to statistics from Japanese customs authorities, in the first half of this year Japanese exports to China amounted to US$73.54bn, while imports from China were US$91.29bn. As China is Japan’s largest trade partner, the severity of soured relations cannot be understated.

A senior Chinese trade official has warned that the Japanese purchase of the Diaoyu-Senkaku Islands will “inevitably have a negative impact on China-Japan economic and trade ties.” A stable political environment is a predominant prerequisite for productive economic trade. If tensions in the East China Sea over the ownership of the Diaoyu-Senkaku Islands persist, regional business ties are predicted to suffer.

In the past several weeks, numerous Japanese businesses and factories have closed down, with their owners expressing concern about dangerous anti-Japanese sentiment. Protests throughout China have seen the destruction of Japanese-made products and the looting of Japanese restaurants and shops. Most troubling for regional business ties; anti-Japanese demonstrations have also resulted in the denunciation of Japanese-owned factories, and the besiegement of the Japanese embassy.

Edwin Merner, president of the Atlantis Investment Research Corporation in Tokyo, noted “if things continue to deteriorate, a possibility, the damage could become serious, recovery might take a year or more, trade could contract.”

Many well-known Japanese corporations operating in China were closed down recently, including:

– Toyota Motor Corp.: Arsonists damaged their stores in Qingdao, however, the total number of closed factories has not yet been revealed. Their Chinese sales account for 10% of global revenue. Toyota has now stated that they may scale down their expansion plans in China.

– Honda Motor Co.: Arsonists damaged their stores in Qingdao, forcing them to close all of their factories intermittently. Chinese sales account for one-fifth of their global revenue.

– Nissan Motor Co.: Reported damage to its dealerships in Qingdao and have halted production in two of their factories. Chinese sales account for over one-quarter of their global revenue.

– Panasonic: Productions in a Qingdao factory were halted following sabotage by local workers. The company also closed plants in Suzhou and Zhuhai.

– Canon Inc.: Suspended three of its four main plants recently, including a laser printer and digital camera factory in Guangdong, and a copier plant in Jiangsu.

Many Japanese firms are now questioning whether further expansion into China is viable, with some considering completely pulling out of the country and shifting operations elsewhere. A recent poll by Reuters reveals that around 41 percent of Japanese firms believe that anti-Japanese sentiment in China will negatively impact their business plans.

“We are trying to forecast things in advance and preparing as much as possible to avoid any impact on our business,” said Takanobu Ito, Honda’s chief executive.

Also worrying for regional business ties is the threat of Chinese sanctions against Japan. It has been suggested by the Chinese Academy of International Trade, which is a branch of the Commerce Ministry, that China should impose sanctions on Japan’s bonds market unless they reverse their decision to nationalize the Diaoyu-Senkaku Islands. As China is Japan’s biggest creditor, any bond sanctions will likely create a massive fiscal crisis for Japan.

Japan is aware of the diplomatic and economic pressure that China is able to exert to its advantage. China’s People’s Daily newspaper, which is the mouthpiece of the Communist Party, affirmed, “Japan’s economy lacks immunity to Chinese economic measures.” Jin Baisong from the Chinese Academy of International Trade further stated “it’s clear that China can deal a heavy blow to the Japanese economy without hurting itself too much.” He further emphasized that Japan relies on Chinese demand to keep its economy afloat, a fact that China could leverage.

However, both China and Japan are increasingly concerned about the economic repercussions of violent protests and demonstrations. An editorial in China’s state-owned Global Times argued that violent protest is never the appropriate solution. It should also be remembered that Japan is China’s fourth largest trade partner. Any harm to Japanese business and investment would in turn harm China’s economic interests, something that it cannot afford to happen in the light of its current slowdown.

The People’s Daily has also wisely noted the interdependency that exists between China and Japan, stating that any sanctions against Japan would be a “double-edged sword” for China.

Japan has also highlighted the importance of Sino-Japanese bilateral economic ties, with Chief Cabinet Secretary Osamu Fujimura stating “Japanese companies play an important role in the Chinese economy and employment. We believe we should be calm and make rational judgments from a broad perspective.”

In the long-term, it is in neither country’s interests to remain entrenched in a territorial dispute that does not result in reciprocal economic advantages. The promotion of friendly political and economic relations must be stressed to ensure that regional business ties remain robust. Certainly, previous territorial disputes between China and Japan have been resolved with few economic consequences. However, if disputes continue to arise, regional trust and goodwill will decline, and may result in a hardening of China’s anti-Japanese sentiments.

This article was originally published by 2point6billion.com, September 22, 2012