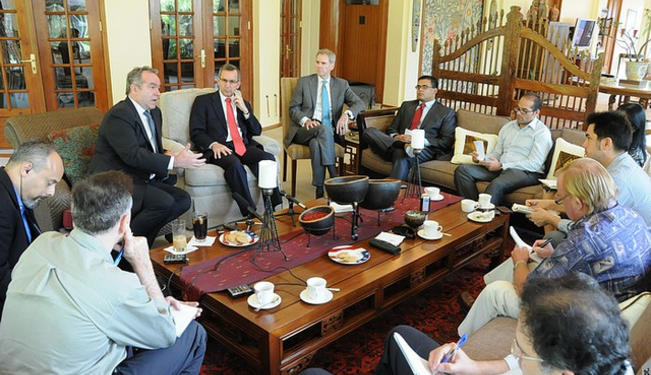 The participation of the United States and Russia in the recent East Asia Summit in Bali is threatening to overshadow the efforts by ASEAN Plus Three to be the primary platform for regional integration. Can ASEAN still realise an East Asia Community?

The East Asia Summit in Bali on 19 November 2011, attended for the first time by the leaders of the United States and Russia, stole the limelight from ASEAN’s other major summits held in parallel with its Dialogue partners, such as the ASEAN Plus Three and the ASEAN Plus One respectively with China, Japan, South Korea, and the US.

The East Asia Summit, or EAS, was a game changer for regional cooperation in more ways than one. It brought together all the major powers in the Asia-Pacific region, including for the first time, Russia and America. Their presence balanced the Asian giants, China, and India, if not actually overshadowing them. American leaders have highlighted the US as a Pacific power with interests in the East Asian region. This posture has given a security orientation to US participation in the EAS, raising concerns that it could rekindle big power rivalry in a new great game in East Asia. Asian countries, however, have a more nuanced perspective of the emerging regional architecture.

The enlarged EAS has dilated the prospective East Asia Community that was envisioned for the ASEAN Plus Three (China, Japan, and Korea) since it was initiated by ASEAN a decade ago. Instead Australia would claim that the EAS practically realises its vision of an Asia-Pacific Community (APC). However, the two groupings (ASEAN Plus Three and EAS) are neither mutually exclusive nor complementary. Despite having overlapping membership the groupings have different structures, objectives, and functions.

The ASEAN Plus Three provides a framework for cooperation between the ASEAN members and the Northeast Asian partners, China, Japan, and South Korea. The Plus Three countries provide the technical and developmental assistance to the less developed ASEAN members and seek to increase trade and economic exchanges between them for mutual growth and prosperity, bilaterally or regionally, through freer trade. The three Northeast Asian states have bilateral free trade arrangements with ASEAN and are pursuing proposals for an East Asia Free Trade Area (EAFTA) and Comprehensive Economic Partnership in East Asia (CEPEA).

The centrality of ASEAN as the driving force in the evolving regional architecture and the key role of the ASEAN Plus Three process in achieving the long-term goal of an East Asia Community were reaffirmed by the ASEAN Plus Three Summit in Bali. They acknowledged the EAS would also play a significant role in the regional community building process.

Japan and ASEAN jointly declared their commitment to intensifying regional cooperation in East Asia and building a regional architecture that was open and inclusive. Japan reaffirmed its continued support for ASEAN centrality in the evolving regional architecture including ASEAN Plus Three, EAS, the ASEAN Regional Forum (ARF), and the ASEAN Defence Ministers Meeting Plus (ADMM Plus).

Likewise South Korea and ASEAN struck a Strategic Partnership for Peace and Prosperity in 2010 and jointly supported ASEAN integration to realise an ASEAN Community by 2015 that would contribute to the building of an East Asia Community.

Chinese officials described the ASEAN Plus Three grouping as the most dynamic and effective process for East Asian integration. They viewed it as part of the evolving regional architecture that is wide-ranging and comprehensive, covering political, security, economic, and people-to-people relations. The breadth and scope of the regional architecture included the ASEAN Plus One, ASEAN Plus Three, ASEAN Plus Eight (or East Asia Summit), ADMM Plus, ARF, the Asia Pacific Economic Cooperation (APEC) forum, and even the Trans Pacific Partnership (TPP). As mutually complementary processes, they all contribute to the ultimate goal of an East Asia Community.

China openly supported ASEAN’s centrality in the emerging regional architecture and the East Asia Community for which it viewed the ASEAN Plus Three as the main vehicle. It described the EAC as being characterised by diversity, openness, inclusiveness, dialogue, and consensus, focusing on the priority areas of economy, trade, and food and energy security.

China saw the EAS as reaffirming the same principles and welcomed the US and Russia into the EAS. It believed the enlarged EAS would make a greater contribution to East Asia and beyond, as it was a leaders-led forum, dedicated to discussing regional and international issues to give strategic guidance.

However, being leaders-led and meeting just once a year, the EAS may be less involved in functional and economic cooperation among its members. The EAS serves as the top layer of a multi-layered regional framework for consultation and cooperation.

There is no path set out for the EAS to become an East Asia Community as envisaged by the ASEAN Plus Three. Equally, the TPP that is being promoted by four small countries and joined by five others including the US, is not likely to replace APEC or CEPEA. However it could form another lattice of free trade agreements to buttress the FTAs already concluded among the East Asian states and with the US.

This would suggest that the proposed East Asia Community will be less a security-oriented framework and more an economic-oriented grouping, which would pose no security risk to anybody in the Asia-Pacific. By implication, the security-oriented alliances and organisations for security cooperation will be superseded by a wider network of economic, political and socio-cultural platforms which form the framework of the new regional architecture, in which ASEAN will have a central role.