Thailand will never be a fully democratic country as long as the military continues to intervene in politics.

Although Thailand will officially hold its first general election in five years on March 24, 2019, the notion that the country will become fully democratic as a result is naive at best and dangerous at worst. The fact is that after the election, Thailand will remain just as undemocratic and most likely governed by an undemocratic administration that has seized and held onto power through undemocratic means. It is absolutely imperative that the international community is aware of this and continues to apply pressure on the Thai government to undergo genuine democratic reforms.

The current leader, General Prayuth Gen-o-cha, became prime minister of Thailand in May 2014 after engineering a coup following months of street protests against the government of Yingluck Shinawatra. It was Thailand’s 12th coup d’état since the abolishment of absolute monarchy in 1932. Since then, General Prayuth has ruled with an iron grip through essentially unlimited powers that he has granted himself in the 2014 interim constitution. He has arrested hundreds who have dared to criticize the junta and has gone out of his way to stifle both online and offline political discourse.

The upcoming general election in March is almost certainly not going to change the status quo, as General Prayuth is effectively locked in to retain his premiership, courtesy of shrewd electoral and parliamentary engineering. The deliberately designed mechanism of this election ensures the entrenchment and the prolonging of military rule for many years to come.

From the beginning, it was clear that the military government was going to play a major part in the election. After writing the interim charter in 2014, the military government formed the committee to draft a new permanent constitution, which included provisions heavily favorable to itself  before organizing a sham referendum to approve the constitution in 2016. The government essentially outlawed opposition campaigning and arrested over 100 people for campaigning against the draft. Furthermore, the referendum used heavily leading questions to sway voters.

The government’s rubber-stamp parliament then passed the laws governing the selection of senators and the election of MP’s with very little public participation. Through these laws, the constitution and other arbitrary orders, the government has meticulously shaped the rules of engagement well before the first ballots are cast. It has also shamelessly departed from several long-held democratic norms that ensure a peaceful transition of power. And these are just the methods that are known, with surely countless more hidden from the public eye.

Thailand’s Constitution allows the National Council for Peace and Order (NCPO) — the current government — handpick all 250 senators for the next parliament. Crucially, these appointed senators will join the 500 elected MPs in choosing the next prime minister. This means that General Prayuth may only need the votes from 126 MPs to go along with the 250 senators that the NCPO selected in order to hold onto power. Yes, the next election can result in a government that controls just over a quarter of the seats in the house of representatives. Other prime ministerial candidates, meanwhile, will most likely need 376 votes from MPs — a herculean task given the new electoral rules that disfavor large existing parties.

The constitution also conveniently allows the hand-picked senators to stay in power for five years. This means that they can take part in selecting the prime minister for the next two election cycles, thus giving General Prayuth a potential of eight more years at the helm — a total of 13 years in charge. This would make Prayuth the longest serving prime minister since Plaek Phibunsongkhram in the 1950s.

As mentioned earlier, the new electoral system largely disfavors large existing parties. It has been expertly designed in such a way that will dilute the votes for the larger parties by also taking into account the votes for candidates who do not win their district elections. Such electoral engineering ensures that it is highly unlikely that any party will win enough seats on its own to choose a prime minister without the votes from the senators who are almost certainly going to support General Prayuth.

Moreover, new election laws also indicate that the prime minister does not need to be an MP. This then clears the way for a majority in parliament to appoint General Prayuth to be the next head of state without him needing to campaign for any votes himself or represent any constituency. This is a remarkable step away from the traditional principles of parliamentary politics where the prime minister is usually also an MP in the lower house.

Furthermore, the new electoral rules also allow for candidates of the same political party to have different numbers for each district. This again is unprecedented in recent Thai politics and will cause great confusion among voters. It is likely a deliberate attempt to dilute the importance of existing political parties.

Through the junta’s ban on political activities, political parties not affiliated with the military government have faced paralyzing obstacles and restrictions to all their activities, including, but not limited to, making speeches, holding rallies, raising funds, announcing their policies and even holding party meetings. These restrictions have been partially lifted in December. On the other hand, the government has been de facto campaigning across the country in recent months through so-called mobile cabinet trips as well as announcing a swathe of populist policies and handouts it has criticized politicians for.

In addition to a myriad of restrictions on political parties, the government has also held off on announcing the new election districts and election date until just a few months before the event. This has given political parties a very difficult task of preparing in time for such a consequential election, while the government and its affiliated parties have been busy campaigning for months ahead.

It is widely reported that the government resorted to bribery and extrajudicial legal remedies to “poach” over 80 former MPs and high-profile national and local politicians to Phalang Pracharat Party (“Phalang” means power while “Pracharat” is the name of the junta’s development policy which emphasizes the collaboration between the state and the people but is effectively just a platitude), the new pro-military bloc seen as a vehicle for General Prayuth to prolong his power. Such methods to attract high-profile politicians are legally questionable and can have massive implications for the outcome of the upcoming elections. Many of these “poached” politicians face pending corruption investigations and, curiously, many of these probes have been mysteriously dropped after the politicians declared their support for Phalang Pracharat.

The new districts that have been redrawn by the election commission in November 2018 are highly contentious. Many of the new districts did not undergo public hearings and have very unusual shapes and alterations from the previously-drawn districts. Such blatant gerrymandering seems to favor many candidates in the military-backed Phalang Pracharath. There is ample evidence that the government has intervened in the redrawing of these electoral maps.

In yet another stark departure from democratic parliamentary norms, the military government has steadfastly refused to dissolve parliament and install a caretaker government in the run-up to the general election. This has previously been done in order to ensure a level playing field by limiting the government’s powers during the campaign season. Citing powers granted to him by the constitution, General Prayuth has also ruled out ending the use of his absolute executive power, granted to him after the 2014 coup d’état. Hence, his government can use this power to curry favors to voters and gain an unfair advantage over other parties. In fact, he has already done that through various populist policies as previously mentioned.

Now, some people who have read up to this point may accuse this author of being a supporter of Thaksin and Yingluck Shinawatra, the two former prime ministers who were dethroned by military coups in 2006 and 2014 respectively. However, that is not the case — supporting the Shinawatras would mean condoning a dictatorial style of leadership, mired in conflicts of interest and rampant corruption. But having elected unscrupulous politicians in the past does not give us the green light to now turn to dictatorship. We must strive toward democracy, even if times are as testing as ever.

Upon the conclusion of the upcoming elections, Thailand will transition from a military state to a flimsy, military-guided quasi-democracy. Thailand will never be a fully democratic country as long as the military continues to intervene in politics. Recent reports of countries preparing to normalize relations with post-election Thailand are a serious worry. The onus is of course on Thais to protect our democracy, but we need the help of our international friends. 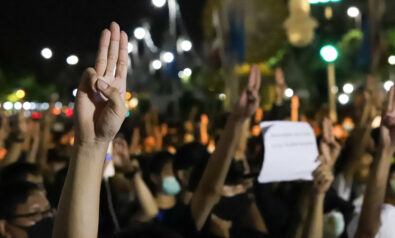 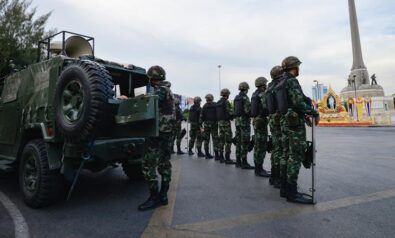 Understanding the Thai Military and Security