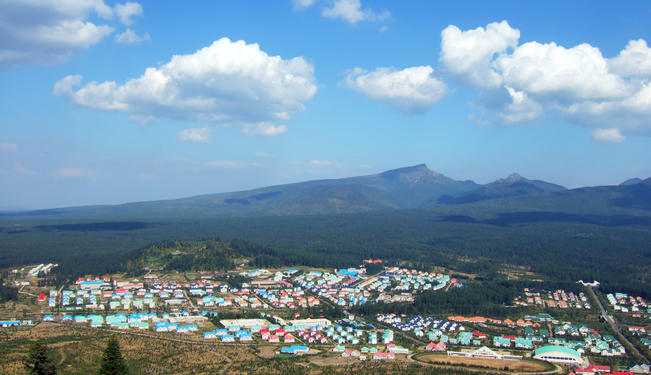 In North Korea, the threat of desertification should be raised to the same level as nuclear nonproliferation.

There is a terrible danger lurking just over the DMZ that threatens the Republic of Korea and Northeast Asia. This threat demands an immediate response that is focused and forceful, as well as a long-term strategy that will bring together all members of the international community for a campaign dedicated to the permanent containment of this threat.

It is not North Korea’s Taepodong ICBM systems, nor its Musudan or Nodong missiles that I have in mind. Nor do I refer to the nuclear weapons that were recently tested as part of Pyongyang’s high-stakes diplomatic cat-and-mouse game with the international community. Although the danger of an arms race in Northeast Asia is serious, humanity faces another, potentially more devastating peril — one for which we have yet to begin to make required strategic preparations.

I refer to the spread of deserts and semi-desert regions in North Korea as a result of the reckless logging of forests, the misuse of soil, and irresponsible farming practices. These ecological dead zones, where few plants can survive, are spreading. As desertification worsens, this ecological nightmare will have serious, perhaps irreversible, repercussions in South Korea and throughout the region.

Professor Kim Seoung-il of Seoul National University estimates that over 1 million hectares of forests in North Korea have been lost over the last 20 years, leading to a nearly irreversible loss of soil and an endless series of floods and droughts.

This crisis in North Korea is only a more extreme manifestation of widespread trends in Asia, a region that is losing land to deserts more rapidly than Africa. At present, almost 500,000 hectares of land are lost to deserts annually in the region, and at least 2.62 million hectares, accounting for 27 percent of the total landmass of China, has been irretrievably lost to deserts. Already, yellow dust carried by the wind to Seoul, and even to regions of Japan, from the spreading deserts of Northeast China has emerged as a serious ecological and health threat.

The loss of soil in North Korea cannot be stopped by B-2 bombers or missile defense systems. In contrast to military threats, these new environmental dangers demand not the isolation of North Korea but direct, long-term international engagement, partnership, and cooperation. The international community must work closely with the citizens, organizations, and government of North Korea to address this threat and must readily lend expertise and support. The world cannot walk away and leave North Korea to continue its destructive practices.

Needless to say, the destabilization of ecosystems from desertification knows no national borders. International distaste for the government in Pyongyang should not blind us to our common interest in combating the spreading deserts in East Asia. Training North Koreans in how to respond to the threat of climate change through effective environmental policies should be our highest priority where North Korea is concerned.

North Korea, as well as much of China and Mongolia, currently lacks the technical expertise to address the problems of deforestation on the ground. In many cases, local farmers have been forced to cut down trees just to keep themselves warm or generate some much-needed income. The developed world must make a strong commitment to addressing these issues through the supply of expertise, resources and, most importantly, through a profound modification of its own consumption culture.

These habits of consumption, whether in Seoul or in New York, ultimately drive this global desertification wave. As more and more people in developing nations rush to enjoy the indulgent lifestyle dangled before their eyes in the media — and in this, North Korea is no exception — the resulting overgrazing, stripping of forests, and disregard for topsoil will increase.

Going forward, the United Nations Convention to Combat Desertification should play a central role in future Six Party Talks. And on the American side, the threat of desertification should be raised to the same level as nonproliferation for government officials in the United States. Washington needs to reconfigure entirely its response to the North Korean threat in light of the spread of deserts in North Korea, Mongolia, and China.

The time has come to look with clear eyes at the true threats in the region and understand at last that the Cold War has come to a close. The damage to Korea’s ecosystem done today will last far beyond any political reunification of the peninsula. President Barack Obama’s recent pledge to address deforestation globally and to work together with China to address environmental issues is a promising start. Perhaps both initiatives can be tied to the North Korean problem.

*[Note: Emanuel Pastreich is the director of the Asia Institute in Seoul. This article was originally published by Foreign Policy in Focus.]