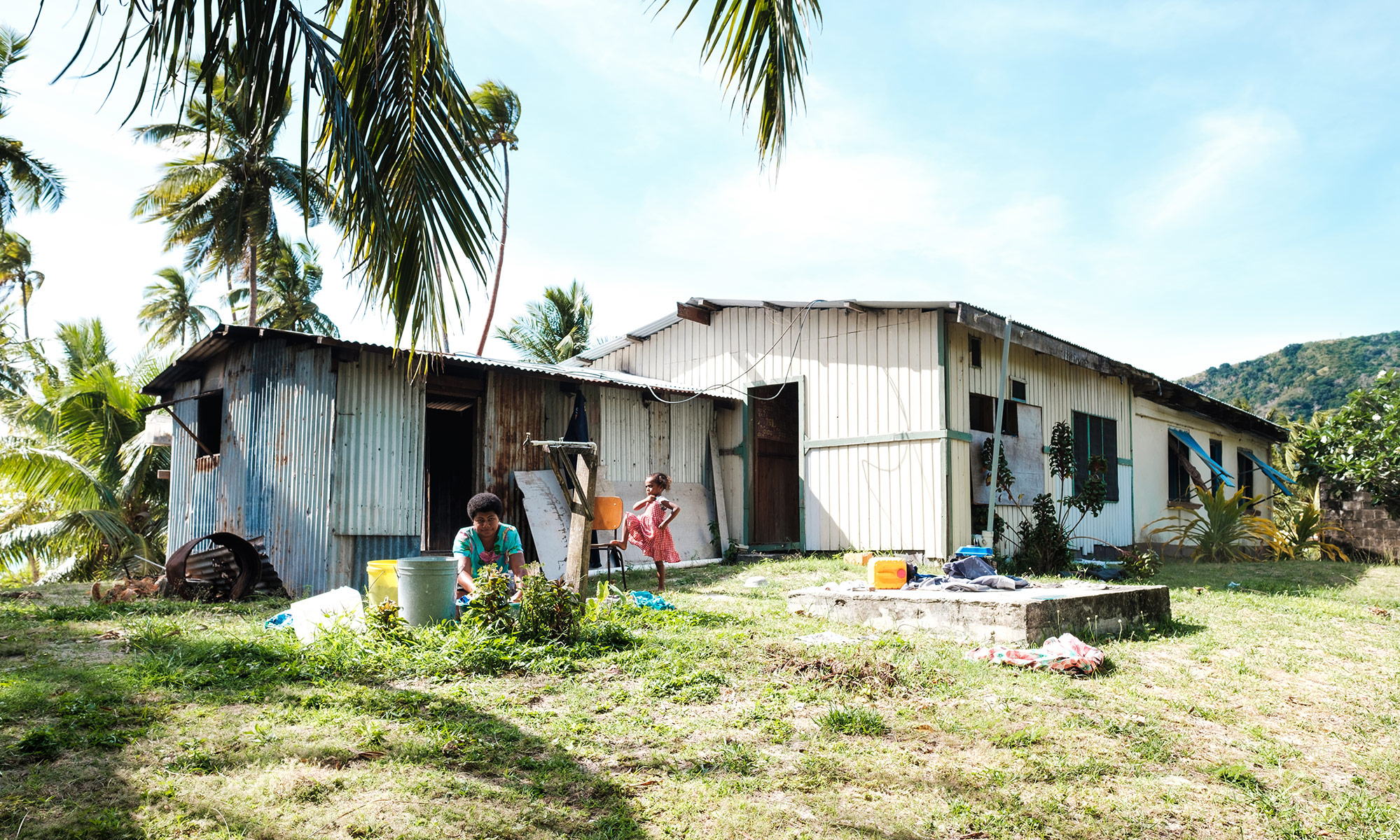 On November 6, Brianna Fruean and other Pacific Islands representatives marched in Glasgow as all eyes are on the United Kingdom for the COP26 climate change summit happening this month. The chilly streets of Scotland and its winter are so far removed from the reality of the Pacific that we, in the Southern Hemisphere, can neither fathom nor imagine the cold. Unfortunately, the discussions at COP26 are similarly removed from the climate realities faced by Fijian women.

The impacts of climate change are no longer just an environmental or political issue but also a complex social problem with immense repercussions for the well-being of women, girls and marginalized groups who already face injustices due to gendered power dynamics and a lack of control over the use of resources. Studies have found that women and girls are 14 times more likely to die or be injured than men due to a natural disaster. They are subject to a number of secondary impacts, including gender-based violence, loss of economic opportunities and increased workloads.

Not only are women more affected by climate change than men, but they also play a crucial role in climate change adaptation and mitigation. Women have the knowledge and understanding of what is needed to adapt to changing environmental conditions and to come up with practical solutions.

But their knowledge and expertise are still largely untapped resources. Restricted land rights, lack of access to financial resources, training and technology, as well as limited access to political decision-making, often prevent them from playing a full role in building resilience in the face of climate change and other environmental challenges.

Wealthier nations, which have often used colonialism, territorialism and capitalism as means of defining progress, have caused irreversible damage to the environment, largely contributing to the deterioration of climate worldwide. Today, the Pacific Islands may be a group of nations most vulnerable to the effects of climate change, with some facing possible obliteration.

In 2021, as the fear and uncertainty of the COVID-19 pandemic seemed to be the biggest immediate threat facing the global community, the Pacific region was not spared from catastrophic climatic events. The year began with tropical cyclone Zazu affecting American Samoa, Samoa, Niue and Tonga, and tropical cyclone Yasa landing in Fiji and Vanuatu within the span of a week.

The Pacific is most definitely experiencing more frequent and intense cyclones than ever recorded. For example, Yasa became the most powerful tropical cyclone of 2020, beating Goni with a minimum barometric pressure of 899 mb (26.55 inHg) and a maximum wind speed of 250 km per hour (155 mph). It was also the fourth most intense South Pacific tropical cyclone after Winston (2016), Zoe (2003) and Pam (2015), while Zazu dissipated into an extratropical cyclone.

With this trend of disaster in the region, the need for resource allocation is great. In 2018, Global Humanitarian Overview shows that $23.17 billion in funding was received in worldwide appeals. According to the Lowy Institute’s Pacific Aid Map, $132.11 million was committed to the Pacific in humanitarian aid that year, a mere fraction of the global effort. The Pacific’s biggest bilateral partners continue to be Australia and New Zealand.

The United Kingdom’s pledge of £290 million to help countries prepare for climate change is welcome. However, past pledges by wealthier industrialized regions have failed us. For example, the commitment to raise $1 billion in climate funding has not happened and continues to be discussed at COP26. These resources are crucial for the countries and people most vulnerable to climate change.

The lived realities of women in the communities are often silenced given the limited representation women have in decision-making. The stories we do not hear are of those most impacted by climate change, stories that affect the livelihood and well-being of communities. At the Women’s Fund Fiji, our goal is to shift the power imbalances that prevent the full participation of women, girls and marginalized groups by providing equitable and flexible access to resources that will help women’s and feminist groups, networks and organizations better respond and adapt to the climate crisis.

The women in the rural remote communities of Fiji are among the most vulnerable groups of people battling climate change in the world. Women in Namuaimada Village in Rakiraki specialize in harvesting nama (Caulerpa racemosa) — an edible seaweed, also known as sea grapes, which is found in shallow waters near the reef. The harvesting of nama is done mainly by women, who go out in fishing boats to the reefs during low tide and spend about four hours harvesting the seaweed.

According to the Women in Fisheries Network report funded by Oxfam and the Women’s Fund, women are expert fishers in the coastal zone and the dominant sellers of seaweed, crustaceans and mollusks, with many fishing for household needs and selling the surplus contributing to the income and livelihoods of their families. With rising ocean temperatures, the production of these onshore and coastal marine resources will continue to decline, eventually causing loss of income and increased food insecurity for the fisherwomen.

The assumption that only the livelihoods of coastal women are affected is debunked as we investigate the plight of the fund’s grantee partner, Naitasiri Women in Dairy Group, who are already experiencing the onset of climate change and exacerbated natural disasters creating both short-term and long-term hurdles to their work. The group of 31 women dairy farmers located in the interior of Fiji’s main island of Viti Levu run family-owned dairy farmsteads and are shifting social norms like patriarchy and contributing to decision-making epicenters in a male-dominated industry.

Floods and tropical cyclones have continually disrupted their farm infrastructure and their ability to supply milk to the Fiji Dairy Cooperatives Limited, the nation’s main dairy organization that purchases their milk on a contractual basis. With temperatures expected to continue to rise, their cattle will face greater heat stress. In hotter conditions, lactating cows feed less, leading to a fall in milk production. If climate change continues along the current trajectory, these women will be faced with income reduction and may not be able to support their families or maintain their current independence.

This is the unfortunate reality faced by women of Fiji specifically and women of the Pacific at large. Under the guise of the technical and scientific study of climate change and climate-induced disasters, the voices of women in all their diversity are often not heard. Our experiences of the many challenges we face as a group of the population that is most vulnerable are not necessarily accounted for when decisions relating to climate change are made.

This year, leaders of just three of the 14 Pacific Island states made it to the discussions to Glasgow due to COVID-19 restrictions, making it “the thinnest representation of Pacific islands at a COP ever,” according to Satyendra Prasad, Fiji’s ambassador to the United Nations. Given that international negotiations are still, in the words of Britain’s former Energy Minister Claire O’Neill, very much a “blokes’ space,” women’s groups are left to bear the brunt of shrinking spaces and resources when it comes to mitigating the challenges of the climate crisis in the Pacific.