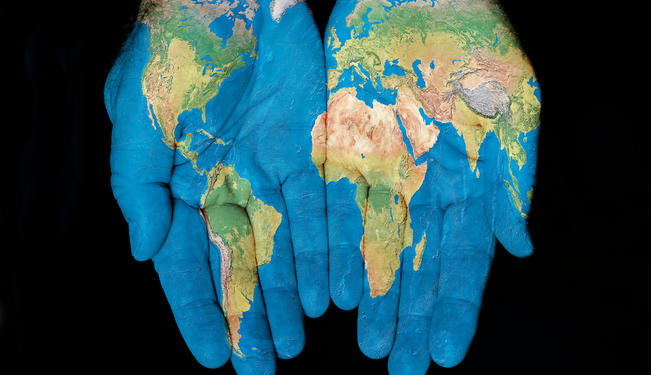 Ten years from now Africa might be the only remaining developing region in the global race for economic growth. Amy Calfas goes in-depth in her winning essay for Fletcher School's “Africa's Turn?” conference (for background information see here).

Few scholars have envisioned a day in which African security and economic prosperity were no longer dependent on a constant flow of blue helmets and aid packages. While exceptionally belated, the day has finally arrived in which African private investment has finally surpassed aid exchanges. Today, it is impossible to ignore the continent’s newly radiant economic complexion, and more astoundingly so when one considers the obstacles that hindered the African economy from solidifying its hold on the international marketplace in the first place: a global recession, donor budget cuts, and the adverse affects of climate change to name a few.

Just ten years ago, I had the pleasure of assisting the planning team for the 2012 US-Africa Business Conference, the United States State Department’s highest-level event with sub-Saharan Africa. An extension of the Africa Growth and Opportunity Act (AGOA), the forum hosted six hundred participants, including top US and African government officials, private sector leaders, and civil society representatives, and strived to expand physical infrastructure to make Africa “ready for trade.” At the time, investors clearly recognized that the continent was on the precipice of change, but it was also painstakingly clear that Africa had a long way to go. Ghana, one of the continent’s key economic powerhouses, was investing in its green energy portfolio, particularly its solar capabilities. Meanwhile, Zambian officials sought investors to finance their endeavor to turn the Lusaka airport into a dynamic regional hub with the ultimate aim of maximizing regional integration. The resolve for change was tangible.

Over the course of the subsequent decade, Africa did what nobody thought was possible. While the rest of the global economy cowered during the recession, Africa remained the only developing region that demonstrated a dramatic increase in economic growth, trade, and foreign direct investment. What is perhaps even more impressive is the fact that it maintained a steady growth trajectory even after its major donors experienced serious budget cuts, at which point it was steadily forced to expand grassroots business networks to replace the neo-colonial aid structures on which it had once been dependent.

Now home to the world’s fastest growing economies, Africa boasts the global economy’s highest foreign investment rates. Its path to success, however, is incredibly unique when compared to growth periods of other developing regions such as Latin America or Asia. Essentially, the continent has leapfrogged past periods of industry development that most budding industrial economies impatiently withstood, instead free riding off of pre-existing technologies and adapting them for its own unique needs.

Take its telecom technologies, such as its mobile agriculture apps and mobile banking programs. Kenya’s M-Pesa mobile banking program, an exemplary model of Africa’s expanding communications infrastructure, now hosts millions of cell phones. The mobile banking trend also thrives in Somalia, once considered a failed state, as it has begun to realize the liquidity of its highly developed banking and finance systems. Mobile apps are now employed for everything from conflict mapping to the regulation of local agricultural production. Likewise, communications infrastructure financiers have invested in powerful undersea fiber-optic cables from Durban to Accra, which have brought Internet capabilities to even the most rural communities. By providing a sense of autonomy to previously unconnected youth, the proliferation of new technology systems has electrified a new generation of entrepreneurs by endowing them with the tools necessary to interact within the globalized realm.

The rise of a new class of motivated young elites and female entrepreneurs is another extraordinary African phenomenon. Small businesses have exploded and markets have gained liquidity, contributing to the doubling of discretionary income and consumer spending and a remarkable entrepreneurial boom. Most importantly, rapid urbanization and the rise of the middle class in countries such as Ethiopia have produced a new generation of problem-solvers with a stake in their own nations. While unemployment still plagues Africa’s urban capitals, entrepreneurship has been a driving force of economic growth and is a direct response to many problems of the past, from capital formation to social inclusion. The fact that the world’s largest population of youth has begun to mobilize out of city slums and into improvised office buildings is, if anything, a major win itself. To that end, regional institutions, led by the East African Community (EAC) and African Union, have extended the vibrancy of African markets by fortifying cross-border trade relations between grassroots businesses on the continent. Efforts to increase economy of scale and reduce trade and transportation costs have yielded dramatic results.

Yet while the growth of its physical and human infrastructure has been exceptional, the most praiseworthy deliverable of Africa’s economic boom is its growing commodities and agriculture markets, providing its largest export revenue. Though it has always had potential in Africa, the agriculture industry did not thrive until governments were pressured by necessity — global food insecurity — and until improved political stability and democratization contributed to business-friendly regulatory infrastructures. Agricultural growth has radically transformed the African economic model as exports to “food-insecure” nations have increased returns to the land and have created a sustainable solution to unemployment. Progress regarding regulatory infrastructure has also helped African commodities markets. Infamously known for its “resource curse” following the legacy of King Leopold II’s imperialist stronghold in the Congo and the 1990’s “blood diamond” scare in Sierra Leone, Africa now sees the most export growth via its commodity markets. The increased transparency in these markets is truly cause for celebration. Following the Securities and Exchange Commission (SEC)’s Dodd-Frank legislation in 2010, multinationals on the U.S. stock markets are finally starting to be regulated. Major private sector players, led by Apple and Intel, have henceforth cleaned supply chains of conflict minerals found in common technologies, such as coltan and tungsten. Additionally, the Kimberly Process, a mechanism in place to monitor the world supply of rough diamonds, has improved its enforcement structures and supports development initiatives to decrease governments’ reliance on minerals for national income. Together, these steps have improved Africa’s largest industry, giving the international community fresh hope that the industry might increasingly promote human rights rather than perpetuate intractable internal conflicts.

Of course, the African economy still faces obstacles in the coming years. Neopatrimonial marketplaces and competitions for rent still threaten the internal political dynamics of the continent’s resource-rich economies, such as Nigeria and the DRC, while China and the West continue to scavenge its remaining resources. Terrorist finance is still prominent in Western Africa, where Al Qaeda and its affiliates have taken strongholds over the Malian economy, and drug trafficking remains a primary artery of trade within international clandestine markets. Most importantly, future African governments will be forced to protect the growth made within their new economies as climate change begins to take its toll on the global South, whether by seeking additional funding or by simply adapting to the stress of agriculture-debilitating weather patterns.

Nevertheless, there is no denying that the vision of the continent we see today is practically unrecognizable when compared to the struggling continent that was once the focus of international aid missions. After decades of struggle, Africa has finally begun to find sustainable and local solutions to its own problems. Indeed, it is finally Africa’s turn.