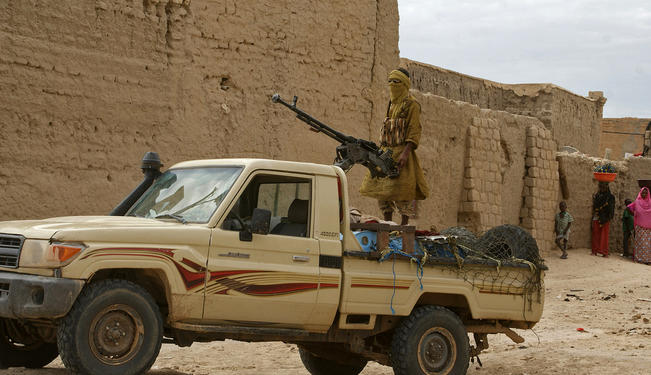 The fear that Mali could turn into another Afghanistan is unwarranted.

Just last month concern was mounting that stiff Islamist resistance in Mali, combined with the alleged presence of heavy or sophisticated equipment in the rebel arsenal, would lead to a protracted and difficult campaign. Even though the majority of the country has been retaken, and heavy losses have been inflicted on the Islamist coalition, this fear persists. Some still cling to panicked comparisons to Iraq or Afghanistan. This is unwarranted.

The anxiety caused by the realization that Islamist fighters planned on holding the line and engaging in street fighting was entirely misplaced and their capabilities continue to be overestimated. The choice of Islamists to stand their ground, and to counter-attack in border towns like Diabaly in central Mali, is the best of all possible outcomes. Instead of melting back to their strongholds in northern Mali to try and outlast French patience, the Islamist groups decided to expend precious resources in pitched battles that they could not hope to win.

The battle for the central-eastern town of Konna is a salient example of this. The city was along the Islamists central axis of advance and a critical objective for Ansar Dine and its allies. As a result, a considerable amount of resources were invested by the Islamists in the fight for Konna. According to reports, the Islamists deployed close to 1,200 militants led by a relatively famous rebel commander Iyad Ag Ghaly, formerly of the Popular Movement for the Liberation of Azawad (MPLA). They also seemed to be relatively well equipped and well supplied, as the initially stymied French-led advance indicated. It can be inferred that some of the best motivated and equipped troops, and one of the largest Islamist formations, were being committed to the battle.

Despite their stiff resistance, the rebels suffered between 50-120 fighters killed (including the death of Ansar Dine officer Abdel Krim) and scores wounded or captured, as well as the destruction of ammunition trucks and technical formations. These were enormous casualties. If the upper estimate of Islamist casualties is taken, without factoring wounded and captured fighters, it accounts for an attrition rate of 10% in less than a few days fighting. These are unsustainable losses that continue to hamper the Islamist effort today.

Islamist groups such as Ansar Dine and the Movement for Oneness and Jihad in West Africa (MOJWA) benefited dramatically from the fallout of the civil war in Libya. These gains fall into two fairly obvious categories: men and equipment. By far the greatest gain for the Islamists was in experienced manpower. The fighters that flowed to Mali included expatriate Tuareg mercenaries, Libyan veterans, and foreign fighters of great ideological vigor. It was these fighters who proved decisive in shifting the balance so rapidly against the underpaid and under-equipped Malian military.

Though it is extremely difficult to estimate the size of the forces under the rebel’s command, especially since the splintering of the MPLA-Islamist alliance after Goa, it seems clear that at least a few thousand fighters are involved in fighting. Of this total, probably no more than 2,000 are actually hardcore members of Islamist groups such as Ansar Dine, MOJWA, and al-Qaeda in the Islamic Maghreb (AQIM).

A problem of numbers is beginning to emerge for these groups. Every fighter that was lost in Konna or Diabaly was lost for nothing. It was inevitable that Islamist forces would be driven from these cities. Further, Islamist fighters were driven from every town and fixed position they chose to occupy. This problem is ongoing as experienced Islamist fighters are wasted in bloody actions against French supported security forces.

Guerilla groups, such as the Islamist groups of Mali, tend to marshal their human and technical resources very carefully. They build up cadres of experienced fighters, and gather the equipment and munitions necessary to continue and expand their campaign. After all, if there was parity of resources and power they would not be fighting an irregular campaign. When these groups transition to open battle, however, they expose themselves to heavy losses in both men and material which are often irreplaceable.

The experienced fighters, equipment, and ammunition that the rebels managed to bring from Libya and from other foreign sources are not limitless. These resources cannot withstand the rigorous demands of combat in conventional military actions. In fact, it is worth making a short assessment of the rebel’s military arsenal as significant analysis has been made of the quantity and caliber of equipment that the rebels managed to either purchase or smuggle out of Libya. These concerns seem largely exaggerated.

For example, when looking through photos of Islamist columns on the march, much of what Western media often calls anti-aircraft weapons are little more than BTR or BMD cannons (sometimes with turrets still attached) stripped off of Libyan vehicles and shoved onto the back of technical trucks. Often, these weapons are little more than DShK heavy machine guns welded to the back of a technical. In addition, there are also photos of weapons that looked like Soviet 51K or 61K man portable flak battery, and one that maybe was a ZSU. Ammunition for the latter weapon would be hard to keep stockpiled for prolonged operations, and is thus less of a concern due to the Islamists limited logistical capacity.

Rumors erupted early in the intervention that Islamists might be in possession of some old Libyan SA-7 or Igla SA-17 man-portable, shoulder-fired missile launchers, but these rumors have not been substantiated and seem unlikely. The reason this is unlikely is that if the rebels possessed them in any significant quantity, it would have been logical to use some as early as possible to try and force French aircraft to shift to higher altitude bombing. This is critical when talking about engaging French troops on the ground for sustained periods of time. That the Islamist rebels have never done anything to deter French close-air-support (CAS) missions should indicate that these weapons probably are not in their possession, or that they exist only in small or unserviceable quantities. In any event, most of this equipment was likely abandoned or destroyed in the retreat to the mountains.

What the Islamists actually gained were huge quantities of squad machine guns, RPGs, and extremely large quantities of ammunition. In the Battle of Aguelhok in eastern Mali, a major Malian military installation was lost early in the rebellion for the simple reason that the garrison ran out of bullets. This edge in basic material, not advanced equipment, is what contributed to the technical advantage the Islamists held over government forces.

Given the loss of most of what little heavy equipment they had in conjunction with the rearming of the Malian military, the Islamists have decisively lost whatever qualitative technical edge they may have had. Their real reservoir of strength remains to be their core cadres of disciplined, motivated, and veteran fighters. As the Islamist fighters continue to regroup and engage in open combat, however, they will subject themselves to eventual reversals, a prodigious expenditure of ammunition and equipment, and heavy losses in manpower.

This was most recently demonstrated by the series of catastrophic military actions engaged by the Islamists in the Adrar des Ifoghas Mountains that border the northern town of Kidal. The town has been the focus of heavy Islamist attention over the last few weeks as the Ifogha’s mountains affords unique tactical opportunities for raids and shelter. Ansar Dine, however, has still not shed its habits of organizing in an almost conventional manner with very large formations and fixed positions.

On February 19th Islamist militants launched a conventional assault on a fortified French position, killing a single French soldier, and suffering over 20 killed in turn. French reconnaissance subsequently was able to locate the principal and very large encampment of the rebels in the mountains. The ensuing military action, spearheaded by French and Chadian troops and supported by French CAS, led to a severe battle in which 93 Islamist fighters were killed and an unknown number wounded or captured.

These kinds of battles and skirmishes are inflicting great losses on Ansar Dine and are bleeding its capacity to continue actions elsewhere. In the space of a few days, almost 113 militants were killed. Moreover, the ferocity of the resistance indicates the likely presence of veteran fighters, another irreplaceable resource. The Islamists are not in an optimal position to launch a severe and protracted insurgency. Their greatest area of focus has been Kidal, and yet only a few unsophisticated and clearly inexperienced suicide attacks have been launched. Even these small actions have been primarily the result of the extreme proximity of Islamist militant bases to the tiny enclave town.

While there is an obvious desire, and imperative, to end the human suffering in Mali as soon as possible, it may very well prove beneficial to hope Ansar Dine and its allies keep on fighting French and allied forces head on as long as possible. This is the kind of fighting where the most damage can be inflicted on the Islamist militants and the greatest chance for potentially mortal attrition on their movements. In comparison, the International Security Assistance Force and the Afghan military would desire the Taliban to act like the Islamist militants in Mali, and abandon its asymmetric campaign and engage in major conventional warfare with extreme frequency. If the Islamist militants in Mali were to shift to a campaign of effective ambushes, assassinations, and bombings there would be cause for far more concern. There is no indication at present that they will do this. The longer Ansar Dine and its allies choose to fight conventionally, the more likely they will lose quickly.