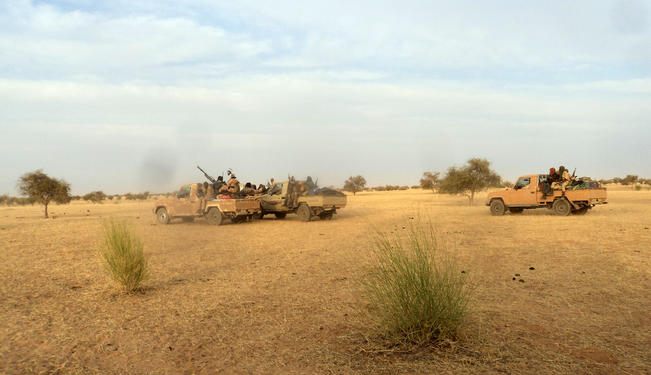 This article is the second of a three-part series featuring different perspectives on the recent developments in Mali.

"…This conflict is legitimate and vital to the security of the French. We can not expect to maintain our lifestyles and our prosperity if we do not go outside our country to participate in the stabilization and resolution of crises, eradicating threats that could inevitably threaten us from within our national territory.”

French General and former director of the College of Defense (CID) Vincent Desportes, spoke these words while answering questions from readers on the website of Le Monde newspaper. Francois Hollande, the “socialist” President of the French Republic elected less than a year ago, has just dragged his country into a war that threatens the entire region. He argues that this war has as its objective to help Mali, "a friendly country." If justice and friendship had been Holland’s target, he should have began by granting the right to vote for non-EU residents, as he had promised during his election campaign.

No one is fooled by the true intentions and aims of "going to war.” France, like many other countries of the North, knew what was happening in the Sahel, especially after giving a helping hand (a selfless act, as we were told) to the “friendly” Libyan people. It is the result of French intervention in Libya that the military arsenal amassed by Gaddafi found itself in the hands of various groups, led by those touting Islamism. It was easy to grasp what was in the making. Additionally, the company AREVA, vital for the "lifestyle and prosperity" of the people of the North, was having more and more difficulty retaining its French employees in the Sahel region.

This war is not a selfless and free act, and neither was the "liberation" of Libya and the removal of its tyrant. France, supported by its allies in Europe and the U.S., seeks only to defend and strengthen its "protectorate.” The wealth contained in the Sahel region is immense. It is also especially necessary for both the present and future of Europe, America, and Asia because it contributes to the preservation and amelioration of the lifestyle of people who live there, as so envied by Africans. It is imperative to ensure that the oil, gas, uranium, gold, and recently, shale gas, remain  in "good" hands, with the help and complicity of subcontractors under the command of the governments in the region. For the leaders of North and South, it is a win-win.

However, the same cannot be said of their people, especially those in the South. Already, there it is estimated that tens of thousands of people are crowded in refugee camps, numbers that do not include those who have suffered in areas of heavy fighting. From an economic point of view, it must be remembered that a very large number of families in Niger, Algeria, Mauritania, and Burkina Faso, remain almost exclusively dependent on tourism. For them, this war will only bring misfortune. It will do nothing more than remove resources from those who barely have anything, to give to those who already have a lot.

Without advocating inaction, I say that another way was possible, even if it has been seldom contemplated: firmness through political dialogue. A multitude of groups are in these areas, some of them, such as the Tuareg, have legitimate claims that they have peacefully brandished for ages. It was quite possible to strike the necessary agreements with certain groups, while isolating extremists. Regardless, this war, like so many others, will end around a negotiating table. In the meantime, the blood, the tears, and the economic and social distress will push many towards extremism in these countries of the Sahel region.

Of course, this does not mean we should excuse the leaders of the countries in the South.  They are the first to be responsible for the catastrophic situation that is being inflicted on their people. Their authoritarian and anti-social rule, their corruption, and their monopoly on the wealth of their countries as if it was private property, were the best breeding-ground for feeding the frustration of extremists of all persuasions. By following this kind of fundamentally unpopular policy, they have lost all legitimacy. Stripped of credibility within their own borders and consequently weakened abroad, they have become more and more vulnerable to the injunctions and other pieces of “advice” given by leaders from the North.

When one looks at President Hollande and President Bouteflika's embrace during the recent visit of the French President in Algeria, it is clear that the “new” relationship between the two countries will not break with the precedent: business interests will have first priority, then on to democracy, and the question of liberty and human rights will come later.  “And now I give you a Renault assembly factory for your beautiful city of Oran.” “And now, in return, I will open my airspace for you to play games with your warplanes.” This is, essentially, the substance of North-South relations. And too bad for those who thought that things would transpire differently. In fact, who would have believed it is possible that Algerian officials, so quick to use the past to maintain their rule in the present, would open their doors to a foreign invasion – an intervention of the French army in the Sahel, no less?

The task facing the usual press tied to the official powers is easy: make people speak of the “poor” Malians while smiling to thank France and Hollande who have come to their rescue. It would have been less costly in terms of human life and suffering to have helped the Malian state to improve the socieoeconomic conditions that the country has long been facing. This strategy is still possible, but we hardly consider it. Certainly it is good to see those who decapitate hands and heads scampering away (but heading to where, exactly)? It would have been even more pleasing and opportune to have not let them settle as easily as they have. It seems that the die had been cast long ago so that we would arrive at this situation–probably before going any further.

It is clear that this war will last and that the French engagement is a long-term engagement. The African troops will not be able to leave for the North for several months and we do not know how much time the operation itself will take.

These were the comments of General Vincent Desportes in the same French paper Le Monde. It is a fact that there are not many people who still believe that the war will be “clear,” as it was explained in the first few hours of the attack.  They have come, they have seen, but they will not leave so soon.

To end this war quickly there is nothing left to do except hope for a popular mobilization –  a phenomenon that has remained bizarrely quiet until now, especially in France. The progressive, leftist anti-war movements should express themselves and organize against this war, including the French Socialist Party.  I find it difficult – very difficult – to believe that there is only de Villepin, Mélanchon, or Mamère who are against this intervention.

In Algeria, as well, it is imperative to see such a movement take form.  The longer this war lasts, the higher the stakes will become, not the least of which is protecting the territorial integrity and the unity of the country.

That which is occurring in Mali will undoubtedly have serious repercussions for the North – as much for Algiers as for Paris. This has already begun. One would like to hope that the effects will be as least costly as possible.

A version of this article was originally featured by Jadaliyya. The piece was originally published in French and translated to English by Muriam Haleh Davis and Samia Errazzouki.