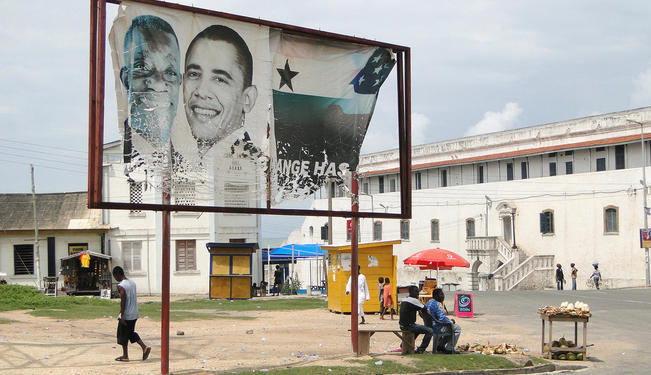 With the untimely death of Ghana’s president the nation’s state of democracy is put to the test.

On 24 July 2012, a dark shroud of sadness seemed to have cascaded over the sub-Saharan nation of Ghana owing to a bright light in the person of Professor John Evans Fiifi Atta Mills, President of the Republic of Ghana who died at the age of 68. Condolences to all Ghanaians!

President John Atta Mills was educated in Tarkwa in the Western region of Ghana and later at the Achimota School in Accra.  He furthered his studies at the University of Ghana and eventually at the London School of Economics and Political Science. After earning a PhD in Law at the School of Oriental and African Studies at the University of London, President Mills returned home to serve his country with a sterling career as a public servant.  He educated countless Ghanaian youths teaching at the University of Ghana for close to 25 years. During this time, he was a visiting professor to universities in the USA and Europe. He also served as the Acting Commissioner and later the Substantive Commissioner of the Ghana Internal Revenue Service.

He concluded his distinguished public career serving in the highest office of the land faithfully whiles advancing the cause of democracy and good governance in his sub-region.

His presidency was one of selfless leadership and lauded by world leaders like Barack Obama.Though leading a seemingly small nation, this year, President Mills was one of the few African leaders invited by President Barack Obama to the G8 summit. This gesture was no doubt also a recognition of the strong leadership he has given this beacon of African democracy in a region fraught with conflicts and other anti-democratic forces.

Democracy is a priceless normative ideal in Africa and not easy to cement at all. It takes a lot of guts and courage to stand against the odds and put the interest of the people above all else. President Mills did this bravely and even though he did not begin democracy in Ghana, it is uncontested that he has sustained and advanced what he inherited from his predecessors.

A laudable event that took place on the eve of the President’s passing at 8pm is the peaceful, smooth and orderly transition of power to Vice-President John Dramani Mahama. President Mahama will lead the nation until later this year when in December the scheduled presidential elections will take place.

This smooth and orderly transition is an exemplary way to honour the memory and legacy of such a great leader. It is a testament to the fact that Ghana might be coming of age democratically and is ready, able and willing to cement the gains of democracy gained by President Mills and his predecessors.

President Mills was set to run for elections at the end of the year but his untimely death has thwarted this plan and so his party the National Democratic Congress (NDC) had to re-nominate another presidential candidate. On August 30, they choose the incumbent president Mahama who garnered 99.5% of the votes cast at the NDC Special Delegates Congress. This peaceful transition within a major political party in Ghana is another mile stone worthy of  note for this fledging democracy.

Despite the smooth transition of power which is very laudable, Ghana is not entirely out of the woods yet. There are some lessons it can learn from history.

There is an old adage that those who refuse to learn from history are prone to repeat itsmistakes or challenges. In many developed nations, democracy has a long tradition and is sustained through strong well functioning institutions of state as well as a strong independent civil society. Presidents and individual figure heads in the political sphere do not need to drive or promote democracy. The already established institutions maintain it.

In many developing countries such as in many African nations, this is not the case. These do not have a long history of sustained democracy or strong state institutions that ensure the security or maintenance of democracy. This gap can be filled by strong leaders in the political sphere who have the authority and political will to drive the process of democracy and good governance. In these cultures, political parties and their heads i.e. the president become the sustainers and drivers of democracy while state institutions like the armed forces, legislature, judiciary and the executive take time to mature.

In the case of Ghana, this has certainly been true. President Mills like his predecessor was a major force in cementing the gains of democracy and his calm demeanor ensured peace between political parties and other actors within the political sphere. He was a uniting force. Though often the target of much ridicule from within his own political party and the main opposition party, he never fought back. He was truly an exemplary leader who put the need of Ghana ahead of himself. His successors would do well to emulate his example.

At times like this when a nation not yet fully established on its feet with fully functioning democratic institutions to maintain democracy independently of a strong uniting figure experience shocks like the removal of a central figure who worked tirelessly to maintain peace, it is possible for the gains of democracy to be withered because of selfish ambitions of different actors. This could transpire through provocative comments from leading political figures or political parties or unnecessary propaganda through media outlets that agitate segments of the population to react negatively. This phenomenon is not uncommon in Ghana’s history.

In Ghana’s history, the first government after independence was overthrown via a military coup d’état with the help of forces external to the continent. The coup makers once in government overturned all the social policies of the first government in favour of those of their backers. This is when free universal education and healthcare were cancelled. The repercussion can still be felt today For example Ghana is still struggling with achieving universal healthcare for all its citizens. This coup d’état was the first in Ghana which incidentally was the first independent nation in sub-Saharan Africa, a role model of sorts for the other sub Saharan states. The coup set a precedence which’s effects the continent is still reeling from today.  It opened the bloodiest chapter of coup d’états in the nation’s short history and that of the entire continent. But how did it begin? External predators found willing vessels of destruction in disgruntled, selfish and greedy elite group and exploited that weakness to the demise of a nation and a continent.

These shameless predators prey on vulnerable democracies because they stand to gain from the disintegration of social order in resource rich states or states that have geographic influence in a region. A perfect example of a manipulated local actor was Charles Taylor former President of Liberia. This man ravaged his part of the continent with bloody wars whiles exporting blood diamonds. At his trial, he confessed having worked for intelligence agencies including the CIA. Initially his confession was met with staunch denial by the CIA but soon through the freedom of information act, the ties were uncovered. However the nature of his work for and with the CIA remains shrouded in secrecy with Pentagon officials citing national security as a reason for the silence.

The fact that some intelligence agencies have in the past supported the overthrow of governments in the developing world is no secret. Their motives though might not be easily discerned.

Predators are not limited to external actors. In many cases, they are simply local actors who prey on the weak or exploit the vulnerable. In Ghana’s case, they could be  opposition parties who seek to exploit the weakness of their opponents in a time of grief like this, segments of disgruntled armed forces,  and/or other unenlightened members of society who live for self aggrandizement and place selfish individual agendas above the interest of the nation as a whole.

To Ghana’s credit, the opposition parties thus far have all acted in an exemplary manner. The main opposition party, the New Patriotic Party (NPP) has suspended all their political campaigns and has decided to mourn with the late president’s widow, his son and all Ghanaians. The armed forces have also sworn their allegiance to the new president and his government.

Ghana seems to be doing all the right things.  The hope is it continues.

The interest of blessed Ghana and its people must reign supreme in the psyche of all actors not only presently but also during the upcoming elections at the end of this year. If this mindset is adopted, then like the Phoenix rising out of the ashes, Ghana will rise out of this time of grief soaring as the Eagle braving the storm using the storm’s resistance as leverage to soar high as the famed black star of Africa. 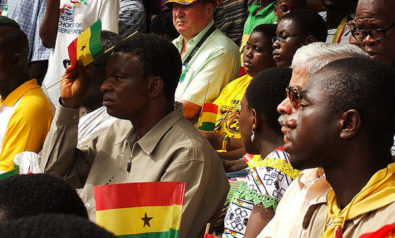