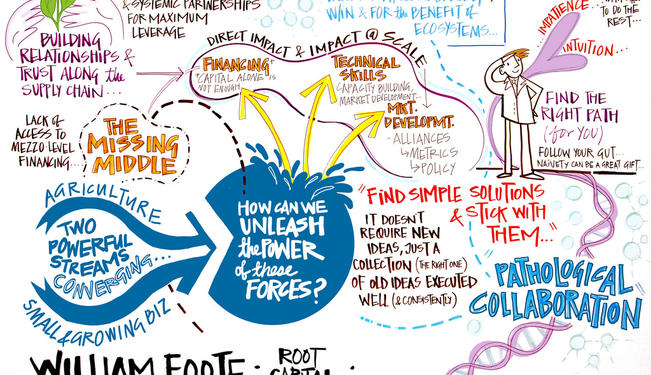 An analysis of how to create a balance of domestic interests in Africa and the interests of globalization.

As managing director of Goldman Sachs' South African office, Colin Coleman has witnessed, and advised, the execution of countless business contracts across Africa. Each deal — from China's US$9 billion copper deal with the Congo to Walmart's US$2.4 billion purchase of South African retailer Massmart — highlights the tenuous balance between domestic interests and foreign investment, and raises a set of key questions.

These questions become more pressing as Africa's economy grows and investors take notice. Africa today has 1.2 billion people, a US$1.8 trillion economy and real GDP growth of about 5.5% in 2011, Coleman pointed out. "When you look at the statistics, the fact is that Africa as a whole … is a significant contributor. It has a GDP that compares with any one of the BRICs."

Such questions led Coleman to wonder: Should Africa create a code for foreign direct investment (FDI) that would guide non-African investors as they increasingly seek out opportunities in Africa's growing markets? "Is there a case for an 'FDI in Africa code of conduct' that should be thought about, articulated, marketed, popularized, bought into and owned by investors, countries, and communities alike?"

Loss of Local Jobs
In a keynote speech at the recent Wharton Africa Business Forum, Coleman discussed what such a code might include. Here are some of the highlights:

An African investment code would have to address the question of local content. "What amount of local content is important?" Coleman asked. "When you look at local companies, are they in a position to challenge [MNCs] for their rightful place in their own home markets?"

The debate on local content came to a head in Walmart's recent acquisition of Massmart, a South African retailer and wholesale distributor that operates in 14 countries in sub-Saharan Africa. In the transaction, which Goldman Sachs advised, Walmart took a 51% interest in Massmart for US$2.4 billion.

Although the deal was announced in September 2010 and officially closed in 2011, the story is not over. "The scheme was made unconditional in May," says Coleman, but the departments of economic development, trade and industry, agriculture, and forestry requested a review of the competition tribunal's decision. The South African government was very concerned that local content — local procurement of a variety of goods that go into the stores of Massmart — was going to be undermined by Walmart's global procurement power." In a first ruling, the competition appeals court has asked Walmart to take back 503 dismissed workers.

The Walmart-Massmart transaction "lays bare the question of on the one hand, globalization bringing benefits to a local environment, and [on the other hand], protectionism within the countries that are concerned about loss of local jobs," small businesses and the dynamism that the industry has created, Coleman said.

The South African government has since negotiated a voluntary accord on local content procurement with the objective of acquiring 75% of their goods locally within South Africa, Coleman noted. Aside from whether such a measure will create the best outcome or whether it is enforceable, the question must also be asked: Is it possible? How can Massmart, for example, buy locally-made television sets that compete in price and quality with televisions manufactured in Asia? "We are not going to create in South Africa, in the short term, a manufacturing competitive environment" for televisions, Coleman pointed out. "So, yes, it's nice to have those guidelines, but how practical are they?"

The concept of reciprocity in relation to investment will be another key element in an African investment code, Coleman said. "I think it's very important that you have inward and outward flows. Everybody thinks that it's a one-way flow — from China or Brazil or South Africa into the rest of Africa. It shouldn't be that way. There are fantastic companies [in Africa] … that can help these other countries, like Brazil and South Africa and China, grow their economies. These companies can be competitive globally."

Dangote Cement, headquartered in Lagos, Nigeria, has the ability to be one of the largest cement companies in the world, Coleman said. Sasol, an energy and chemical company based in Johannesburg, South Africa, "has a fantastic edge in gas-to-liquid technology and could do very well." Whether private corporations or state-owned enterprises, he noted, local champions are important, Coleman said.

Creating a Win-Win Situation
It is also important that the investments benefit African countries and local economies, not just foreign companies and investors. This could come in the form of skills transfer, technology transfer, job creation or infrastructure development. An example of such a potential win-win is China's exchange with the Democratic Republic of the Congo (DRC), in which China promised US$9 billion in financing for roads, railways, hospitals and schools in exchange for several million tons of copper and cobalt. Such deals are "very material to the countries that we're talking about because of their low base of development," Coleman said.

Another example of reciprocity is Rio Tinto, an international mining company with dual headquarters in London and Melbourne, which has spurred development and invested in ports in Mozambique to support its coal mining initiatives there. "It's completely transformative for Mozambique as a country," Coleman said. "What was a relatively small economy with fantastic resources is becoming a much more dynamic and vibrant place to do business."

Reciprocity is valued throughout Africa, even in South Africa, which is wealthy compared to its neighbors. "When you talk to the South African ministries of trade and industry, they want to see beneficiation [of ore]," Coleman pointed out. "They want to see value-add from the resources coming out of the ground before it is shipped to the global markets."

Cultural and historic legacies should also be a part of an African investment code. "Issues of cultural and historic legacy have to be" considered, Coleman said. Many nations in Africa still struggle with problems stemming from colonization, social divisions and civil war. The DRC, for example, remains scarred by divisions created by Belgian colonization more than a century ago, when Leopold II, King of the Belgians, brutally mistreated the local population to exploit natural resources like rubber. In his book about the colonization, King Leopold's Ghost, Adam Hochschild argues that 10 million people died as a result. "The amount of tragedy that came out of that history is immense," Coleman noted. "When you visit the DRC today, you can feel it. So you have to protect the legacy of these communities."

As part of its consideration of historical legacies, an African investment code might consider employee ownership, a concept used in South Africa, to help "previously disadvantaged individuals" gain a foothold in the economy as it grows, Coleman suggested. "In the DRC, you could argue that a community marginalized from owning the rubber plantations although they lived on the land for hundreds of years, [should be considered] 'previously disadvantaged.'" Some kind of employee ownership might serve as "a progressive step" moving forward, he said.

Capital a Key Issue
As foreign investment flows into Africa and economies grow, capital controls and liquidity are also becoming important issues. An African investment code might need to address the flow of capital in and out of Africa, as well as transparency in the stock markets and issues of liquidity. "How do you manage the flows of capital?" Coleman asked. "Facilitating liquidity depth and free access to global markets and standards while strengthening African standards is a very important challenge."

The question is pivotal for Africa, where local financing is expensive. How governments approach capital flows is important not only for foreign investors but for the economies themselves. Coleman posed this hypothetical scenario: If a large local champion in Nigeria wants to raise capital on the London stock exchange instead of the local Nigerian stock exchange, is that good or bad for Nigeria? "It may appear bad for Nigeria's stock exchange, but unless there's enough liquidity on some of these counters, you're not going to be able to trade them," Coleman stated, adding that it would be "self-defeating" for African countries to limit their companies to listing only on local exchanges.

An African investment code might also address how Africa could develop regulatory oversight to protect domestic interests while still optimizing foreign direct investment. "This is very difficult, because on the one hand you want regulation, but you don't want the wrong regulations," Coleman said. "The wrong regulation is going to stop FDI — and these countries need FDI."

For example, South Africa is "near the edge of testing the patience of investors" in the natural resources sector, he pointed out. A host of empowerment codes, royalties, environmental regulations, rules about local content and a variety of other measures has driven business away. "South Africa has made itself relatively unattractive, and the government is aware of that and is debating the best way to pull back and make balances happen. We have just been through a resources boom and South Africa has largely missed that. It doesn't necessarily leave a good taste in the mouths of South Africans."

The world is "a very complex place today, and Africa's place is clearly growing," Coleman concluded. An African investment code might help Africa as it grapples with questions of nationalism, competition, local content, economic participation and the movement of global capital. Africa's time has come, Coleman said. "I am very confident that what we're witnessing is the unfolding of a very exciting story."

The views expressed in this article are the author's own and do not necessarily reflect Fair Observer’s editorial policy.
*[This article was originally published by Knowledge@Wharton].