Democracy is in crisis across the globe. The problem of understanding what “the people” want or whose authority they will accept has become a dilemma for both the new democracies with their fragile economies that emerged in the period of European decolonization following World War II and the established, supposedly stable democracies of the West.

As the headlines reveal every day: the United Kingdom doesn’t even know if it will remain united; the US is facing an impending “civil war” based on electoral demography that has undermined the very idea of democratic collaboration; Europe as a whole, along with many of its component nations, has become rudderless; and India is coursing toward ethnocentric authoritarianism.

Africa emerged from its colonial past in the second half of the 20th century to become a continent of young nation-states. Though deemed a “shithole” by US President Donald Trump, Africa is a continent incomparably rich in natural resources, whose governments are courted for economic advantage by the powerful nations of North America, Europe and Asia. Africa makes the headlines in the West primarily when human catastrophes occur: terrorism, tribal warfare and spectacular diseases like AIDS and Ebola. Now, political analysts have located and identified a new pathology in Guinea and dubbed it a pathology possibly fatal for democracy. They call it third-termism.

An article on Al Jazeera by Adem K. Abebe highlights the case of the second term Guinean President Alpha Conde, who apparently sees little reason for abandoning his responsibilities as required by the constitution in 2020. As other presidents in other nation-states have demonstrated, constitutions can be amended for the sake of stability.

Abebe writes: “Guinea is not the only country in Africa that is grappling with the problem, dubbed ‘third-termism’, where incumbents either eliminate or modify presidential term limits to cling on to power. Many countries, from Egypt to Uganda to Comoros are facing the very same problem today.”

The article indicates the scale of the problem today. The African Union, with its 55 member states, plays a role of benign oversight as a kind of moral force for political stability on a continent that has never recovered from the humiliations of European colonial rule and exploitation. According to Abebe, though the pan-African organization formally bans abusive revision of constitutions, “the AU has never publicly invoked this prohibition, despite the prevalence of third-termism across the continent and has largely remained silent in the face of ‘constitutional coups’ – incumbent leaders making amendments to the constitution to avoid term and age limits.”

This kind of debate highlights a range of problems about the status of democracy itself everywhere in the world, not limited to the nations that President Trump’s surreal imaginings led him to refer to as the “totally broken and crime infested places” he believes American legislators with dark skin hail from. Although in only his first term himself, Trump has repeatedly “joked” about holding on to the presidency after a second term. Some commentators seriously anticipate that he may contest the results of the 2020 election if he loses, which could eventually precipitate a constitutional crisis.

The UK has offered the world another form of existential crisis for democracy. Theresa May, Boris Johnson and Jeremy Hunt have all claimed that the 2016 Brexit referendum, which has no force of law and should only be deemed a “call to action,” is an absolute and inviolable expression of the people’s will. Out of fear of seeming inconsistent, they won’t acknowledge that insisting on their primitive version of democratic expression (a one-time vote and no afterthoughts allowed), they may be directly undermining the basic principle of representative democracy. At the same time, in terms of theory of government, their understanding of democracy appears to offer nothing more than a chaotic alternative to the traditional concept of representative democracy: rule by referendum, with zero guidelines as to interpreting the results and transforming them into enforceable law.

In other words, across the globe, democracy based on the premise of the consent of the governed seems to have degenerated into a pure power struggle among those who deem themselves worthy of governing.

The very notion of democracy has been challenged in recent decades by two convergent forces: the inexorable globalization of the economy and the heritage of a dominant half economic, half political ideology. The ideology results from the combined force of “free market capitalism” and the spread of technologies, including the internet and mobile communications. Both were initially designed for the expanding needs of warfare spawned by the military-industrial logic of the Cold War.

At the purely cultural level, the acceptance of competition as the principal organizing factor in human relations triumphed in the US to be subsequently spread across the globe. Social Darwinists from Yale Professor William Graham Sumner to the Koch brothers, aided and abetted by the media, have actively spread their simplistic ideas to the point of their being confused with “common sense.”

Sumner called competition a law of nature. And that’s how most people in the culture now think of it. This means that any modern historian or economist who dares to remind us that belief in the magical efficiency of competition is a very recent historical innovation will be accused of being naive and unrealistic. No political system can resist the combined pressure of such powerful economic and cultural forces, though part of the purpose of democracy in most citizens’ eyes is to ensure some form of collective sovereignty, which, it is important to add, does not necessarily equate with the limited and discrete sovereignty of the nation state.

Brexit provides the perfect example of confusion on this point. A harmonious international order requires the acceptance of different levels and even orders of sovereignty. Until at least October 31, citizens of the UK have been aware of the sharing of sovereignty as a kind of tolerable overlap that included the country they live in (e.g., Scotland or England), the nation (the UK), the region (the European Union), the military alliance (NATO) and the community of nations (the United Nations). Beyond that is the idea of humanity itself.

If we take seriously the idea that democracy means government by the people and for the people, then logically the different layers of social interaction that result in groupings of people invite variable notions of sovereignty. It is a form of sovereignty that may not necessarily be written into the law but felt as a question of collective responsibility.

Third-termism appears today as just one example of the general crisis of democracy that affects the entire globe, a crisis aggravated by the awareness that the biggest and most urgent problems — the fate of the planet itself, for example — are ones no individual nation-state can hope to solve. Expecting that problem-solving by the voluntary cooperation of competing nations will work is illusory because the cultural “law” of competition that guides all governments’ policy orientations (“America First,” for example) fatally trumps any effort to collaborate at problem-solving.

Is democracy doomed by its refusal to go beyond the concept of the nation-state? Can a reformed model of democracy be imagined and put into effect? And, if so, will it be viable?

To some extent, that was the poorly formulated idea behind the Common Market and then the European Union. But because though committed to democratic principles it has never seriously asked the question of what democracy actually means beyond the legal definition of its institutions, it is either still a work in progress with growing weaknesses or a doomed adventure. 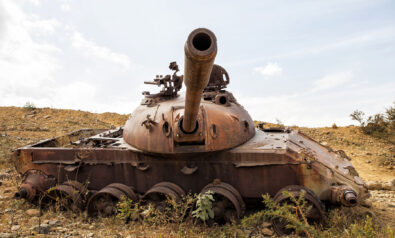