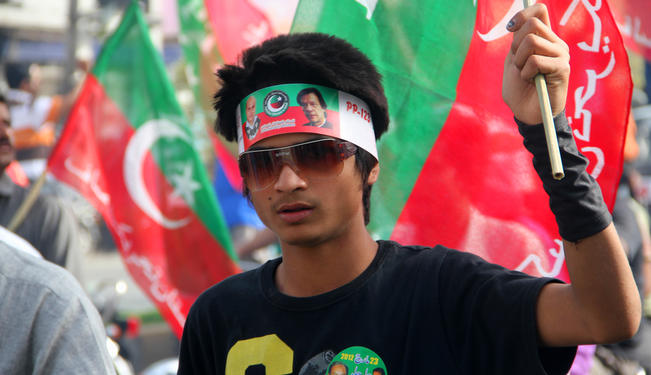 The national election in Pakistan looks like a game of polarisation, but if democracy is meant to provide some relief and prosperity, all political parties have flopped, bottom up. The field is now wide open, and anything can happen — including a hung parliament.

Thank God I am many things but not a political pundit. That species grows on trees and bushes in present-day Pakistan. Another election commences – and as some cynics put it, and so is more heartbreak! With the deadline now into hours, the field is wide open.

Anything can happen. A few days back, Imran Khan helicoptered to eight cities amid much mingling with the great unwashed, making speeches and promising a ‘new’ Pakistan. Eventually, he fell down – heat and slogan exhaustion taking its toll. Eight cities of pushing and shoving is no joke and when Khan is the fast pacer from both ends of the wicket, there has to be a breakdown. There was.

So what does it look like? That’s an easy one because there are more opinions and theories than mosquitoes. On the loony side, the Martians have landed and are in charge – though of what, they are still figuring out. On the less wacky side, it looks like a game of polarisation, a hung parliament and a season of mangoes and horse trading round the bend.

The lawless KP (Pukhtoon Khawa/Khyber Pakhtunkhwa) – everyone preferred the more romantic North Western Frontier Province – is committed to self destruct. There is no respite. Bombs explode with more regularity than PIA (Pakistan International Airlines) flight schedules. Those killed and maimed run into the thousands. The blood-thirsty Taliban, surely descended from Lord Dracula, are seemingly short on ideas but happy with their version of the Big Bang. Members of the ANP (Awami National Party), the leading party in KP, are either jailed, dead or missing. What happens here on May 11 is not anyone’s idea of a walk in the park. An area that specialises in lawlessness and armament manufacture is not going to change for this or another hundred elections. And if all else fails, it is wise to remember that the only usury-practicing people are the KP residents. Smuggling and buying-selling illicit goods is the only credo they own.

The Baluch have their own problems to deal with, split between staying with Pakistan or staying without. They have had the devil’s own luck being the country’s largest and most impoverished province, which remains the fiefdom of the Sardars who ensure that the people remain where they are. What will change the game here is hard to tell. The armed forces have had a go more than once with predictable failure and political dispensation has been tossed out in bits and pieces — more bits than pieces. If there is a ground swell of momentous proportions, then it has to be a closely guarded secret.

With Sindh more sinned than sinned against, most opinions would harp on more of the Pakistan People’s Party (PPP) and the Muttahida Quami Movement (MQM) not to be confused with Beethoven’s sixth. Its track record, at one time, in Pakistan’s largest city Karachi, was held up as exemplary but somewhere along the way it seems to have fallen into a ditch.

Like the KP, there is a great deal of unrest in Karachi and a dozen deaths daily don’t even stay the main news 12 hours later. Many Pakistanis believe that thanks to the most inept party ever to get into power, the PPP and the UK-telephone-led MQM, Karachi’s woes are multiplying at dizzying speed. I think the city, the hub of commerce, remains shut most days thanks to strikes, more strikes and more strikes. With a burgeoning Pathan community – mostly workers seeking better fortune – the city has become a melting pot of ethnic cross-confusion; calling it culture would be a grave mistake. So head-on collisions are par for the course and in this pot, most place their money on the PPP-MQM and more ass-trading.

That brings us to Punjab or the main stadium. Most think that the ‘game’ is on in Punjab. The PML-N (Pakistan Muslim League-Nawaz) Group seems certain to deliver, although the party and both brothers look like deer caught in the headlights. They have been flummoxed dealing with the ground swell of young audiences that have thronged to Khan’s forays; against the much-charged Khan, the Mians look like fat uncles at a birthday party. But insiders say, the Mians have their bases covered with years of political greasing, logistical superiority, caste (baradari) voting system and sheer knowledge of the Who’s-Who in Punjab. So Khan may have a few run outs to contend with and a middle order collapse.

People by and large have the same gripe against the Mians as against the corruption-infested PPP. Both have had five years and both have zilch to show for it. The Mians meant well but the quality of advice given and taken has raised serious concerns about their onions. Obscene amounts of money have been squandered by a bankrupt Punjab on widening roads; building under- and over-passes; creating a monstrous overhead where double buses run a 28km stretch; a school system for just a select few with facilities hard to find anywhere in the world and so on. Somehow, the Mians are convinced that building roads leads to prosperity and everlasting fame. Doling out Dell computers will eradicate illiteracy — sure. Strategic thinking and money management is not their strong suit.

The Asif Ali Zardari circus has become internationally famous and the party’s yen for squeezing money from the hardest rocks is now the stuff of legends. They have given nothing and taken everything. Khan’s immediate take-off and ascending popularity is a direct result of the loathing people have developed for Zardari and his clowns, one idiot replacing another. No wonder that the entire pointless campaign of the PPP showcases Zulfikar Ali Bhutto now dead since 1977, Benazir since 2007 and Bilawal, who is neither here nor willing to lend a helping hand to Mama’s party. Daddy Z has all but disappeared, probably into one of the many bunkers he has in Islamabad and the 13-minute video tape released by Bilawal’s think tank has to be the funniest video ever.

If democracy is meant to provide some relief and prosperity, all parties have flopped, bottom up. The marginalised still struggle and to top it all, the most prosperous province is shut down 12 hours a day for lack of power — but we have a motorway that has lost millions in just a few years catering to perhaps just 9% of car owners. The rest can, as they always have, hoof it. And as for the party manifestos, it seems the same person has written them all. It’s all in the future tense and it’s loaded with clichés. About the real world, none has anything to say.

Masood Hasan is a Lahore-based columnist who has written for English dailies over a long period. He has been a regular contributor to The Khaleej Times, Midday, and other newspapers and periodicals, and is the author of the book: “The Doggone Years.” He writes on social issues, politics, the human condition and cricket.

*This article was originally published by Gateway House.