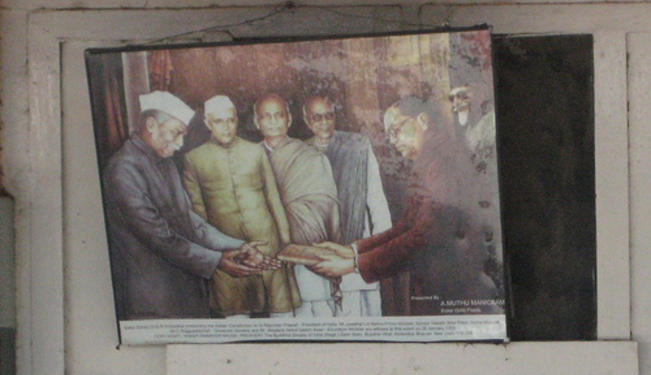 The Indian Constitution is in dire need of reform to ensure democracy and efficient government.

The Indian Constitution came into force on 26th January 1950 and completed 60 years in 2010. It is time to take a look at whether the Constitution has given India an efficient and effective government. This essay will look at two aspects of the constitution: centre-state relations, and the election process.

From 1941 to April 1947, there were vigorous negotiations between various Indian political parties and the British Government regarding the transfer of power to Indians and the granting of independence. These included the Cripp’s Mission, the cabinet missions, and negotiations in between and after the missions with the Governor General. The discussions had two basic premises. First was that the entire sub-continent would remain as one political entity. Second, it was generally assumed that the central government would deal with only a few subjects of common interest, such as defence, foreign affairs, currency and communications; the provinces would be autonomous with regard to all other subjects. This was considered necessary and desirable not only by the Muslim and Sikh minorities but also by leaders and thinkers in the various provinces. This also took heed of the wide divergences and disparities among the provinces, with regard to history, culture, and language. All political negotiations were based on these givens until almost April 1947, but no agreement could be reached, especially between the Indian National Congress (INC) and the Muslim League, with the latter insisting on the division of the country into two independent states.

Lord Mountbatten succeeded Field Marshal Wavell as Governor General and Viceroy of India in January 1947 and continued the negotiations started by Wavell, till the end of March 1947. He came to the conclusion that no agreement was possible between the INC and the Muslim League and that the British Government had to impose a solution and quit India as quickly as possible, as law and order were becoming increasingly difficult to maintain. When he first came to India, Mountbatten announced that the British would quit India no later than June 1948. But after March 1947, he received permission to announce an imposed solution from the British Cabinet. This announcement was made in the first week of June 1947 and involved the partition of the Indian subcontinent into two independent states—India and Pakistan. This was to take effect from 15th August 1947, hardly ten weeks from the date of announcement.

The provincial legislative assemblies and the central legislative assembly elected a Constituent Assembly for the entire country in 1946, with reservations for Muslims, and scheduled castes and tribes. The first meeting of this Assembly was held in late 1946 and was boycotted by most Muslim members. After electing a President, the Assembly adjourned to meet again in 1947. It was hoped by then, some agreement would be reached that would enable the Muslim members to participate in the proceedings.

However, no agreement was reached. The country was to be divided into two separate entities. The Constituent Assembly also split along the lines of the proposed division. The moment it became clear that partition was to be imposed, the attitude of political leaders towards the nature of the to-be-drafted constitution, changed entirely. Now that Muslim majority provinces would not be a part of India, Indian leaders did not feel obliged to have a weak centre and strong, autonomous provinces. Instead they opted for a fairly strong centre, paying lip sympathy to the concept of federalism. They ignored the wide disparities and differences among states.

The Indian Constitution has three lists of subjects. One enumerates the subjects which are solely in the purview of the central government, the second, all the subjects which are the responsibility of state governments, and the third, known as the concurrent list, contains subjects on which state and center can jointly legislate. Any subject not included in the state list or concurrent list becomes the responsibility of the centre. This division of responsibility has made the centre very strong while the states have been reduced to the level of the centre’s clients. The centre usually passes laws that are uniformly applicable to all states irrespective of their social, economic, and cultural contexts.

It should be remembered that the populations of some Indian states are larger than that of entire countries, and that there exist regional disparities due to both geography and history, even within the states themselves. Central schemes are naturally unable to accommodate all the disparities and therefore become difficult to properly implement.

This has been a serious defect of the constitution’s division of legislative rights and has led to conflicts between regional interests and central policies. Because of this, regional parties have come up in almost every state. The all-India parties (such as the INC, Bharatiya Janata Party (BJP) and the Communist Parties) have gradually been reduced to the level of regional parties with strongholds in a few states each. Because of the proliferation of regional parties, the 543-seat Lok Sabha (lower house of the national parliament), now has representatives from more than 30 parties, and no single party is able to form a government on its own strength.

The Indian Constitution did not envisage such a situation. As in Britain, the framers of our Constitution assumed that there would be no more than two or three parties in parliament, with one party having an absolute majority. The present situation sees a coalition government where the INC (with about 210 MPs) is supported by an assortment of other parties that give it the majority required to form and keep the government in power. The smaller supporting parties are able to get their way with the INC government by threatening to withdraw support if their demands are not accommodated.

The representatives of the Communist parties that hail mostly from Bengal and Kerala, effectively used this strategy between 2004 and 2009. The present Lok Sabha is suffering the same blackmail, but this time at the hands of the Trinamool Congress led by Mamata Banerjee from West Bengal. If she finds that a national policy doesnot suit West Bengal, she opposes it and threatens to withdraw support from the government if the latter insists on implementing the policy. The government has to reluctantly hold up or abandon the proposed policy. A party with barely 20 members in a parliamentof 543 members is thus able to paralyse the government.

This situation has been in existence since 1989 and is likely to continue forever under the present constitution that is not suited to the coalition politics and regional demands in the country. The only remedy is to limit the subjects to be dealt with by the centre to those that are of common interest to all states and to keep all other subjects on the state lists. This requires a major change in the basic structure of the constitution.

The second aspect of the Indian Constitution that one would like to examine is the electoral system. Fourteen elections to the Lok Sabha have been held since Independence, and it is generally agreed that they have been fair and free. However, one glaring defect in the system is that most electedcandidateshardly receivethe support of 25% of the voters in their constituencies. Whether they really represent the constituencies and whether we can call ourselves a truly democratic polity are moot points. We must devise a system whereby the elected person has at least the support of 50% of the voters in his constituency. In the present system, which stems from the British model, a number of regional and national parties contest every seat, whether for the Lok Sabha or the state legislative assemblies. An average of seven candidates are known to contest every seat and in some cases the number may be as high as 30 or 40. Naturally, all-India parties like theINC, BJP, and the Communistparties, place candidates in every constituency. In addition, every state has regional parties that are mostly interested in defending local rights and also send candidates.

The last 14 elections to the Lok Sabha show that the national average of voters exercising their franchise has been around 65%. Generally, the partythatwins a majority or largest number of seatsreceives35-40% of the votes polled. In almost every constituency, a particular community or caste accounts forat least20% of voters. Parties are aware of this and try to get elected by pandering to sectoral interests. This strategy has been used nationwide by the INC. Similarly, regional parties in Uttar Pradesh, India’s most populous state, have targeted vote banks based on caste and religion to win state elections. This strategy allows a candidate to get elected with a relatively small percentage of total votes, and has led to the perpetuation of the caste system and the proliferation of sub-castes.

An alternate system of elections has to be devised. First, it must ensure that citizens exercise their right vote. Second, a system of runoff election should be introduced where the top two contestants of the first round of polling, stand against each other in a second round. One of them must receive more than 50% of the votes cast in the second round in order to win the election. If this system is adopted, appealing to sectoral interests and minority groups will not be sufficient to guarantee victory for candidates. Parties must have broad based programs that serve people from all castes and communities. This system would also help diminish the importance of caste.

If the above two amendments are made to the Constitution, the country will be a truly democratic, federal polity.