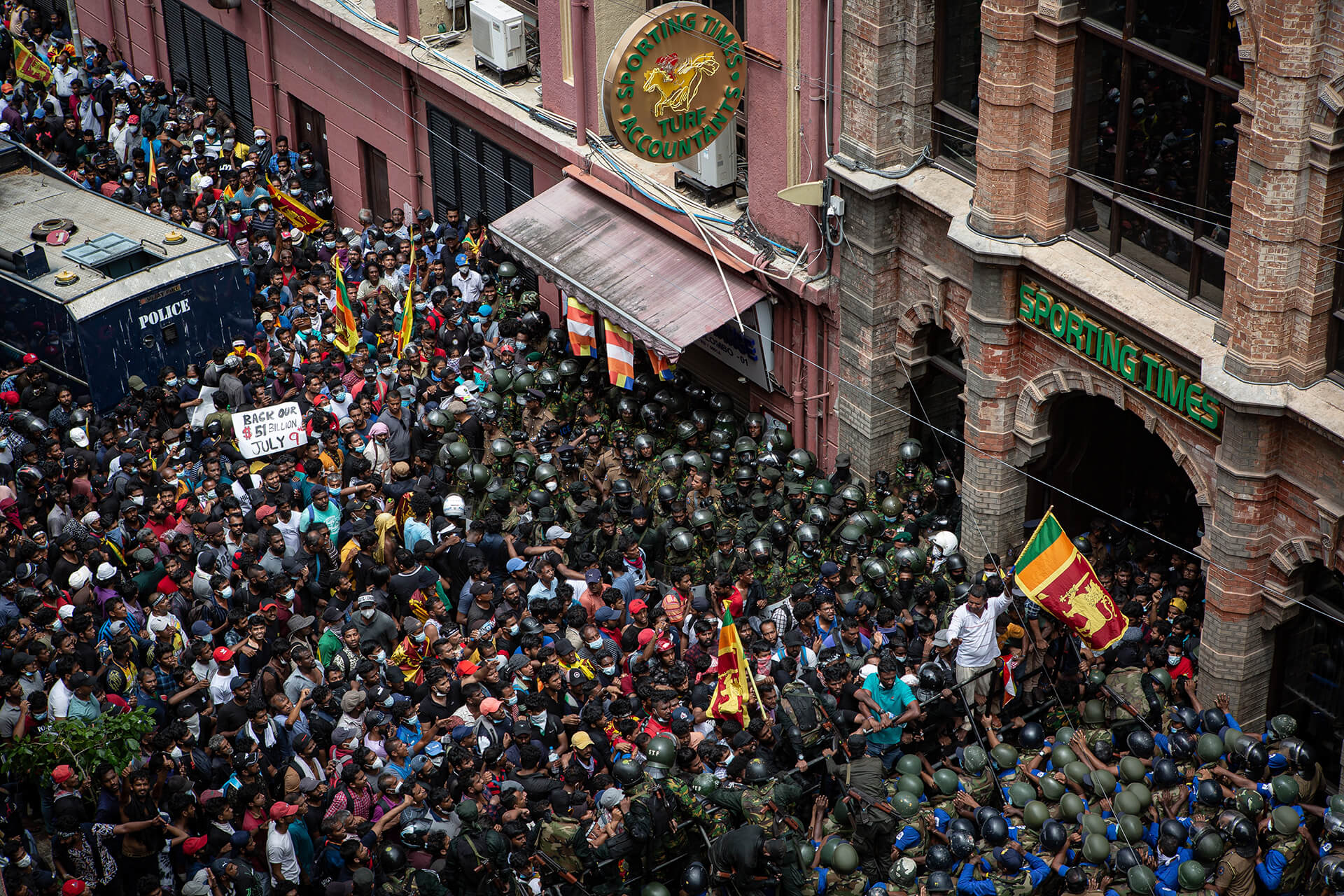 The pattern is becoming too obvious for the comfort of policymakers in Washington, DC. They must be aware of it, but they simply cannot change their habits. This is partly due to the fact that they count on the legacy media in the US to keep every story framed in the way they prefer. But readers across the globe have begun to catch on.

What is the pattern I’m referring to? Quite simply the systematic accusation of crimes committed by rival nations, which may be real enough, but rarely rise to the dimension and magnitude of the same crimes perpetrated by the US. The most obvious example was encapsulated in George W Bush’s gaffe earlier this year when, intending to denounce Vladimir Putin’s invasion of Ukraine, he vilified “the decision of one man to launch a wholly unjustified and brutal invasion” of a country he inadvertently but accurately called Iraq.

Then there’s the eternal question of corruption. The US prides itself on its standards of transparency that make corruption unthinkable in politics. At the same time, it routinely denounces the very real and often manifest corruption of nations in the Middle East and elsewhere.

For at least the past century the average American believed this to be true. After all, the nation’s laws had made it practically impossible to engage in the simple quid pro quos commonly practiced in many parts of the world. Things have changed. According to a 2021 Pew survey, 67% of Americans think that “most politicians” are corrupt. Serious studies have demonstrated that the entire political system – supposedly of, by and for the people – has become one of oligarchic control. That number has probably risen in the past year as stories concerning Donald Trump, Nancy Pelosi and Hunter Biden have highlighted the incredible sums of money that end up in the hands and bank accounts of politicians and their families.

At a moment of history, the fear that rogue states, such as Iran, may possess and use nuclear weapons has never been more real. But that fear, a matter of vague speculation, pales in relation to a very real risk of nuclear annihilation provoked  by the current situation in Ukraine, pitting the US against Russia. When US President Joe Biden commits to supporting the war “as long as it takes,” the occasions for a nuclear “accident” will only multiply. The US is after all the only nation ever to have used nuclear weapons. And on that occasion, the target was almost exclusively civilian populations.

Ever since the beginning of China’s proclaimed Belt and Road Initiative, Western analysts have denounced a practice they see as threatening to compromise the sovereignty of nations in need of external assistance. Andrew Backhouse writing for the Australian news site, new.com.au sums up the Western complaint. “Critics argue China is involved in ‘debt trap diplomacy’, alleging the country issues loans in order to eventually secure strategic international assets.” But the art of pushing nations into a debt trap has been fundamental to US foreign policy at least since the end of World War II. The World Bank and the International Monetary Fund (IMF) have been systematically used to that end, not necessarily through direct manipulation, but through the imposition of ideological constraints.

Washington Post columnist Ishaan Tharoor in July accused China of having “a hand in Sri Lanka’s economic calamity.” He pointed out that  in 2020 Sri Lanka “received a line of $3 billion in easy credit from China to help in the repayment of its existing debts.” This choice was made “rather than taking the more painful steps of restructuring its debts in dialogue with the IMF and pushing through austerity measures to appease the Paris Club.” In other words, Sri Lanka broke ranks with the hallowed tradition of relying on Western management of struggling economies. The system was built to systematically favor the interests of Western investors, to the detriment of populations condemned to hoping some day to benefit from the vaunted liberal model of trickle-down economics. In reality, it is a system of “trickle out” to transnational corporations.

Tharoor blithely concludes that Sri Lanka’s choice “appears to have been a mistake.” He presents the current crisis as a cautionary tale about the risk of deviating from the traditional model of dependence. He cites as “realistic” the judgment of Ali Sabry, Sri Lanka’s caretaker finance minister who earlier this year complained, “we should have gone [to the IMF] at least 12 months before we did.”

There is no doubt that for a host of reasons Sri Lanka can be considered “a textbook case of how an economy should not be managed.” But laying the blame on China alone makes no sense. Moreover, citing it as an example of China’s supposed debt-trap diplomacy, as many Western critics have been doing for the past two years, is contradicted by reality at every level. As progressive journalist Benjamin Norton has noted: “Sri Lanka owes 81% of its external debt to US and European financial institutions and Western allies Japan and India. China owns just 10%. But Washington blames imaginary ‘Chinese debt traps’ for the nation’s crisis, as it considers a 17th IMF structural adjustment program.”

The most obvious contradiction of the Chinese debt-trap myth appeared in this week’s news about China’s massive act of debt forgiveness in Africa. Backhouse reports that “China has pledged to forgive 23 interest-free loans for 17 African countries and will also provide food assistance to the struggling nations.”

The Australian journalist goes on to cite recent studies that expose the myth of China’s supposed debt-trap diplomacy. “But the concept of a Chinese ‘debt trap’ has also been criticized, with a study in 2020 finding China had restructured or refinanced about $21 billion of debt in Africa between 2000 and 2019. The study also noted there was no evidence of ‘asset seizures’ and that Chinese lenders had not used courts to enforce payments, or applied penalty interest rates to distressed borrowers.”

There can be no doubt that creditors, whatever their nationality, enjoy a position of relative power over their debtors. That power can easily be abused. Pretending that the financial assistance provided either by the IMF or China should be thought of as an act of pure, disinterested generosity may serve the interests of the creditor state’s propaganda, but it flies in the face of both economic reality and human psychology. In his book, …and forgive them their debts…economist Michael Hudson exposed, in historical detail, the fact that in ancient times, dating back to the growth of Mesopotamian civilization, debt forgiveness was an essential tool of government. The late anthropologist David Graeber developed a similar thesis in his best-seller, Debt: the first 5000 years. Jubilees were acts of massive debt forgiveness that permitted not only the renewal of economic relations but also contributed to a sense of solidarity that is required in all complex societies.

Sri Lanka’s crisis illustrates a much larger crisis, of both a geopolitical and economic nature. We are witnessing a major loss of faith not just in the authority that imposes and enforces the supposed rules, but of capitalism itself. The essential problem derives from the rigidity of the rules themselves. All debts must be paid. All debtors must be humbled.

The rules-based order is incapable of even imagining, let alone implementing the great acts of debt forgiveness of Hammurabi and other powerful rulers in the remote past. But that limit on global political power is just one element of the current crisis. The misuse of economic power, a more banal version of debt-trap diplomacy that has been an integral feature of the vauntred “rules-based order” has now emerged visibly as the central weakness of a system that breeds injustice.

John Perkins’ famous book, Confessions of an Economic Hit Man, offers direct testimony highlighting how the creditor-debtor relationship built around the US dollar and the international institutions created to administer the rules-based order has contributed to the deprivation of sovereignty of many struggling nations, especially those rich in exploitable resources. By design, not only governments but entire populations were meant to fall helplessly into the trap