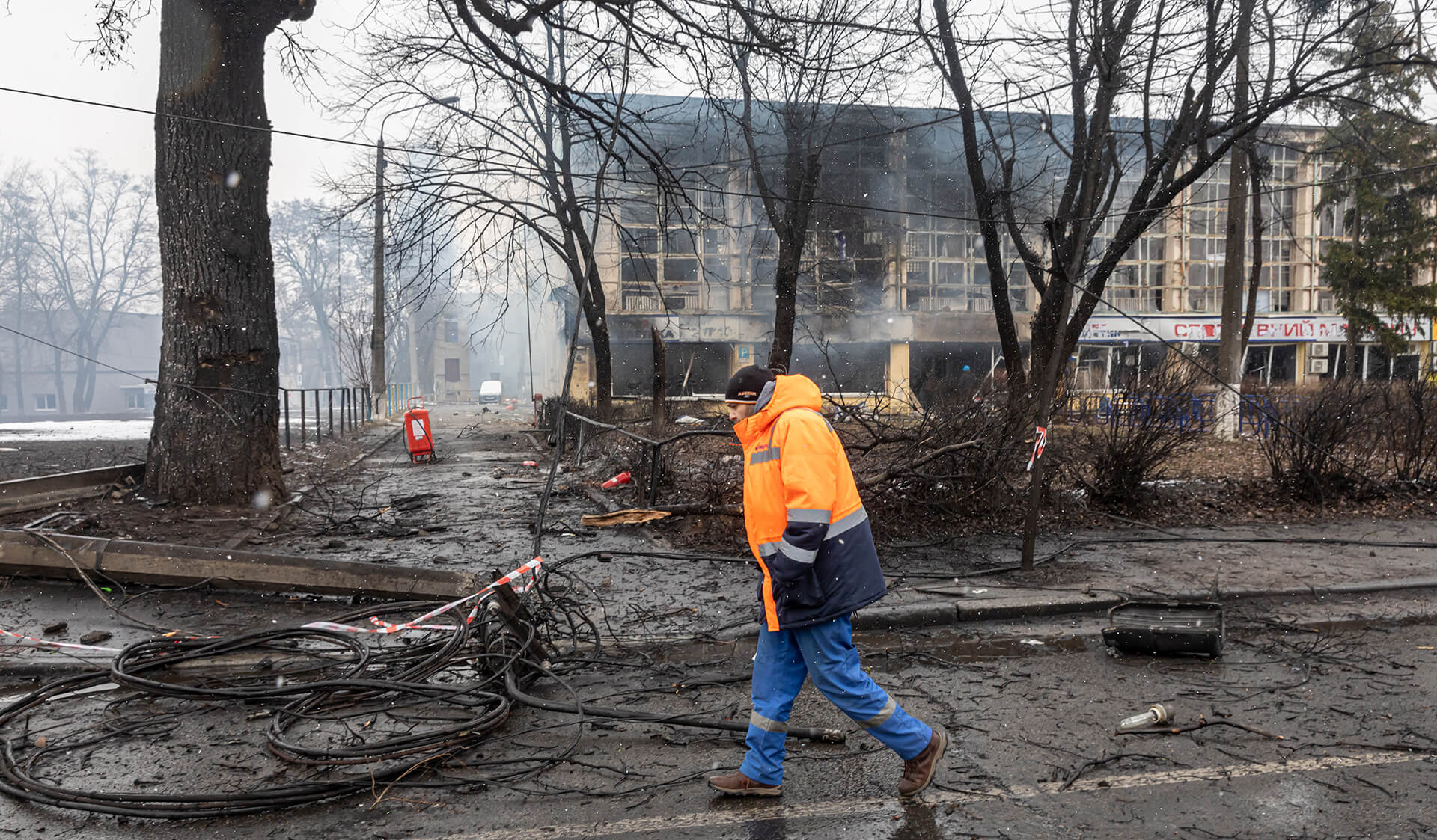 War of Russia against Ukraine. View of a civilian sports club gym and sporting goods store damaged following a Russian rocket attack the city of Kyiv, Ukraine © Drop of Light/Shutterstock

To be clear at the outset, what is going on in Ukraine is horrific. With nothing more at the ready than a national ego bruised by the 20th century, Vladimir Putin has brought death and destruction to Ukraine, a country that has been trying to manage its geopolitical affairs in a relatively responsible manner. There can be no meaningful excuses advanced to overcome the heinous brutality of an unjust war that only the Russian president wanted. False equivalencies have no place in this discussion.

The Russian invasion of Ukraine, however, can be viewed as yet another product of the ongoing damage done when public policy is driven by political agendas adrift from critical factual and historical context. Dangerous us-versus-them narratives abound. And grievance is encouraged to fester for political gain at the expense of an analytical framework that might actually promote problem solving.

Unfortunately, the world continues to be at the mercy of marauding cold warriors seeking yet one more stage on which to play out what should have been a long-discredited geopolitical narrative and the strategic imperatives driven by that narrative. Millions of lives have been lost or destroyed in killing fields scattered across the globe whenever these warriors can find the “bad actors” essential to their mission and can unite that mission with the ceaseless mission of the arms merchants who enable them. In that world, it is mission critical that good and evil be clearly distinguished and defined in the most puerile of terms. Depth and perspective have no place in that world.

It is therefore not surprising that many of today’s international political and security challenges are generated by the conveniently sloppy use of terms like “democracy” and “autocracy” and their juxtaposition as conclusively descriptive of “good” and “evil.” However, a central problem in this equation has always been that the bombs raining from the skies are not painted different bright colors representing good and evil so that those on whom they fall can feel better or worse about the destructive impact.

The danger of binary thinking

In today’s America, no term is bandied about with less clarity and more bombast than “democracy.” America is fighting for it everywhere, trying to save it at home, and still desperately trying to squeeze the nation’s reality into a xenophobic notion of an island of exceptionalism based in the rule of law and the will of the people. With huge gaps between that reality and the dreamy, flaccid “democracy” that has proven so politically useful, there is way too much room for “autocracy” to become its similarly ill-defined opposite.

When this happens in global terms, it is so much easier to go to war, goaded on by the cold warriors and their arms merchant buddies. The Russian invasion of Ukraine and America’s collective reaction to it are just the latest manifestations of this insanity.

To be sure, America and its historical allies have, since the end of World War II, routinely applauded themselves for an international order that they created and maybe even believed would use the lessons of previous wars to achieve an international consensus that avoiding wars was a supreme, shared and worthy goal. Instead of elevating this goal and creating an equitable institutional framework for avoiding wars, wars continued to remain a critical element of the geopolitical equation.

In this context, it is much too easy to accept war as inevitable and then define the inevitable war in the same tired “good” versus “evil” terminology. Today’s war then becomes necessary or unnecessary, humane or brutal, depending upon who is fighting whom and who is seeking to assure whom of the virtue of their cause. The uncomfortable truth may be that neither the United States nor Russia, Great Britain nor China, nor almost any other nation, has ever removed war from its proverbial table of viable options in a clear-eyed way.

It is always on the table and always promoted by those claiming the mantle of “good” in its perpetual battle to defeat “evil.” Just look at how easily America and its allies have ponied up billions of dollars in weaponry to engage the battle with “evil” on the soil of Ukraine. While arming that cause will surely enrich the arms merchants and maybe “save” Ukraine, little will be said of similarly funding universal access to meaningful healthcare at home and abroad, feeding hungry children everywhere, vaccinating the unvaccinated or a host of other challenges in which the unquestionably good are engaged. And certainly not while the battle against evil “autocracies” rages on.

Weapons are no solution

America is not responsible for the carnage in Ukraine, but it is partially responsible for the promulgation and persistence of the good-versus-evil narrative at the heart of the carnage. In this instance, it is Russia that has weaponized the narrative. While it is critical that the United States step up and forcefully participate in confronting Russia’s aggression, it is equally critical that this exercise becomes a springboard to a far more advanced international metric.

To bring this analysis closer to home, substitute gun carnage in America for Russian carnage in Ukraine. While it is unclear how many Ukrainians have lost their lives over the last couple of months, it is clear that well over 40,000 people in America lost their lives to gun violence in both 2020 and 2021, just over half of which were suicides. The nation is awash in firearms.

In America’s communities, neighborhoods, schools and shopping malls, firearms are readily available and distributed to the disaffected, angry and fearful among us with little concern for the outcome. The arsenal is the nation, and it is stocked by the unregulated and unchecked greed and avarice that abounds in the nation’s democratic stew.

Contrast America’s internal arsenal and its relationship to “democracy” with the nation’s trumpeted Ukraine strategy, essentially viewing its role as that of an “arsenal of democracy.” Good for us. To the tens of thousands who have died in America from gun violence in recent years, the arsenal of democracy in our midst looks a lot like the autocrat’s gun and bullets destroying communities in Ukraine.

I do not make this point to belittle the efforts of the United States and its allies to provide the weaponry necessary to confront unjustified Russian aggression in Ukraine. Rather, I make the point to show how easy it is to confuse “good” and “evil,” and how the failure to define clear non-binary metrics for national and international problem solving only makes the problems worse.

A civilized “democracy” that seems to accept tens of thousands of unnecessary gun deaths a year can take no pride in its domestic arsenal and has to do something different about it now. In Ukraine, a civilized “democracy” that seems at the moment to yearn for an international order that can prevent bombs falling from the sky on innocent people can take pride in providing an arsenal for democracy now, but has to do something different when the dust settles. If not, any claim to the moral high ground will ring hollow.

Central to claiming the moral high ground in both instances is a recognition that arms are the problem, not the solution. To reach that lofty height, America must finally realize its potential to establish internally, and to promote externally, the institutional infrastructure, programs, and policies that prioritize the common good in terms that are easily understood.

Universal access to meaningful healthcare at home and abroad would be a good place to start. If that seems too much to ask, how about just making sure that no child anywhere goes to bed hungry.