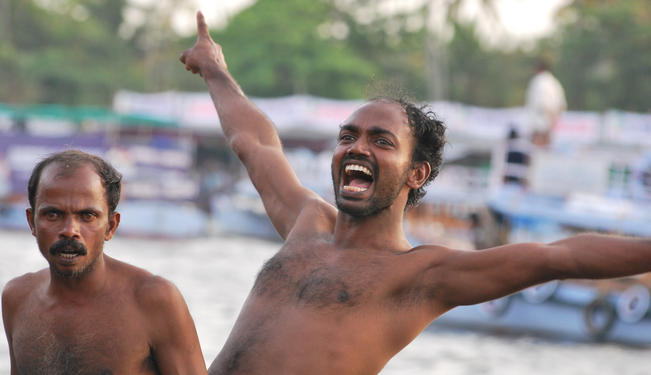 The color and vivacity of the boat races are telling characteristics of festival time in Kerela.

This argument that has often flung sports columns of newspapers and vociferous TV commentators into a verbal paranoia. The frenzied debaters need to pause, step out of their urban discontented contextualisation owned by cricket alone and re-think, or rather, travel a little more–as in some parts of India, this sounds close to mere gibberish. The unshakable focus of Kumbla buffalo riders, the vigour of camel races in Rajasthan, the sinewy arms of the oarsmen of Snake Boat Races in Kerala, the weathered but resilient legs of sixty somethings in Nagaland and the ‘kushti’(wrestling) enthusiasts of Varanasi have a different story to tell! A slow but sure sporting vitality has been brewing for decades in parts of the nation which eludes TRPs. Given this, the arguments about India being a sporting nation falls into a nebulous chasm if seen in the context of India as a whole and not solely urban India.

The famous Snake Boat Races of Kerala are the epitome of challenge and human strength in the otherwise serene backwaters. For the last 400 years, these races have not only represented a demanding sport but also united communities from villages, sans religion or caste. These legendary boats have said to have been the prime vehicles for many wars in the region. The story goes that the narrow structure of the boats made it functionally easier to manoeuvre through the network of backwaters. Each snake boat is about 90 to 100 feet long and can accommodate upto 110 people. A complete team comprises of about 100 rowers, 5 guides, a captain and a few people who set the beats for the rowers. Highly skilled craftsmen build the boat from ‘Aanjili Thadi’, a local forest wood. The ergonomics, slight nuances in shapes and structure are never given away by the master craftsmen. It takes a few focused months to build a single boat. There are about eight prominent races in Kerala and many more local events amongst villages. There are seven types of boats that appear in these races, the most popular being the Chundan Vallam or the snake boat.

Of the eight events that line the July – August season, the Nehru Snake Boat Race is the most popular event and is held on the second Saturday of August each year. Few practices are held before the race. The sponsors of the boat, often rich families of the village, have to give each of the 110 men, salaries for the days missed at work, food and the team kit. The night before the event, the participating villages put the final touches on the boat, smearing and polishing it with egg white, oil and curd. A sacrosanct ceremony, it is well guarded through the night, lest, one of the opposing teams hinder it in any way. The boats are then launched into the water in the morning amidst cheers and support from the villagers. These then arrive via the backwaters at the race day venue, the Punnamada Lake.

The liveliness at the venue is electric. Whole villages line the race track on bamboo stands built for the occasion. Every minute, a supporting group breaks into the ‘vallam kali’ traditional song amidst jeering and jibing directed at the opposing groups. Police boats ply the length of the track to keep youngsters from swimming close to the race track. The occasion is in short an opportunity to drink in true Kerala style! Entire villages arrive by afternoon in smaller boats and line up next to the tracks. This vibrant milieu of celebration, with the local toddy as a key ingredient, is a hot–spot for many photographers around the world. The energy on the day of the event is palpable. Furious cheering followed by hysterical celebrations amongst the crowds sets the backdrop to the focused rowing. Along with the Snake Boat Races, there are also races for smaller boats and women-only races as well.

Plagued by commercial viability and hefty sponsorship deals, the Nehru Boat Race is slowly losing its charm and other modest races like Aranmula and Champakulum are gaining popularity. However, there is always a cyclic allure to everything that is touched by tourism. The enthralling part is the unison of people at an athletic extravaganza and the fact that an age old sport has found its place in the present. Despite technology, modernisation, and ruthless marketing having permeated the region, the sport still primarily remains an amalgamation of sweat, honour and sinew.