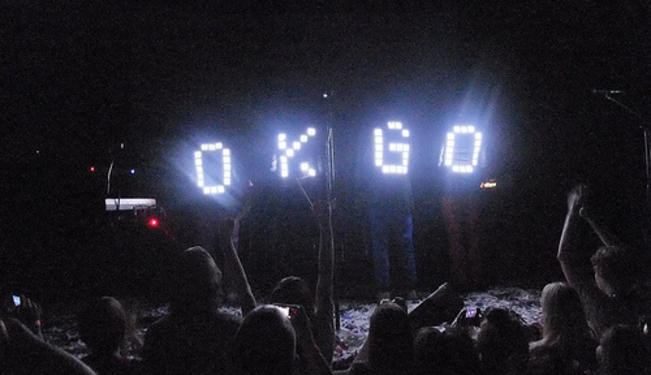 An inspection of the newest OK Go music video in terms of its artistic value and the interrelation of artwork, advertising, and new media phenomena.

On February 5, 2012, the American alternative rock band OK Go released the music video for their new single ‘Needing/Getting’. It is yet again about love and what you feel when it is lost. ‘Are you guys ready?’ asks OK Go front man Damian Kulash before the band starts to perform in the new video. It is neither an ordinary performance, nor an ordinary music video. Nor is OK Go an ordinary band.

The band, originally from Chicago, consists of lead singer Damian Kulash, guitar player Andy Ross, bass player Tim Nordwind, and drummer Dan Konopka. They had their breakthrough six years ago with the song ‘Here We Go Again’ and the corresponding video in which they performed a tremendously choreographed dance on treadmills. In 2006 they were even invited to perform live at the MTV Video Music Awards, which is quite an unusual honor for – at that point – rather unknown musicians. They accepted, and have continuously gained more fame, especially for the creative and original style that they kept up in their videos.

OK Go’s next project of note was not until 2010. That year they planned and prepared the shoot for ‘This Too Shall Pass’ in a warehouse for six months, with 60 people working on and off to make a shared vision come true.  They built a giant machine to dance with, and had fun while doing it. The video achieved over 34mn clicks on YouTube. In their behind the scenes video, Damian Kulash and the video directors stated that they used 89 mechanisms and that it took them 85 takes to make it happen. That was two years ago.

The band and producers also needed several months of planning and preparing until they finally were able to shoot the new video to ‘Needing/Getting’. ‘Needing/Getting’ was launched in early February and garnered 3.4mn clicks within two days of the release, and over 15.6mn clicks to date. This is big, but in today’s YouTube-generation it is not extraordinary. On the list of February’s most-liked music videos it comes in third (with 160,000 likes, which is almost as much as what ‘This Too Shall Pass’ got in two years). Surprisingly, this is more popular than the latest videos to the new singles by Madonna, Jay-Z, or Kanye West. But why is that?

Often, OK Go gets reduced to its great videos, and the fact that it has great musicians, often gets sidelined. Their songs are sophisticated, well written, and passionate. They sing about love, split-ups, friendship, pain, and most importantly, about having fun and enjoying life. This is what you can see in the videos. Their music carries Rock ‘n’ Roll as an Indie Pop Rock variation, into the listener’s living room, and onto stages all over the world. The band’s style is about having ideas and visions and trying to make them come true. The question with OK Go is always: What comes next?

With a huge corporate sponsorship aboard, OK Go advanced the ‘Needing/Getting’ video to a new artistic, and financial, level. As part of a campaign for a big car manufacturing company, the video can be seen as a huge marketing project. The video is introductory marketing for the car company, and is aired on occasions like the Super Bowl. No doubt, the band’s reputation is used to improve car sales. The car company’s image also improves. That is one of the main reasons for media advertising.

For the shoot over a thousand instruments were assembled somewhere in the Californian desert, and a unique car was built with crazy percussion mechanisms attached to it.  The car drives for a few miles on a track while making music with the instruments.  With regard to the artistic value of the video, OK Go once again managed to outperform themselves.

Dressed in their typical four-colored outfits, the band members sit in the car when the video commences. They start the song by slamming a car door and hitting the roof with their fists, while the blinkers indicate the rhythm. Tim Nordwind starts to pluck a little ukulele and Damian Kulash gets the car going while they start to sing along. Soon they hit the first obstacles on the road with the rods and ledges that are attached at the bottom, sides and roof of the car. The sounds created are actually recorded and used for the song’s tune. It took months of planning to get the sounds to match the instruments played in the studio-recorded version of ‘Needing/Getting’.

The design for the construction was tricky. Hitting glass bottles, pianos, barrels, and guitars in the right sequence with a car driving at 40mph is no easy feat. As the driver, Kulash had to take stunt driving lessons, which according to him were a lot of fun. It took the crew a whole weekend and a dozen takes to wrap the whole thing up. If you look at the result, you are tempted to judge the project as either a money wasting megalomania, or a new level of genius art.

Art and advertising have been closely connected for centuries now. Music is not always only about performing. Some people do it for the fame, some do it for the money and some do it mostly for the fun of it. With OK Go, it seems to be a healthy mixture of all of these things. It is no secret, that nowadays many things affecting people’s everyday lives – not just in terms of music art – can be considered economic playgrounds for the big concerns of the world. No project seems impossible in a world with economic growth and financial capitalism, and you can blame companies for spending millions of dollars for advertising products nobody really needs. However, if you got the chance to do something you really love with somebody else paying the bill, what would you do?

OK Go is ready to go and play the game. Why should they not? ‘Needing is one thing, and getting, getting’s another’, as they put it in the song. They’ve got game, they’ve got money and they’ve got the talent and skill to create great art. We will NEED to wait and see how far they can GET in the future.