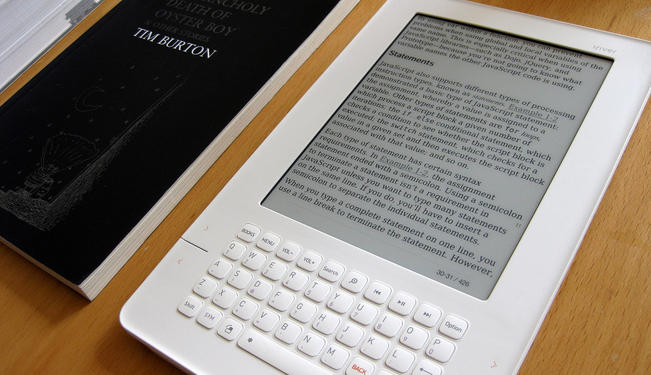 A book seems to be such a simple thing: a stack of papers, filled with words, glued together. However, everyone who has ever read a book knows that it is more than just a mere collection of letters. People use it for education, for entertainment, for distraction, for escaping reality. Displayed on a bookshelf, books are a reflection of our identity, or what we would like ourselves to be seen as. Depending on whether it’s a study book or a novel, the mere presence of a book can either foster a bad conscience or be an invitation to enter a fantasy world. But as with every medium, there are changes brought on by time and the evolution of society. Nowadays, literature is just an internet connection and a finger swipe away. E-books are the way to go for the "iPad generation".

Although the Koreans had already used movable metal letters for printing 200 years prior, the official invention of book printing is dated back to the around 1450. Johannes Gutenberg revolutionized the already existing printing methods which included stamps and wooden blocks; in these cases the layout and text of an entire page was carved into a wooden block, so you could use it as a stamp. Of course this was a very inflexible and time consuming task, especially considering the fact that an entire wooden block and days of work were useless if you made a mistake in your carvings. Gutenberg’s key achievement was combining these techniques with new printing colour and the invention of an instrument that would allow the faster production of detailed metal letters. He merged preexisting procedures into a conclusive printing system that wouldn’t change much for a long time afterwards. Consequently, if Gutenberg had walked into a book printing factory in the early 20th century, he would have still understood the processes despite the increased mechanization and efficiency of the procedure.

When you take a look at other media, it becomes even clearer how traditional books are and how they have remained relatively unchanged for over 750 years. Compared to the evolution of the TV, which only took around 90 years to go from black-and-white to HD channels and TV-on-demand, books have been very stable and resistant to societal change.

Only when the perceived value of knowledge kept increasing and many societies turned their focus from mechanical and industrial labor to information instead, books began to be re-vamped. With the development of the world wide web and communication technologies, enabling exchange of information across the world and easy data storage, there was the possibility to revolutionize the book market as well.

In 1988, the first electronic book was available for sale. It was the novel "Mona Lisa Overdrive" by William Gibson, which  could be read on a computer screen. After that, a lot of investors and product developers wanted to develop this concept further. The traditional publishing houses remained unphased by this, since they believed that traditional books as a bearer of culture and knowledge could never be replaced. And they were right: in the 1990s, electronic books were almost exclusively used in the scientific field, as the search function and skipping function of them was useful for textbooks. In 1999, the first e-book reader was released by NuvoMedia, although it didn’t enjoy any commercial success. Only 8 years later, the e-book market really gained steam with the introduction of the Amazon Kindle. Already having drastically changed the book market by making literature always available to buy, Amazon was then leading the movement of digital reading.

The question is if this “revolution” will end in the traditional book becoming extinct. Tablets and netbooks are already very present in a lot of people's lives for a variety of functions, so it follows that users might as well convert to being e-readers. Adjustable font size, huge data storage capacity and search functions make the digital reading device not only attractive for scientists and students (which were the early adapters of this innovation) but also for every technology intrigued person. And there seem to be a lot of these people around: the number of e-reader users in the US in 2011 almost doubled compared to the year before. Newspapers and magazines reacted to that trend quickly and also made their releases available digitally.

So what about the “old school” publications? Will they slowly become a thing from the past, something we will show our grandchildren as a rare relic from times gone by? There is a certain group that will surely avoid this development in the near future: haptic people. People who like the feel of a page, the smell of a freshly printed book, the firstly pristine then more and more used cover; they see reading as something that can let us escape from our screen and computer-dominated world for a while. Likewise, students will still print out studies and essays although they could just as well read them on their laptop. The benefits being that  passages can be marked,  pages physically turned and notes scribbled in. Now one might argue that you have these functions to some extent on an e-reader too but for some people it doesn’t substitute a stack of rustling and touchable paper.

Sometimes we do not want to make our lives more efficient and convenient, or want adjustable letter size and hundreds of pages compressed in a little chip. We want to have our books with us on the beach, on the train, on our shelves. We enjoy the feeling of turning the first page of a brand new publication and value the worn down copies of our favorite novel. So when we read it once again, we see that sunscreen stain on page 120 and can think of the happy times on our last holiday with our beloved story.