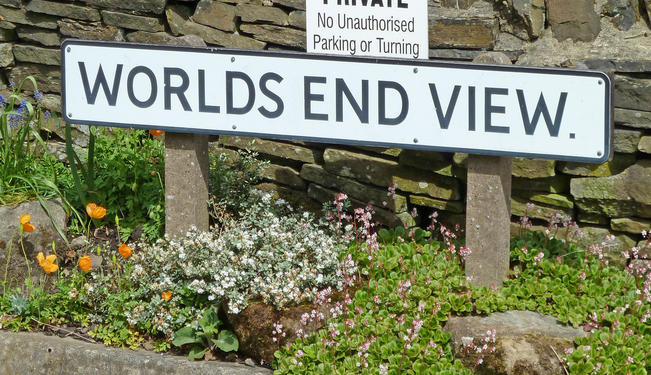 This is not the first time the world is supposed to end. Pope Silvester II predicted that doomsday would arrive on New Year’s Eve 999AD. Mass hysteria broke out among Christian believers with villages being plundered and pillaged. When the year 1000AD started without the earth falling apart and being plunged into darkness, Silvester claimed his prayers had saved human kind.

A thousand years and several failed doomsday prophecies later, there is an entire market that promises salvation and help in the case of an apocalypse: you can buy survival kits, go to seminars and learn how to live in the “new” world afterwards, purchase books, DVDs, coffee mugs, magazines, T-shirts and even iPhone Apps. The industry behind this is making use of a sociological concept which proves the great effect of human awareness on reality: the self-fulfilling prophecy.

The term was formed by Robert K. Merton, who tried to explore the influence of forecasts and prediction on human behavior. His assumption is built on the Thomas theorem (“If men define situations as real, they are real in their consequences.”). The theory claims that our decisions and conduct are greatly affected by our presumptions about future events.

One example is the toilet paper panic during the oil crisis of 1973. Due to a statement by Johnny Carson on the Tonight Show, that the US was not importing enough toilet paper for the country’s demands, many Americans stocked up on the rare seeming good and in doing so caused a shortage which otherwise wouldn’t have occurred.

This obviously failed attempt at humor had a sizeable impact on the economic behavior of people and demonstrates how much we let our beliefs of what we assume will happen influence reality. So if someone believes that on December, 21st 2012 the world could come to an end, it will definitely alter his conduct. The actions don’t have to be as drastic as stocking up on canned food and buying a radiometer for the post-apocalyptic wasteland. Before we actually take actions due to a prediction, our mind has to convince us that we really need to prepare for some future event. To transmit thoughts and opinions into behavior, the brain is reinforcing certain ideas.

Selective perception usually has the purpose of not overloading the brain with too much useless information. Whereas this function keeps us from going crazy due to too many stimuli, it does have a downside. Always assigning new information to already existing patterns that fit our worldview creates a bias towards everything that supports our ideas. In the example of doomsday predictions, if we hear something about thousands of birds falling down dead from the sky on New Year’s Eve 2011, we are more likely to ascribe it to the start of the doomed year 2012 than to natural causes. This is what many people did concerning the bird deaths in Arkansas and Louisiana last year, providing fuel for doomsday conspiracies and the industry that goes with it. But how did people all over the world find out about this happening?

As with the toilet paper shortage, media outlets were responsible for making this incidence known to the public. As the media is an information processing system just like the human brain, there apply certain selectivity rules as well: not every event in the world can be converted into news; there are just too many of them. The difference between the selective perception of humans and the media’s “news sorting” is the voluntariness. Most of the selecting of information in the human brain is done automatically and subconsciously. The media system on the other hand specifically chooses certain incidents and topics to report and make the public aware of. The “newsworthiness” of an event is determined by a list of characteristics which was established by the media system

What exactly these criteria are was researched frequently over the years. The most known concept was described by the Norwegian scientists Johan Galtung and Mari Holmboe Ruge, who created a set of 12 “news value” characteristics in the 1960s; characteristics such as negativity or proximity to elite nations. This means that someone saving a child from drowning will not be labeled as interesting as a murder. Drastically put: reporting about the signs of the end of the world is much more profitable than publishing a positive prognosis for the upcoming year.

This trend towards negative news coverage – combined with the fact that people gain the vast majority of their information from the media – can create fear-driven behaviors that seem to fly in the face of reason or at least lack any scientific evidence. In the case of doomsday 2012, the message led to public worries causing a couple of people to even spend large amounts of money in search of an effective remedy against the world’s end. Reinforced through updates permanently spread by the media and also movies like “2012 Doomsday” by Nick Everhart, the apocalyptic panic gains currency and nurtures an industry of people trying to exploit this by offering products said to ensure your suvival.

The hype surrounding such events affects some people not only mentally and behaviorally but also economically. Taking into account that most people would probably not have been aware about the doomsday prediction if the media had ignored this story, it can be seen that society is highly dependent on the media’s selectivity rules – up until the point of creating a self-fulfilling prophecy on a large scale.