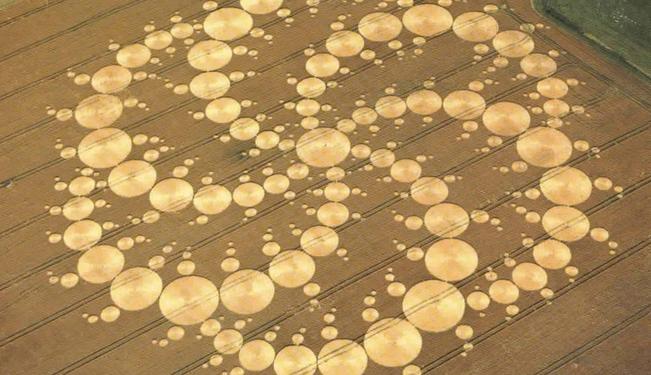 Crop circles, more than anything else, are land art pieces.

Crop circles: the infamous and strange formations created on crop fields, where wheat or maize is taken to a new level of existence. All around the world, these mysterious formations make their debut. England, however, is where the phenomenon has its major platform. Some even call the county Wiltshire in south England the Mecca of crop circles. Usually they appear in fields which are close to ancient monuments like Stonehenge. Allegedly, there are reports of crop circles dating back to 1678, but no one really knows when these formations started to appear. What is certain is that they developed into a worldwide phenomenon in the 1970s.

Immediately one is prompted to ask who made these things and what they really are. Are they simply hoaxes? Messages from extraterrestrials? A network of Earth’s energy “spots” that rests on sacred geometry?

Many do believe that these formations are alien-made or that they represent messages from the Earth itself. The new age movements are particularly keen on this idea. The complexity and size of the formations as well as the heavy symbolic nature they display play the fundamental role in such interpretations. However, there are others who criticize these beliefs, claiming it is precisely because of this that the formations are created – to propagate new age ideologies. Even if not intended for such a goal, they are man-made and do not involve any kind of other-worldly beings. The argument is that like every other type of artwork: there is an “ego” behind the complexity of the works which rejoices in the accomplishment. They may stay behind the scenes but the ego is clearly a sign that no extraterrestrial activity is involved.

The debate between believers and non-believers hardened when in 1991, Doug Bower and Dave Chorley reported they were responsible for the crop circles. Despite such a claim many were not convinced of this. Most of its shrouding mystery is related to aspects which are very difficult to explain. The “hoaxers” tried to exemplify how a circle could be made using only a rope and a plank of wood. But in the formations, crop stalks appear not to be broken, but merely flattened, bent at 90 degree angles. Moreover, scientific evidence has also shown that the cellular structure and the soil chemistry are both changed by the formations. This has caught the attention of some scientists who have tried to understand how the crop circles are done. Richard Taylor, director of the Materials Science Institute at the University of Oregon affirmed that it is most probable that crop circle makers use GPS, lasers and microwaves. Indeed, several analyses showed that the stalks seemed to be microwaved and a mere plank of wood does not seem capable of producing such results.

Yet it is precisely this fierce debate that has made crop circles widely known about. Interestingly, in the case of crop circles, the hoaxes are not hoodwinking us by presenting a fake as something genuine. The hoaxes are actually copying something which we don’t know the origins of. How do we define the “real thing”? This is a term used by the other-worldly theorists to criticize hoaxers. The relationship between believers and hoaxers is actually a symbiotic one. For those who create the formations, there’s nothing better than a flair of mystery to advertise their work. Likewise, those who believe in some sort of other-worldly influence also need the so-called “man-made” circles. This is a way to support the claim that some of the crop circles were made with technology that the hoaxers do not possess, thus distinguishing the “man-made” from the unexplained.

Of course, beyond believers and non-believers, there is one group which seems satisfied with the phenomenon, regardless of who or what is really responsible: farmers. The pieces attract tourists, specifically new age tourists. Helicopter tours, t-shirts, donations or small fees infuse money into the county’s economy. This is certainly more than a normal crop would provide for farmers and the local community. Everyone seems to profit.

But let us absolve ourselves from the “who is who”, the “who did and who didn’t” conundrum. Let us take the formations for what they really are. Above all, these formations are land art pieces and magnificent ones at that. Their framework is the human imaginarium par excellence; the representation of the relationship between man and the unknown. The scale, the mystery and, more importantly, the scientific discourse involved has a magical aura.

Like land art, not only is the museum left behind but there is a ritual involved. The “journey” is an extremely significant part of this ritual. Most land art pieces lie in the middle of deserts, vast areas which are difficult to access. Although south England may not be the same as a desert in Utah, people nevertheless travel miles and miles just to visit a corn field. The reason for doing this, as with the majority of land art pieces, is to fulfill an expectation. You need to see it with your own eyes. Entangled in a game of mystery and awe, science becomes enchanting and art a mathematical piece of evidence of the unexplainable.

The riddle and even the expectation of an epiphany all catalyze the spirit. It is the puzzling nature of the circles that creates such feeling of the sublime. It is the experience of the elusive in itself and the ineffable as itself which lies at the center of this kind of art. The “aura”, to use a Benjamin concept, of the crop circles awakens an ancient relationship between the beholder and its environment. The world appears in all its magnitude, as the cosmos, as opposed to the mere visual immediacy with no riddle that we are used to, with nothing to reach beyond.

There is no need for any Occam’s razor here. The makers of the circles, whoever or whatever they are, are artists. Geometry is their pencil, the “what if” their ideology, while the earth provides the canvas. 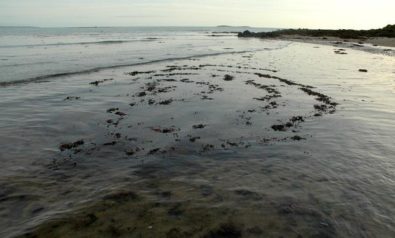 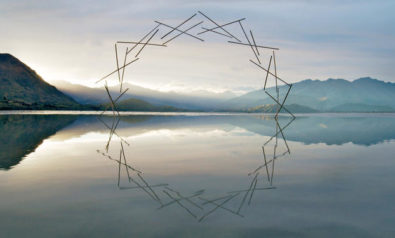 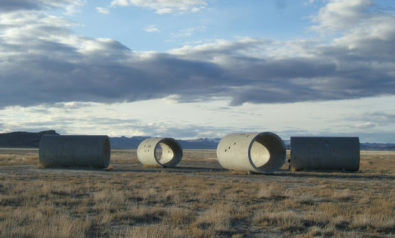 Land Art: the Celebration of Space