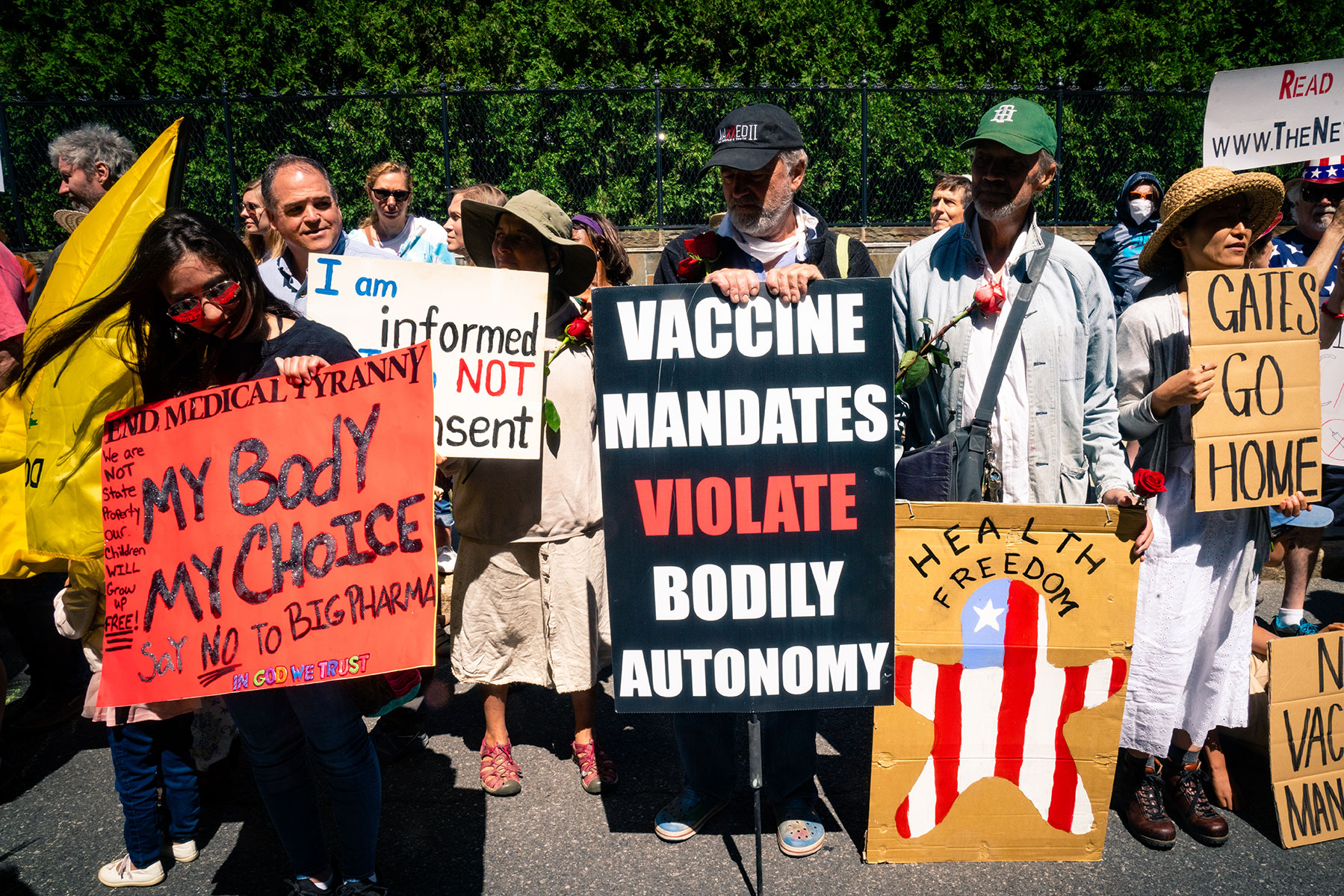 Religious groups and alternative medicine advocates have always been resistant to vaccines. But in the current COVID-19 anti-vaccination movement, they have mutated into variants of the far right in a violent mush of anti-establishment conspiracies, white supremacy and anti-Semitism.

Religion has always played a role in low vaccination rates. A 2015 literature review on religious barriers to measles vaccination that examined major religious groups around the world — Judaism, Hinduism, Christianity, Roman Catholicism, Protestant Christianity, Amish, Jehovah’s Witnesses and Islam — found that, although there are always social determinants that explain religious objections, there were also specific issues such as the possible use of aborted human fetus tissue in the making of the vaccine (Christian, Roman Catholic) or the use of animal-based gelatins (pork and cow for Islam, Judaism and Hinduism).

The Colorful World of Coronavirus Conspiracies

The alternative medicine/wellness crowd became another predictor of low vaccination when Andrew Wakefield’s 1998 paper in The Lancet sparked an international wave of vaccine hesitancy at a time when vaccination drives had achieved the eradication of several deadly diseases around the world. Wakefield’s scientific deception is skillfully summarized in Brian Deer’s “The Doctor Who Fooled the World,” where conflicts of interest (Wakefield had filed his own single measles vaccine patent before publishing this research) and reports of abuse (invasive and unnecessary tests on autistic and neurodivergent children) are documented.

Wakefield’s now-discredited publication, which connected the MMR (measles, mumps, rubella) vaccine to gut inflammation and falsely correlated it with a diagnosis of autism, effectively launched the modern reincarnation of the anti-vaccination movement.

Contrary to the vaccine hesitancy among religious communities, alt-medicine groups have managed to monetize their opposition to vaccination. A report by the Center for Countering Digital Hate (CCDH) estimates that the anti-vax media complex is big business, with estimated annual profits at around $36 million, based on publicly available data.

Some of the leading figures in the business earn six-figure salaries (Robert F. Kennedy Jr. earns $255,000 a year as the chairman of Children’s Health Defense). Anti-Vax groups also applied and received more than $1.5 million in loans from the federal Paycheck Protection Program in the US to help them to survive a pandemic they questioned.

More disturbingly, the CCDH report estimates that anti-vaccination-related traffic is extremely valuable for Big Tech, worth estimated at around $1.1 billion. An analysis of vaccine-related Facebook ads showed that the majority of anti-vax advertisement is funded by two campaigners, Robert F. Kennedy Jr. and Larry Cook.

Before the pandemic, anti-vax groups were a public health concern in terms of various measles outbreaks that became more frequent since the early 2000s. However, once the anti-mask protests of 2020 evolved into the anti-vaccination protests of 2021, the far right has managed to successfully groom traditional anti-vax communities, turning a public health concern into a political problem of far-right extremism.

This anti-vax, anti-government, far-right nationalist protest medley is evident anywhere from Canada to Australia, where COVID-19 anti-lockdown protests have turned to violence and conspiracy-driven anti-Semitism. In France, the ubiquitous yellow stars used by protesters to denote unvaccinated status became a stark reminder of how the pain of Holocaust survivors can be easily appropriated.

Similarly, the Freedom Sweden movement has used opposition to the relatively mild COVID-19 restrictions in the country as a vehicle for anti-Semitic and radical-right extremism. In both Greece and Cyprus, where a SafePass — proof of vaccination or a negative test — is required to enter any commercial or public space, large anti-vax protests turned violent, in the case of Cyprus attempting to burn down a TV station.

Some evidence suggests astroturfing behind these protests: a German group, the Free Citizens of Kassel, seems to be behind the “World Wide Rallies for Freedom” organized since March 2021 in all corners of the world, even in tiny countries such as Cyprus and Luxembourg, using the hashtag #WewillALLbethere.

Another German movement promoting anti-vax conspiracy theories is called Querdenken, which translates as “lateral thinking.” It is now banned by Facebook and it has been linked to the far-right Alternative for Germany party. According to some reports, Querdenken has managed to infiltrate teenagers’ social media channels and successfully spread COVID-19 misinformation and conspiracy theories.

Religious symbols at these anti-vax rallies, however, reveal that their message is not only about religion. Behind the bizarre circulation of the “Vaccinated by the Lord” card is the fact that Christian symbolism is simply the metaphor, not the substance, in demonstrating against a “satanic” vaccine or an oppressive government that will lead to the “apocalypse.” The history of Christian thought and scientific consensus is much more complicated than simple refusal. In fact, Christian religious leaders in the US have publicly supported vaccinations despite debates on the use of fetal cells for research.

Among US Christian groups, white evangelicals represent the largest block in anti-vaccination ideology. Although they may use the Bible as a source of vaccine hesitancy, more often they resort to a rhetoric of condemnation toward the “global elites” that resembles the anti-establishment language of right-wing extremism.

In Greece, countrywide anti-vaccination protesters brandished Greek flags, big Greek Orthodox crosses and chants of the national anthem and “Christ Has Risen.” At the same time, priests and monks marched alongside Golden Dawn followers who brought their neo-Nazi arguments to the anti-vax demonstration. During one of these protests, Elias Kassidiaris, a former Golden Dawn MP, joined the protesters from prison via phone. All of these phenomena beg the question of how much the seemingly religion-inspired anti-vax movement is another expression of Christianism.

The term “conspirituality” was coined in 2011 by Charlotte Ward and David Voas to signify a productive merging of the mostly male-dominated world of conspiracy theories with the feminine New Age spiritual wave. The term has since taken on and found a revived relevance during the current pandemic. The Conspirituality podcast, launched in May 2020, has been a brilliant weekly take on the “converging right-wing conspiracy theories and faux-progressive wellness utopianism.”

The phenomenon is directly relevant to the alt-medicine crowd that has always emphasized the idea of one’s sovereign, meditative body that exerts control over its immune system and is impervious to the replication of the virus.

The main message throughout the pandemic has been to question the scientific existence of COVID-19 — for example, Kelly Brogan’s Questioning Covid website — but also to interpret the pandemic through the concept of “the great reset,” which Brogan’s partner, Sayer Ji, explains as “Tyranny. Technocracy. Experimental Jabs.” It is a form of neoliberal spirituality that places emphasis on individual responsibility and deflects from the role of public health research.

But the synergies between those spreading “medical freedom” and the far-right crowds should not be underestimated. One of the leading entrepreneurs of the anti-vaccination movement, Del Bigtree, spoke at the January 6 “MAGA Freedom Rally D.C.” just a block from the US Capitol. The creator of the Facebook group “Stop Mandatory Vaccination” Larry Cook also launched the YouTube channel, “Medical Freedom Patriots,” describing it as pro-God, pro-Trump, anti-vaccine and QAnon-friendly.

The Bollingers, an anti-vax couple with a large social media following and even larger revenues, founded the United Medical Freedom Super PAC that campaigned against vaccination during the 2020 election. Sherri Tenpenny, a trained physician who advocates against vaccination, is an adviser to Mike Lindell and a promoter of the so-called “election fraud” debate in the US.

In many ways, COVID-19 has made possible a backslide from the alt-medicine to the alt-right: your yoga teacher, organic food guru and meditation partner who advised you on how to keep your immune system strong in order to avoid vaccines is now talking about the government’s plan to microchip you to facilitate the trafficking of young children.

In effect, the far right has hijacked the leftist side of the anti-vax movement through a shared anti-establishment stance. As Andreas Önnerfors has pointed out, these anti-vaccination protests represent a toxic realignment of the left (green/progressive/liberal) with the socially conservative right.

The Strategic Advisory Group of Experts on Immunization defines vaccine hesitancy as “delay in acceptance or refusal of vaccines despite availability of vaccine services.” It notes that it is a complex societal and cultural phenomenon related to three factors: complacency, convenience and confidence. This largely psychological approach, however, misses the political dimension of anti-vax ideology.

Currently, the challenge is to understand how reasonable fears and valid questions surrounding vaccination mutate into radical and extremist anti-democratic ideology. Part of the explanation is how narratives of anti-vaccine disinformation have succeeded in appropriating anti-establishment sentiments. A recent study by PERIL analyzed narrative tropes and rhetorical strategies in anti-vax platforms and found that the narrative of “corrupt elites” and the strategy of appealing to the vulnerability of children were most frequently used.

As Mark Davis argues, even before the current pandemic, anti-vaccination websites employed oppositional and antagonistic strategies to produce an anti-public discourse that mostly resembles white supremacist, alt-right and conspiracy forums.

The COVID-19 pandemic has revealed that vaccine hesitancy is not just about the vaccine. It showcases the algorithmic traction of the antagonistic discourse on social media that shuts down arguments with a concern for the “ordinary” people or “defenseless” children. Ultimately, it is about mistrust of authority, the specter of corrupted elites and a misplaced desire for freedom and choice.