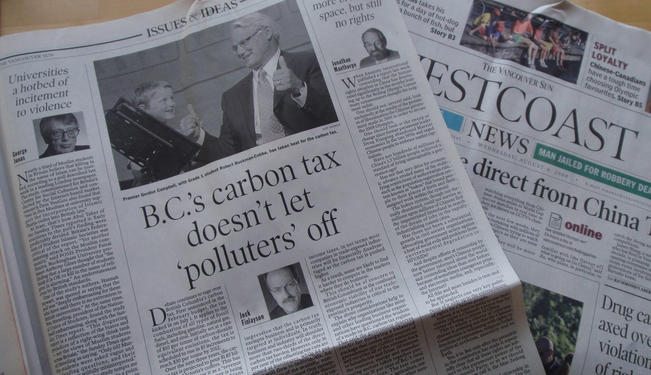 Two great tastes often taste great together. Chocolate and peanut butter. Oreos and milk. Popcorn and butter. Could the same be true of carbon taxes and corporate tax reform? Done right, each could be flavorful. But would they be even tastier together?

My Tax Policy Center colleague Eric Toder and I explore that question in a new paper. We find that using a carbon tax to help pay for corporate tax reform has several attractions and one big drawback. A well-designed tax swap could combat climate change, make our corporate tax system more competitive, and reduce long-term deficits; but would be quite regressive, increasing tax burdens on most Americans while cutting them on those with the highest incomes.

Let’s start with the good news. Putting a price on carbon dioxide and other greenhouse gases would be an efficient way to reduce future emissions, encourage greener technologies, and reduce future risks of climate change. A carbon tax would make real the adage that you should tax things that you don’t want – like pollution – rather than things you do.

A carbon tax could also raise substantial revenue. One common proposal, a $20 per ton tax rising at 5.6 percent annually, would raise north of $1 trillion over ten years. That money could help reduce future deficits, pay for offsetting tax cuts, or a combination of both.

Which brings us to corporate reform. Just about everyone wants to cut America’s corporate tax rate, now the highest in the developed world. President Barack Obama wants to lower the federal rate from 35 percent to 28 percent. Many Republicans, including House Ways and Means Chairman Dave Camp, hope to get down to 25 percent or even lower. But they are all having a hard time finding a way to pay for such rate cuts. It’s easy to talk about closing “loopholes” and “special interest” tax breaks in the abstract, but in practice it’s difficult to cut back enough to make such large rate cuts.

Enter the carbon tax. A reasonable levy could easily pay for cutting the corporate tax rate to 28 percent or even lower. In fact, such rate cuts would require only a fraction of carbon revenues if lawmakers also identify some significant tax breaks to go after. The remaining carbon revenues could then finance deficit reduction or other policies.

Cutting the corporate tax rate would boost the US economy, reduce many distortions in our existing code, and weaken multinationals’ incentives to play accounting games to avoid US taxes. The resulting economic gains might even be enough to offset the economic costs of the carbon tax. That’s a tasty recipe.

Except for one missing ingredient: fairness. Like other consumption taxes, a carbon tax would fall disproportionately on low-income families. Cutting corporate income taxes, on the other hand, would disproportionately benefit those with higher incomes. A carbon-for-corporate tax swap would thus be quite regressive.

Eric and I used TPC’s tax model to measure this regressivity for a stylized carbon tax that would raise revenues equal to 1 percent of American’s pre-tax income. As illustrated by the light blue bars in the chart below, that carbon tax would boost taxes by more than 1 percent of pre-tax income for households in the bottom four income quintiles — 1.8 percent, for example, in the lowest fifth of the income distribution. The increase would be smaller at higher incomes. Folks with the highest incomes would bear a significantly lower relative burden — just 0.75 percent of their pre-tax income, for the top 20 percent of households.