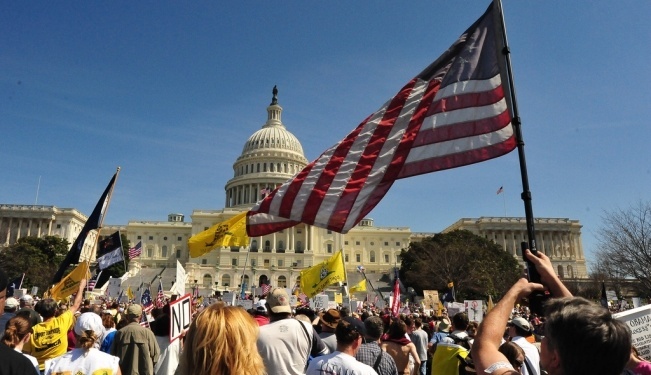 Since 2009, few phenomena have transformed American politics and transfixed pundits as much as the Tea Party movement. The political right has praised the movement as a return to principles of small government and a fresh direction for a troubled Republican Party.  The left has vilified the Tea Party as ignorant and often bigoted.  A reasoned analysis yields a more accurate picture. The movement does have a racist fringe, but its focus is primarily economic.  Although the movement has claimed a scattering of electoral victories, the uncompromising nature of its adherents has hindered more than helped the Republican Party.  Furthermore, the Tea Party’s ideological rigidity risks further damage to an American economic recovery. Its further influence bodes well for neither Republicans nor American policymaking.

A discussion of the Tea Party must begin with its origin. This question is far from straightforward; the movement boasts many different beginnings from the views of its membership.  Its earliest stirrings can likely be traced to the success of libertarian-leaning Ron Paul in the 2008 Republican presidential primary. While Paul’s supporters proved more passionate than numerous, they helped ignite protest against October 2008’s financial crisis and costly government response. The movement had spread across the country by February 2009, further bolstered by Democrats’ much-maligned efforts to reform health insurance regulation. Although initially dismissed by Democratic lawmakers, the movement proved widespread and enduring.  By July 2010, Gallup found that nearly 30 percent of Americans reported affiliation with the Tea Party’s fiscally conservative platform.

The platform has been obscured by frequent and sensationalized media coverage. Left-leaning commentators have recast isolated incidents of racism to represent the face of the movement, overshadowing its economic orientation and purpose.  Other reports have overzealously linked the Tea Party with Birther activism, a separate movement that has been commonly repudiated by Tea Party members themselves.  Nevertheless, these portrayals have taken their toll. A May 2010 survey by ABC News found that 57% of Americans critical of the Tea Party suspected its members of racial prejudice;24% of neutral observers believed the same.

While some Tea Party affiliates hold unabashedly bigoted views, they are not representative of the movement as a whole. According to an April 2010 Gallup study, Tea Party members are more likely to be male, white, and have a greater income than the average voter,  but not appreciably more than the average Republican.  Black Republican candidate Hermann Cain’s first-place victory in a February 2011 Tea Party straw poll similarly undermines accusations of institutional racism.  Bigoted beliefs (typically the domain of extreme conservatives) may predict Tea Party membership, but such membership is not itself a predictor of bigotry.  The Tea Party encompasses a wide umbrella of views united by libertarian sympathy, not racist sentiment.  Liberal commentators have done the movement a disservice by suggesting otherwise.

Mixed success at the polls

A common Tea Party refrain cites how its activists swept the 2010 midterm elections and won a Republican Congress.  Massachusetts Republican Scott Brown’s surprising triumph in a January 2010 special Senate election was the first major victory attributed to Tea Party influence, and it was not the last. Republicans’ The gain of 54 House seats (the largest since 1938) in November 2010demonstrated Tea Party appeal, while the successes of arch-conservatives like Rand Paul and Marco Rubio attested to the movement’s passion.  In a New York Times exit poll, four in ten voters fully expressed Tea Party support. It was a remarkable showing for a young political movement.

It was also a showing that masked other, less flattering realities.  While the Tea Party has propelled several candidates to victory, it has also stunted the candidacies of others. Often, Tea Party voters did not unseat Democrats—they simply replaced moderate Republican politicians with more conservative ones.  In two high-profile instances— a Delaware Senate race and the New York governorship—Tea Party-backed candidates proved toxic enough to lose what had been considered easy Republican victories.  Other cases saw the movement launch third-party spoiler candidates, splitting the Republican vote and ceding right-leaning districts to unlikely Democratic representation. This most recently occurred in a May 2011 special election for New York’s 26th district, leading to widespread acrimony among the conservative camp.  While the Tea Party has shown great political potency, it has proven more of a mixed blessing than a silver bullet.

Although the Tea Party has played an appreciable role in recent American politics, questions regarding its future have become increasingly important.  In March 2011, Gallup found 47% of Americans held an unfavorable view of the movement, including 29% of self-identified conservatives.  These numbers reflect a downward trend in support.  Nonetheless, July negotiations concerning the U.S. government’s debt ceiling and long term deficit reduction have been heavily influenced by Tea Party activists’ refusal to permit the levying of any new revenue under any conditions. Many House Republicans toed this line firmly, frustrating party leaders and endangering a speedy resolution to the crisis. The Tea Party’s national popularity may be waning, but its influence now permeates core Republican constituencies.

This does not augur well for the immediate fate of the Republican Party.  While the Tea Party’s emergence has helped realign focus from social issues (long a losing conservative domain) to more relevant economic ones, it has also accelerated a rightward shift that threatens to squeeze out moderate Republicans entirely.  The same holds true for government-oriented neoconservatives, a group fallen out of Republican favor but not out of the party itself.  Consequently, Republicans are more internally divided than any point in the last two decades.  In May 2011, Gallup found that fully 52% of Republicans approved of the idea of a new third party. Until these deep political divisions are reconciled, the potential of Tea Party activism will remain stymied at the polls.  Yet should the Tea Party fully infiltrate the Republican base, it will further exacerbate America’s already considerable partisan divide.

Such an outcome may hinder America’s financial recovery.  It is one thing to have a party influenced by hard-liners; it is another thing entirely to have a party chained to economic ideologues.  Tea Party prescriptions, safe in small doses, cannot be relied upon to single-handedly right the world’s largest economy.  This is a truth attested by global economists and demonstrated by Tea Party politicians’ recent willingness to default on the national debt. The Economist, hardly a champion of the left, said, “The vast majority of Republicans, driven on by the wilder-eyed members of their party…are clinging to the position that not a single cent of deficit reduction must come from a higher tax take.  This is economically illiterate and disgracefully cynical.” Should Tea Party influence grow, these impasses will only become more common.

Ultimately, an examination of the Tea Party’s meteoric rise and eventful life reveals a movement misunderstood by both its critics and adherents.  Liberals have been too quick to saddle the Tea Party with bigoted beliefs, failing to appreciate its fundamentally economic orientation.  Meanwhile, Tea Party activists have greatly exaggerated their movement’s political utility, overlooking instances in which it has contravened broader Republican goals.  These misconceptions are important because of the role the Tea Party has taken in determining the future of both the Republican coalition and America’s economic recovery.  It is a role that has become increasingly significant— and a role that ultimately bodes to be more detrimental than beneficial.