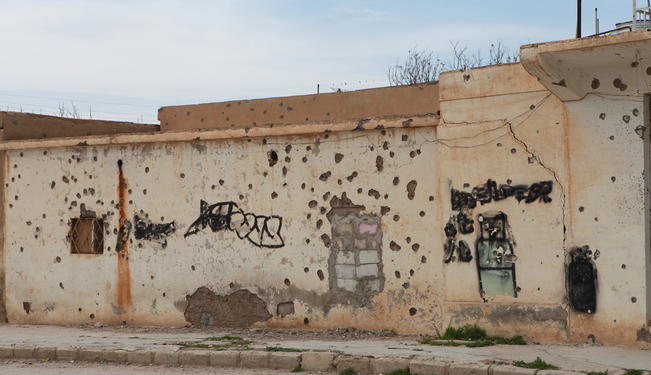 Too many Syrians have been killed for a deal to contain chemical weapons.

Quite apart from the current fury in the West over the use of chemical weapons by Bashar al-Assad, the Syrian Civil War has been the latest chapter in the continual collapse of ersatz national sovereignties in the Middle East since the notion of the nation-state was first imposed upon them a hundred years ago. In a political rendition of "if the right fist don't get you, the left one will," the eminent transnational forces of Islam and Facebook have taken to leap prescribed country borders in a single bound. All this while Big Oil still maintains a series of overweight marionettes in the Gulf to fuel a still ravenous industrial world.

The recent images of US Secretary of State John Kerry and Russian Foreign Minister Sergey Lavrov in Geneva deciding the fate of the Assad regime is redolent of the Paris Peace Conference following WWI when Britain and France decided on who got what real estate in the Middle East. One has to wonder how the architects of the Arab Awakening view today's photos. Surely, with great pain.

So, where does this lead us? Syrians – as Tunisians, Egyptians and Yemenis did earlier – lost their fear of tyranny in March 2011 when the people of Dara'a revolted. Have no doubt, no matter the cost, Syrians will have some shade of participatory governance and that will mean that the Sunni majority will eventually take a leadership role.

It makes little difference to them that the tyrant may have his chemical weapons confiscated, as he kills them just as quickly with his air force and armored divisions. 100,000 dead. Too late now ever to put Humpty together again. Inevitably, Assad will go down at the hands of its citizens. Either that or preside over a much smaller part of Syria.

Chemical weapons or not, the forecast remains: partition in Syria; Syria, in the main, as Sunni; Hezbollah diminished; Lebanon disturbed further by Christian and Shi’a refugees; Saudi and Turkish influence enhanced; the substitution of America's hard power with soft power as a changing paradigm for its foreign relations unless, of course, Israel and the Strait of Hormuz are threatened and then its terrible swift sword gets unsheathed.

And, as for Russia, beyond its continuing grasp on its port in Tartus, even as it struts and touts its inclusion in the photo, it is belittled. It has failed to read the tide in the Arab world and especially of its "generation next." Its photo is and will be remembered as that of a petro state with its own rendition of a caped crusader keeping fast company in the public limelight with a Middle East tyrant of Frankenstein proportions.

America at this time and place will be remembered as almost Hamlet-like in its policy meanderings, but still and all, vaguely and certainly inconsistently, on the side of citizen empowerment.