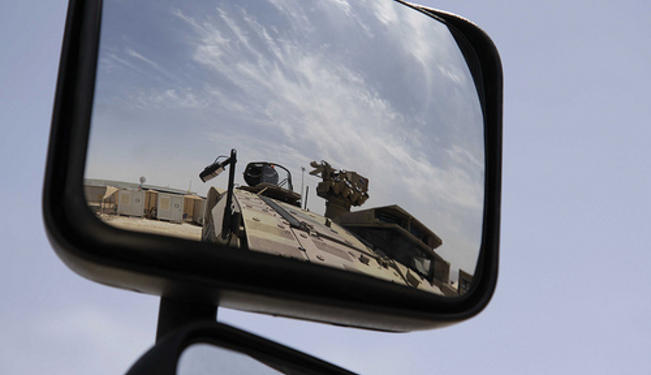 From the day-to-day to the social and economic, Nanette K. Pawelek delivers an on the ground view of life on US and NATO operated bases in Afghanistan. This is the final part. Read part 1 here.

Kandahar Airfield (KAF) remains an intricate web of fascinating experiences, and clearly there is much more to KAF than I can relate in the scope of this article. Interestingly, a member of the US Air Force created quite a telling, yet succinct, visual chronicle of KAF’s highlights. Although a bit nationalistic in nature, his YouTube video “Kandahar the Song” effectively presents numerous points of interest specific to this curious place.

By extension, Josh Kramer’s blog, “Transcredible Exploits,” provides a uniquely social and philosophical vantage point of KAF. Kramer, a civilian who worked at the Kandahar Education Center, integrates his own personal and professional experiences as he catalogues the mundane and the obscure at KAF. Kramer’s photographs, in tandem with his poignant, yet often comical episodic narratives, illuminate the ordinary and extraordinary practices of deployment life.

Although I spent most of my time in Afghanistan at Kandahar Airfield, I also had the unique privilege of teaching US troops at Camp Marmal. Located in northern Afghanistan in Mazar-e-Sharif, Camp Marmal is often referred to as MES. Nestled near the steep drop-offs and jagged edges of the Hindu Kush mountains, it proved to be quite different from KAF. Although smaller than KAF, MES is deemed large enough to be a major hub for supply and operational movements in Afghanistan. As nations streamline and downsize troop levels, MES continues its transformation toward a more strategic center for Coalition Forces’ logistics and outfitting efforts.

The German forces largely command Camp Marmal and run a structured and orderly camp. The base topography includes many neatly paved roads, curbs, sidewalks, and efficient irrigation and rain ditches, which is quite uncommon for even established bases in Afghanistan. The air quality at Camp Marmal far surpasses that in Kandahar, unless one is caught in the middle of a rare dust storm. The residents of the camp frequently comment on the picturesque mountain peaks. Indeed, it is not uncommon to appreciate an unblemished view of the nearby mountains and breathe clean air while jogging along the base perimeter.

To some, the best part of Camp Marmal is that it has not received indirect fire in years and feels much quieter than other bases in Afghanistan. While rocket attacks were a regular part of my Kandahar experience, Camp Marmal received zero rocket attacks while I was there. MES also had fewer fighter jets, making Camp Marmal feel tranquil and almost “peaceful.” While outside the wire may prove different, because that it is often the case in various provinces throughout Afghanistan collectively, the Mazar-e-Sharif area is calmer than places like Kandahar. Some NATO civilians even live in the inner city of Mazar-e-Sharif and have done so for years now.

While I did not live outside the base at any time, I lived in one of the many large tents that sheltered approximately ten bunk beds. Civilians were grouped with civilians (in all female or in all male tents), and US military members bunked with other US military members. Some of my students told me that they lived 20 to a tent, but the tent I was assigned to accommodated 10 women. Troops and civilians alike delineated their space and attempted a fraction of privacy by fastening extra sheets or blankets to the top bunk mattresses.

At “lights out,” it was everyone’s goal to achieve a strategic position on his or her own mattress in order to avoid the numerous prodding springs. The more seasoned combat veterans who attended my classes smirked when younger service members complained about the condition of the mattresses. Those who had been deployed before to more violent and active areas of Afghanistan often echoed the same sarcastic comment, “Well, war is hell now isn’t it?” Conversely, many NATO forces lived in containerized housing units with two to three people per room or in a more sophisticated tent with built-in individualized demarcated spaces, and all slept on form-fitting foam mattresses.

Currently, Camp Marmal is split into two main sections that a co-worker and I named, “Europe” and “America.” One half of the base is saturated with US forces, including an American PX, Green Beans Coffee, a Pizza Hut, and a Burger King, while militaries from countries such as Germany, Finland, Sweden, Norway, Spain, Holland, Hungary, Turkey, Montenegro, Bosnia, Kosovo, Mongolia, and others, reside across a few iron gates from the US area.

European and NATO forces live and operate near the German-run hospital and the delicious German dining facility (DFAC) that serves some of the best tasting food I ate while in theater. Most US service members I spoke with shared this point of view, whereas many of the German troops I conversed with claimed that the German food was not quite “German” enough and instead frequented the American DFAC that typically served a larger selection of foods and certainly more fried food than the German DFAC.

Comprehensively, Camp Marmal contains more stable and fortified buildings than I witnessed at KAF. The “Atrium,” a rectangular brick structure located in the German portion of the base, includes a German style restaurant, a gym, and a few separate cafes, one of which has a pool table and foosball table, while another contains a few couches and a small library. Several tables, chairs, and a few benches populate the inner area of the Atrium, which transforms into quite the social scene in the evenings. On the “weekends” (if there is such a thing when most individuals on base work seven days a week) and for special events, the Atrium’s café spaces change into open areas for music and dance gatherings.

Whether occupational, logistical, or recreational in nature, KAF and MES possessed particular similarities, and although I inhabited merely two NATO bases in Afghanistan, my observations and encounters reveal how different spaces of war and modes of operating in theater can be.

In September 2011, I had boarded a US military aircraft with American troops, excited about teaching undergraduate courses to service members. In May 2012, I left Afghanistan on a hefty German cargo plane full of German Bundeswehr troops and a wealth of unique contemporary historical experiences. Inevitably there is more to say about the nine and half months I resided in Afghanistan and about the intricacies of the situations and people I encountered, but arguably, the people I met along the way and the day-to-day circumstances shaped and continue to re-shape my response to, “So, what is Afghanistan like?”