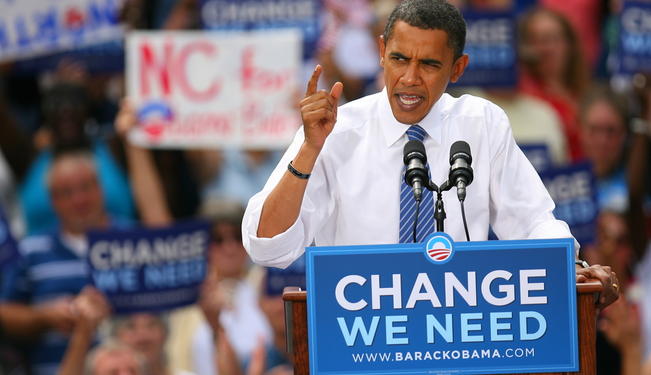 Despite his promise of change, Obama´s approach to US-Israeli relations and the Israeli-Palestinian conflict is influenced by a persisting American Orientalism, which has its roots in the rhetoric of the first settlers. This is the first of two parts.

Before US President Barack Obama faces a tough election night, it is crucial to examine whether he has brought the “change we can believe in” to Americans and — to be scrutinized here — the Middle East and the Israeli-Palestinian conflict. Beyond a factual check, it is necessary to explain the implemented policies in their historical context.

One of Obama´s promises as a candidate, president-elect, and president was a new approach to foreign policy. This was to include “direct diplomacy without preconditions with all nations, friend and foe” and a renewed focus on the Israeli-Palestinian conflict. Early in his term, the president made a promising start by seemingly putting an end to the Bush Administration's “War on Terror” rhetoric with its Manichean world view. An important event in this approach to foreign policy was Obama´s outreach to the Muslim world in a speech he gave in Cairo in June 2009.

In the Cairo speech the newly elected president stressed Islam´s achievements, the idea of a partnership with the Muslim world, and warned of a dangerous “pretence of liberalism.” Obama also made an unprecedented acknowledgement of Palestinian suffering, tracing it back to the creation of the state of Israel in 1948. Jonathan Freedland even saw Obama coming closer to acknowledging the nakba (catastrophe) — the term Palestinians use to refer to Israel´s creation — more than any previous US president.

Moreover, Obama also used the controversial term “occupation” and spoke of a “legitimate Palestinian aspiration for dignity, opportunity, and a state of their own.” Also crucial was his additional acknowledgement that the Islamist group Hamas, which governs the Gaza Strip, has significant support among Palestinians. Some actors in the Arab world, including the Palestinian Authority's Mahmoud Abbas, the Iraqi government and former Secretary-General of the Arab League Amr Moussa, saw the speech as a clear step forward.

Discourse and Policies Towards Israel

Apart from rhetorical nuances, there has been very little change in discourse and practice with US foreign policy towards the Israeli-Palestinian conflict. Clearly, Obama has continued the preferential treatment of Israel.

Notably, the US president began the section on the Israel-Palestine conflict in the Cairo speech, by highlighting Israel´s special status. He described the US-Israel bond as “unbreakable” and as being based upon “cultural and historical ties.” Furthermore, in his address to the American Israel Public Affairs Committee in 2012, Obama stated that it is both countries´ common ideals “that provide the true foundation of our relationship.”

The White House´s official foreign policy is to maintain “the unshakeable US commitment to Israel´s security.” This is not to suggest that the Obama Administration agrees with all of Israel´s policies and plans. A potential military strike against Iran´s nuclear program and the extension of settlements in the West Bank — occupied territory under international law — were and remain significant sources of contention. A New York Times report, for example, stated in September 2012 that Obama did not agree with Israeli Prime Minister Binyamin Netanyahu on a specific threshold for military actions against Iran.

At the start of his term, Obama also tried to revive the Israel-Palestine peace process by engaging both sides in direct talks. Negotiations broke down in March 2010 due to a row over a settlement construction freeze. In spite of the importance of the issue to the Palestinians, in December 2010, the Obama Administration ended a two-year policy to persuade Israel to prolong its temporary construction freeze.

Despite the failure of Obama's personal appeal to the Israeli government, one can hardly argue that US-Israeli relations were severely damaged afterwards. A recent example of the continuously close relationship is the largest joint-military exercise that the two countries ever held, which began recently.

These are only some examples which are part of the larger trend that double-standards are at play when it comes to the Israeli-Palestinian conflict.

The Islamist group Hamas, which has an armed wing and rules the Gaza Strip, can be used to evaluate Obama´s promises to change the discourse and to engage in “direct diplomacy without preconditions with all nations, friend and foe”. This is due to the fact that the Palestinian faction opposes Israel, while former US President George W. Bush, identified the movement in his “Axis of evil” speech as part of a “terrorist underworld.” Moreover, Netanyahu has called the Islamist group on several occasions the “Palestinian version of al-Qaeda”. The United States, the EU and Israel, amongst others, classify Hamas as a terrorist organization; while for example Russia, Turkey and Switzerland do not formally recognize it as such. Indeed, the most controversial aspects of Hamas are its suicide bombings and rockets targeting Israel, and its often cited charter which calls for the destruction of the Jewish state.

In order to examine Obama´s rhetoric and practices towards the Islamist group, it is important to name some of the overtures the Hamas leadership have made in recent years. In 2006, the infamous call for the destruction of Israel was dropped from the movement's parliamentary election manifesto. After the election victory, Khaled Meshaal, the leader of Hamas'political bureau, “spoke of the need to 'realistically' work with Israel and of long-term truce.” In a 2010 interview with Charlie Rose, Meshaal stressed his movement´s willingness to reach a negotiated settlement, short of calling for Israel´s destruction, and to engage in dialogue. He also called the violent resistance against Israel a reactionary measure to the occupation and unrelated to Israel´s character as a Jewish state. In the same interview, he reached out to the United States to participate in a dialogue with Hamas without preconditions, which would make the Islamist movement an equal partner.

These positions can be seen as relatively pragmatic, considering the Israeli-Palestinian conflict´s history of violence and failed attempts at peace. It has to be acknowledged that Hamas is not a monolithic movement, but Meshaal´s superior position gives him the authority to consider his statements representative enough.

Obama's reaction to this outreach by Hamas was highly reserved. An obvious fact in this regard is that the movement has not been lifted from the US State Department's list of Foreign Terrorist Organizations. Moreover, Obama kept up the rhetoric of reducing Hamas to a mere terrorist organization, neglecting its success in the 2006 elections, which were deemed largely free and fair by international observers. At the 2011 AIPAC conference, he labeled an agreement between Fatah and Hamas as being detrimental to the peace process. In that same speech, the US president supported Israel´s policy of not engaging in dialogue with Hamas by stating that “no country can be expected to negotiate with a terrorist organization sworn to its destruction.” At the same event in 2012, Obama only specifically referenced Hamas in terms of its rejection of Israel´s right of existence. As Middle East scholar Corinna Mullin argues, Obama neglected to mention the increasing similarities between Hamas´ position on the peace process and that of the secular Fatah movement.

Obama does not appear to integrate any of Hamas' outreach efforts, and offers to engage in dialogue with Israel into US policies and rhetoric. The continued use of the essentializing “terrorist” label, neglecting the other facets of the group, automatically paints Hamas´ non-violent actions and demands in a negative light.

Significantly, the current US administration's rhetoric and practices are part of a long-lasting American tradition of a specific outlook on the Middle East.

Read the final part of "Persisting Orientalism in the Obama Administration" on November 5, 2012.