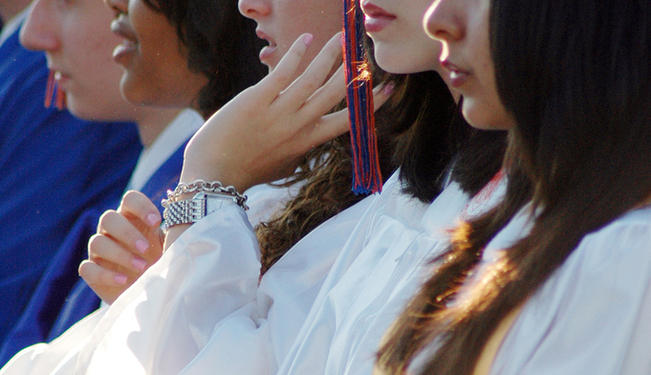 Millenials, the current students and recent graduates of American higher education, are facing a brutal job market with dwindling prospects for the future. Due to the cycle of debt and unemployment, the middle class, once dominated by the college graduate, is facing extinction.

Last September, hundreds of protestors streamed into New York City’s Zuccotti Park with no intention of leaving. Their movement, “Occupy Wall Street,” quickly spawned similar demonstrations across the country. Vague in their motivations and splintered in their political beliefs, these early protestors nonetheless held much in common. Most were young and struggling to find work; nearly all were well educated. As their protest went viral, it offered a first glimpse into the bleak, increasingly angry outlook of the young Millennial generation.

And Millennials have plenty of reasons to be angry. America’s most privileged and educated generation has come of age in the most inhospitable economic environment since the Great Depression. An unprecedented glut of college graduates (roughly 3.4 million in 2012 alone) find themselves competing for a rapidly diminishing pool of jobs. The longstanding American truism – that a college degree opens the door to prosperity and upward mobility – seems destined to go the way of print media and the landline. Little wonder that in a May 2011 Gallup poll, just 44 percent of Americans reported confidence that today’s youth would enjoy a better future than their parents. It was the lowest figure in the poll’s 30-year history.

Today’s graduates are haunted by severe unemployment that dwarfs the national average. Currenty, 9.4% of degree-holders under the age of 25 are jobless. Indeed, thanks to the continuing rise in the number of college-going Americans, the majority of today’s unemployed have some form of post-secondary education. Yet these numbers tell only half the story.  Just as America’s educated youth face unprecedented barriers in finding employment, they are also less certain of maintaining a grip on those jobs they find. Young workers are typically less entrenched and less experienced than their older counterparts. Their positions are more expendable, and when companies trim their rosters – as many continue to do in the wake of 2008’s Great Recession – they are often the first to go.

Even as many educated Millennials struggle to find work, many more have settled for underemployment, filling positions well beneath their skill set and (pre-crash) wage competitiveness. Less than half of 2011’s college and university graduates have jobs that require a 4-year degree. Moreover, the government projects that by 2020, only three out of 30 occupations with the highest number of openings will require a bachelor’s degree or higher. The result will be a growing stampede of graduates into part-time service positions without the possibility of promotion or advancement. This, in turn, will strangle Millennials’ chances of landing more skilled work as it becomes available.

This is the plight of young graduates across a wide array of concentrations. It might not sound too surprising that, in a study of 2010 census data, the Washington Post found that degrees in “Visual and Performing Arts” resulted in an unemployment rate of 9.2%.  It should be more surprising, however, that degrees in “Computer Administration Management and Security” and “Engineering and Industrial Management” carried roughly the same. Beyond the hard sciences, degrees in most fields of study have lost their edge. It is not just Creative Writing majors who have been forced down the path of receptionist or barista.

For many Millennials, therefore, college graduation has been marked by a return to the nest. “Boomerang kid” is a term that has increasingly entered American parlance; according to a May 2012 Pew Research Center report, 42% of young college graduates live with their parents. Many must balance meager paychecks against interest payments on staggering student debt, leaving no room for other expenses like rent (Class of 2010’s public school graduates owed an average of $12,300 dollars, while private school graduates owed an additional $5,000). The result is a staggered and belabored transition into self-sufficient adulthood.

Even once steady, full-time employment is found, problems are likely to persist. Those young jobseekers who succeed in today’s recession economy are still likely to make 10-15% less over the course of a decade than they might have if they entered the market in healthier times. Moreover, Millennials will pay dearly for any period of prolonged unemployment. After the economy has stabilized, newly hiring employers will prefer fresh graduates to those with long, uncomfortable gaps on their resumes. Today’s unlucky graduates may well be left behind. Asia’s 1990 recession created a “lost decade” for young workers in Japan; today’s Eurozone crisis has sown a similar “lost generation” in Italy, Greece, Spain, and Portugal. American youth are in danger of joining these same ranks.

The challenges facing Millennials are further compounded by sweeping transformations in the supply and demand of labor.  While these changes have been caused by accelerating globalization, not the Great Recession, their net impact will be similarly detrimental for young, educated American jobseekers. The last decade has seen drastically increased interconnectivity and the rise of large, thriving, educated middle classes in countries like India and China.  Where these nations once vied for American manufacturing jobs, they are now beginning to vie for middle-income, white-collar jobs – historically the domain of America’s college graduates. As the market becomes more crowded, competition will become more heated. Jobs themselves will grow more temporary and overall turnover will rise.  The notion of a lifelong, salaried position at a single company will virtually cease to exist.

As middle-class work continues to disappear, Millennials will be shunted toward those jobs that remain. Although high-skill, high-paying positions will continue to thrive, the vast majority of graduates will be locked out of competing for them. Instead, they will be directed toward the “nontradable” sector – work that cannot be exported. Nontradable jobs continue to see growth in healthcare related fields as well as private enterprises like food service and retail. Even here, however, the future is far from bright.  Many of the highest-paying nontradable jobs, found in government, have suffered deep cuts thanks to deflating state budgets and ballooning pension costs. Nearly 600,000 government positions have been slashed in the last three years. Consequently, many young graduates seeking to apply their degrees may simply be out of luck.

Grim as young graduates’ prospects seem, the alternative – skipping advanced education altogether – remains far worse. Only 16% of those who graduated high school without pursuing higher education in 2009-2011 currently hold full time employment. An additional 22% have part-time work. Graduates’ first job after high school pays a median wage of $7.50 an hour, just 25 cents above the federal minimum wage. In total, nearly half of all high school graduates are actively searching for a full-time job. Only 30% believe that they can have a successful career without a college degree, yet many believe that their chance of attending college has been priced firmly out of reach. As more college graduates crowd into lower-skilled jobs, this number will not improve. If hope for a steady career remains distant for many educated Millennials, it is almost absent for those whose education ended with a high school diploma.

Some steps can be taken to combat the joblessness crisis. Government should shift emphasis toward restoring American competitiveness in high-skill exports. The deep cuts made to government payrolls in midst of economic downturn should be halted. Meanwhile, individual jobseekers must shift their focus toward what work is available. Despite high unemployment, a May 2012 survey found that nearly 5% of American employers had trouble filling positions, most in hard sciences and skilled vocational trades. For most college graduates, additional education beyond a bachelor’s degree – unless laser focused or paid for by an employer – will likely do little to help.  Advanced degree-holders like lawyers and academics each have their own unemployment problems. Often, the problems are even worse.

Sadly, however, the biggest woes facing young graduates remain all but intractable. Even as the adjusted cost of a college degree has climbed 130% in the last 20 years, its usefulness has plummeted. Indebted, overeducated, and underpaid, America’s youth have inherited a world that no longer plays by the same rules. It will fall to these Millennials to make the best of their bad situation and forge their own brand of success. If they fail, pity the generation who come after them.