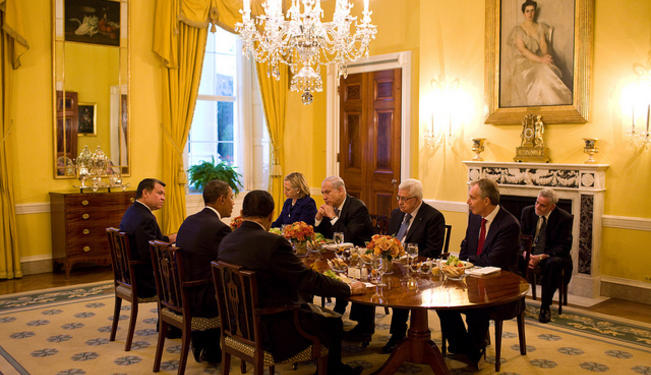 Should Obama win re-election, the United States is likely to embark upon a new serious strategy to achieve peace in the Middle East. Rajai Masri illustrates a possible scenario to the Palestinian-Israeli conflict.

Despite all appearances to the contrary, should Barack Obama get re-elected for a second term as president, the United States in tandem with Europe, is likely to embark upon a new serious initiative to impose a "a peaceful solution" to the Palestinian-Israeli conflict.For some time, the European Union (EU) has appeared to have developed a consensus and a clear vision, or rather a blueprint to solve the so-called Middle East crisis. Indeed, the EU has long waited for the Americans to finally join in. The successful re-election of President Obama and Vice-President, Joe Biden, could set the EU's plan in motion.

There are three crucial factors that could embolden both the US and EU´s resolve to seriously seek a permanent solution to the Palestinian problem. Nevertheless, this will surely never meet the full demands of the Palestinians and Arabs.

Firstly, should President Obama get re-elected, he would most likely have a freer hand to act more boldly, even defiantly to impose his administration´s will over the intransigence of the Likud party (albeit elections are set for January 2013) and the American Israel Public Affairs Committee (AIPAC), the pro-Israel lobbyists in US.

In contrast to Obama, President Bill Clinton in his second term remained hostage to implement bold Middle East policies by virtue of moral obligations that he owed his young Vice-President, Al Gore. The former vice-president aspired to fill his boss’ place and Clinton never wanted to risk Al Gore’s chances of winning the next presidential election. Obama will not face a similar situation, however, as Biden is unlikely to run for president in the future.

Secondly, vital US and Western interests in the Middle East are at cross-roads with the right-wing Israeli policies, which threaten foreign interests and world peace. The US and the EU's strong reluctance to consider military options with the Iranian nuclear crisis, despite the Israeli Likud-led coalition’s persistent warmongering, is a case in point. After the disastrous era of the neo-conservatives dictating US foreign policy, the Americans under Obama are highly reluctant to get militarily involved in foreign wars, especially in the Middle East.

Thirdly, conditions are quite ripe for the West to engage in truly meaningful and constructive dialogue with the new emerging democracies in the Middle East on a more stable and durable basis. The West have vested interests in the region, and for the first time since the collapse of the Ottoman Empire, they have the opportunity to start dealing with truly viable counterparts in Middle East policy. This would be true of a number of countries: populous and strategically important Egypt; Libya freed from the unpredictable adventurisms of a repressive dictator; Tunisia under a new interim government; and Yemen, a once growing hotbed of extremists and Al-Qaeda operatives.

Finally, Syria whose internal strength and ability to counter Western influence in the region, has seriously waned as a result of the current armed conflict. In all likelihood, the Bashar al-Assad regime appears well on its way out, come what may. With the pro-Iran and pro-Hezbollah Syrian regime gone, the long nurtured defiant and rejectionist "Resistance-Axis" could fall. This is especially the case since the economic sanctions on Iran seem to have had an impact and affected Tehran's internal situation.

The countries which have been largely affected by the Arab Uprisings, are faced with very serious socio-economic and development challenges. Indeed, this requires a significant influx of investment capital and the transfer of technology and know-how. This fact will render the new emerging Middle Eastern democracies susceptible to Western influence and force them to attain Western goodwill in order to qualify for the needed inflow of investment capital, and more favorable terms for trade and economic exchange. Besides, the new emerging Arab democracies neither have the forebearance nor possess the necessary means to spend money on wasteful and inconclusive military ventures in view of a most unfavorable balance of power.

Thus, should Obama win re-election, the stage would be set for the US and the EU to work in tandem to force the Israelis to task and impose a Western-led peace plan for the Palestinian-Israeli conflict. This could happen at a fast pace, and with a little courage could even possibly involve warning Israel of economic and military sanctions, and embargoes to ultimately force Tel Aviv to heed the call. The so-called Israeli "doves" appear to hold a blueprint of their own self-serving vision of a peace plan, that is to a certain extent based on the UN Resolution 242 which would with some adjustments meet the US and EU version to start with. The plan for a peaceful settlement, in the eyes of the Israeli doves, could converge with the Western version that could more readily be put on a fast track for implementation. This could become a possibility, despite the serious changes to the landscape of the Occupied Palestinian Territories that over four decades of Israeli occupation and settlement have caused.

One likely scenario of any peace settlement is that the Occupied West Bank will be re-integrated into the Hashemite Kingdom of Jordan and the Golan Heights will be returned to Syria. There are three options regarding the Gaza Strip: it would either be joined to the West Bank, given a special status, or a more developed version to what existed prior to 1967 under Egyptian rule would be implemented. When the Assad regime falls and the subsequent breakdown of an important link in the Resistance-Axis occurs, Hezbollah is likely to become a greater non-armed political force, with its militias integrating into the Lebanese army.

In short, despite the political rhetoric, the truth is that the Western world has reached the final conclusions that Israel is becoming a very serious liability and is risking Western interests in the vital Middle East. With a fragile world economy and hemorrhaging financial resources, the West is not in the mood to embark on any new military ventures that Israel's policies are dragging them into.

The scenario above may seem unrealistic, but it is not too far from Western policy makers’ thinking and possible planning schemes. Although it might seem farfetched and un-implementable when considering US domestic pressures, first and foremost the influence of AIPAC.