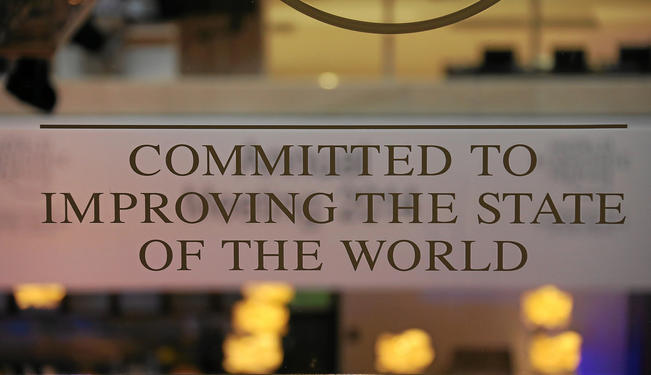 As we enter 2014, the world continues to be as kaleidoscopic a swirl of activity as ever. At a time of emails, tweets and cell phones, there is a real risk of drowning in the noise. Our goal is to cut through the clutter and give you the information that matters. In other words, we want to help you make sense of the world.

Please keep an eye out for our best articles of 2013 and tell us how we can do better. We wish you all the best for the new year.

In the US, the National Security Agency (NSA) saga rolls on. A week after a judge damned NSA surveillance in a 68-page judgment, another has found it legal. New York District Judge William Pauley described NSA surveillance as a "counter-punch" to al-Qaeda. He believes that the Fourth Amendment, which was discussed in the previous weekly report, is "fundamental, but not absolute."

The debate over NSA activities was long overdue and will now be carried out not only by the press, the public and the Congress but also by the judiciary. Ultimately, the case will go to the Supreme Court. In the meantime, NSA surveillance might be rolled back on the recommendations of a presidential panel which has already stated that fundamental values such as the protection of privacy and civil liberties "have been eroded by excessive intelligence collection."

Cuba continues to gradually open its economy. The government has eased restrictions on loans to private borrowers. Individuals and small businesses can now borrow smaller amounts. The minimum lending amount has been reduced from 3,000 pesos to 1,000 pesos. Borrowers will have longer to repay their loans and will be able to use their houses and jewelry as security. Last week, Cuba lifted restrictions on citizens buying foreign-made cars.

In Mexico, five decapitated bodies were found in the western Michoacan state as drug cartels continue their turf wars that have inflicted incalculable damage to the country. Despite the federal government sending thousands of troops to the state, violence has continued. Mass graves were recently found and three local police officers were killed last week. The War on Drugs is simply not working anywhere and Mexico is no exception.

The Russian city of Volgograd has been hit by terrorist attacks at a train station and on a trolleybus. Over 30 people have died so far in both the attacks. Russia is gearing up for the 2014 Winter Olympics that will be held in Sochi. The city is close to the Caucasus region where resentment against Moscow has led to insurgency in Chechnya and Dagestan. The country has suffered terrorist attacks in the past but has largely managed to control both insurgency and terrorism.

In Ukraine, protests persist and tens of thousands have marched to the private Mezhygirya residence of President Viktor Yanukovych demanding his resignation. Protests have been continuing for more than a month. They seemed to be losing momentum, especially after Russian President Vladimir Putin promised Ukraine $15 billion and a sweet gas deal. However, Tetyana Chornovol, a prominent journalist, was attacked on Christmas provoking outrage. She had accused Yanukovych of corruption over the financing of his Mezhygirya residence.

In France, the ridiculous rate of 75% taxation for high earners has been approved by its highest court. The initial proposal to tax individuals was deemed unconstitutional. Therefore, President Francois Hollande’s government came up with a measure to make employers liable for the tax on all salaries that exceed €1 million.

After banning the Muslim Brotherhood, Egypt’s government has now declared the Brotherhood to be a terrorist organization. It has launched a crackdown and arrested thousands of protesters. Protests, violence and repression are increasing in Egypt. A violent crackdown on universities, especially, the famous al-Azhar of Cairo, has led to deaths. The press is being persecuted too. In the latest incident, four Al Jazeera journalists have been arrested in Cairo.

Turkish Prime Minister Recep Tayyip Erdogan is embroiled in a major corruption scandal involving juicy real estate deals. Three ministers have resigned but Erdogan has vowed to fight on. One of the departing ministers has called for Erdogan to quit as well.

In neighboring Syria, the government has been bombing the rebel-held parts of Aleppo killing more than 300 people, including 87 children. It has used barrel bombs – crude devices filled with explosives and fuel – that kill indiscriminately. Syria’s civil war has spilled into Lebanon. Mohamad Chatah, a former finance minister and prominent Sunni leader who was a prominent critic of Syria and Hezbollah, was killed along with 11 others. Any new civil war in Lebanon will be between Shi'as and Sunnis and mirror the brutal conflict in Syria.

Military forces loyal to South Sudan’s president, Salva Kiir of the Dinka tribe, have driven away a militia of largely Nuer youths that was advancing to the town of Bor. Barely two years after independence from Sudan, the specter of civil war is haunting South Sudan as 1,000 people have already died and over 100,000 have fled their homes. Conflict broke out after Kiir accused Riek Machar, his Nuer former vice president, of plotting a coup. Machar’s rebellion has spread, reaching the oil-producing Unity and Upper Nile states. Oil production has fallen by at least 45,000 barrels per day to 200,000 barrels daily. Because South Sudan has oil, more powerful nations have an interest to intervene.

In Central African Republic (CAR), a full-scale civil war is on. Two more peacekeepers were killed and citizens from Chad are being targeted because many rebel Seleka gunmen hail from that country. The battle has fused a tribal conflict with religious fervor thanks, in no small measure, to the work of missionaries.

In Niger, more than 20,000 people have marched to protest against President Mahamadou Issoufou's rule. Demonstrators are demanding an end to corruption and media censorship as well as an improvement in living standards.

Russia is extending its arc of influence in Central Asia. After Belarus and Uzbekistan met to discuss deeper economic cooperation, Uzbekistan joined the free trade zone of the Commonwealth of Independent States (CIS), which is a loose association of former Soviet republics.

In Afghanistan, campaigning for elections has begun. Qayum Karzai, President Hamid Karzai’s brother, is trailing in opinion polls to Abdullah Abdullah and Ashraf Ghani Ahmedzai. The latter is leading in the polls because of support from Uzbek leader Rashid Dostum.

In Pakistan, charismatic cricketer-turned-politician Imran Khan continues to keep the pressure on Prime Minister Nawaz Sharif over US drone strikes. Sharif had claimed that protests by Khan’s party were isolating Pakistan. In a fiery response, Khan accused Sharif of emulating the Pakistan People’s Party (PPP) and engaging in duplicity by covertly supporting US drone strikes. Most Pakistanis find drone strikes humiliating and support Khan on the issue.

Japanese Prime Minister Shinzo Abe visited the Yasukuni shrine that honors many war criminals, infuriating not only China but also South Korea. Most of Asia found the visit deeply distasteful because the Japanese committed numerous war crimes such as killing civilians, torture and mass rape. The US was disappointed by this visit, which it felt would "exacerbate tensions" with neighbors.

In China, more than 500 municipal lawmakers in Hunan province have resigned following an election fraud scandal. Li Chongxi, a senior leader from Sichuan province and an aide to disgraced ex-Security Chief Zhou Yongkang, is being investigated as well.

Government frugality is unlikely to be matched by Chinese parents. The number of students going abroad has tripled in a decade. A degree from a top US school like Harvard or MIT is worth its weight in gold and often more prestigious than business success. China may be an economic superpower but it still suffers from an inferiority complex.