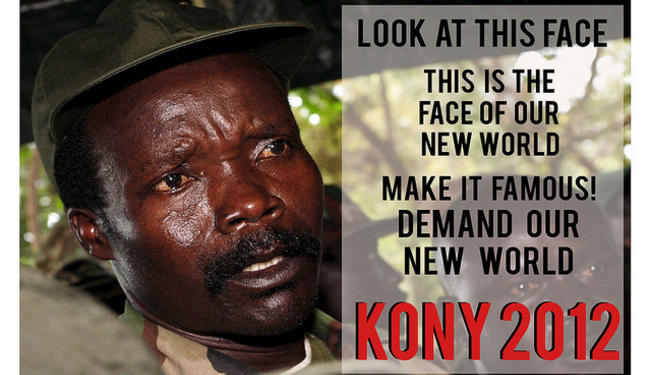 Just over a month ago, a ground-breaking campaign to catch the world’s most-wanted war criminal sparked furious debate across the planet. The San Diego-based charity Invisible Children told the world that Joseph Kony, founder and leader of the Lord’s Resistance Army (LRA), must be brought to justice. Atrocities include the abduction, rape, mutilation and murder of men, women and children across central Africa, which have been carried out by his ranks since the 1980s. As the campaign video fervently depicts, Kony stands accused of kidnapping tens of thousands of children, whom he recruits as child soldiers or sells as sex slaves. He has brutalised communities – beginning with those in northern Uganda – in a chain of attacks that has lasted more than 20 years.

The Kony 2012 campaign video launched on YouTube on March 5th and spread like wildfire. Within hours of its release, Invisible Children’s slickly-produced footage achieved phenomenal global publicity. People around the world heralded the charity’s attempt to “make Kony famous” in order to pressurise world governments, and to catch the International Criminal Court’s (ICC) most-wanted. Social networking sites such as Facebook and Twitter were bursting at the seams with Kony-related status updates and posts – bolstered by backing from such celebrity favourites as Oprah Winfrey and Zooey Deschanel.  Thus began the saga of the most viral video of all time.

Alas, then came the backlash. Bloggers, commentators and, most significantly, Ugandan citizens, spoke out against Invisible Children for a host of reasons. They have been accused of oversimplifying a nuanced, complex issue; perpetuating the “white man’s burden” attitude towards third world conflict resolution; and distributing only one-third of donations to fund efforts on the ground. The charity has defended its position regarding the latter by emphasising that it is an advocacy and awareness group, and makes all its finances public. The video did not mention that since Kony was pushed out of Uganda in 2006 he has been coordinating a much smaller army of 200-300 LRA soldiers, scattered across the Central African Republic, South Sudan, and the Democratic Republic of the Congo.

Amid the furore, Jason Russell, co-founder of the charity and director of the campaign video, was detained and hospitalised after roaming the streets in his underpants, performing lewd gestures and screaming inconsolably one sunny San Diego morning. Colleagues Ben Keesey, CEO, and Jedidiah Jenkins, Director of Ideas Development, rallied in a show of strength.  They boosted morale in a new video promising viewers that Kony 2012 is “off and running”, with 3.5mn signatures to its online pledge supporting Kony’s capture.

Drama aside, Kony 2012 raises many interesting questions about the future of activism. Sceptics have discredited the campaign as an example of “slacktivism” or “clicktivism”, whereby people savour that feel-good charitable sensation with minimal effort, by signing an online petition, or changing a Facebook status in honour of a certain cause. CEO of Astonish Media Group John Conway categorises such acts as the first tier of “slacktivism”, which is as far as most people go in taking action in support of a cause. Conway depicts a three-tiered “slacktivist” hierarchy, in which the second tier consists of giving money to the cause, whilst the third features activists who visit the problem site to take physical action – often a small number. He notes that although “slacktivism” must not be ignored, particularly given that the OWS movement and the Arab uprisings are “slacktivist” in origin, capturing Joseph Kony is, sadly, one of the more complex causes that will not be solved in this manner.

The crux of the issue is the value of “awareness” in a world where more than two billion people are using the internet and responding critically to everything they find on it. Awareness has been instrumental in so far preventing the “Stop Online Piracy Act” (SOPA) and the “Protect IP Act” (PIPA) from being passed in US Congress and Senate. On January 18th, a one-day online “blackout” involving such influential sites as Wikipedia and Reddit was conducted in protest against the proposed legislation to clamp down on illegal file-sharing, particularly from foreign websites that flout US copyright laws.

More recently, an online awareness campaign has been critical in bolstering the effort to prosecute the killer of Trayvon Martin. On March 8th, a petition was posted on digital campaigning site change.org to pressurise Sanford police in Florida to arrest George Zimmerman for shooting 17-year-old Trayvon, who was returning home from a local shop, reportedly unarmed. The petition has gathered more than two million signatures, and has triggered waves of street protests across America, as well as recognition from President Barack Obama.

Furthermore, the grassroots digital campaigning seen throughout the Arab Spring has been celebrated the world over for providing previously silenced voices with a global mouthpiece. Armed with this, repressed peoples can coordinate and enact change.

Yet Kony 2012 is not grassroots activism, and the majority of spectators of the video have not ventured beyond the first tier of simply spreading the video further across the internet. As Evgeny Morozoz, author of The Net Delusion: The Darker Side of Internet Freedom notes, “The real issue here is whether the mere availability of the ‘slacktivist’ option is likely to push those who in the past might have confronted the regime in person with demonstrations, leaflets, and labor organizing to embrace the Facebook option and join a gazillion online issue groups instead. If this is the case, then the much-touted tools of digital liberation are only driving us further away from the goal of democratization and building global civil society”.

“Slacktivism” aside, Invisible Children has been the target of many complaints for appearing to hog the microphone to propagate its own version of the Joseph Kony story. Ugandan blogger and journalist Rosebell Kagumire said the charity had no right to convey that Ugandans were too helpless to speak for themselves and to present its own African narrative to the world. Her comments were reinforced by Ugandan Prime Minister Amama Mbabazi’s video response to the campaign. In this he invites celebrities and global citizens alike to visit his country and see for themselves that it is not the war-torn, hopeless state portrayed by Invisible Children, and emphasises that Uganda continues to search for Kony.

To its credit, Invisible Children has created a comprehensive LRA crisis tracker and early warning system through which communities in LRA-held areas can alert one another when an attack or abduction occurs. Additionally, following the video’s release, the African Union (AU) announced it would deploy a 5,000 strong force to catch Kony, which illustrates the huge impact the viral campaign has had on regional efforts to capture the warlord. In October, Obama had already confirmed a smaller force of 100 US troops would be sent to the region following persistent lobbying by Invisible Children. However, Ugandan cabinet minister Ayalla Bigombe is among many Ugandans to point out that efforts to not only catch but negotiate with Kony were in place throughout the 1990s. During this time Kony’s attacks were most severe and his army was at its most robust in contrast to its relative decline today.

The Internet seems to have created an illusion of endless possibility; if one’s efforts can reach a global audience, then anything is possible, and everyone can work together to change the world. Yet, as Kony 2012 indicates, this only really works when one’s audience is personally connected to and directly affected by the movement in question; in other words, when it is by the people, for the people. For instance, whether actively supporting it or not, Americans have largely accepted the validity of the OWS movement. Likewise, people around the world have offered a nod of approval to citizens of the Arab world joining a campaign rooted in social media for freedom and democratic values. A humanitarian campaign based thousands of miles away carrying an unsavoury hint of neo-colonial sentiment, however, faces a far greater struggle to gain support from the global online community.

Kony 2012 has both helped and hindered Invisible Children. Whilst it has indeed made Kony famous, it has also exposed the charity to such bitter criticism and cynicism that the actual efforts being made, risk being overlooked, or even undermined, by its seemingly naïve online strategy. It can be seen as  a wake-up call for digital campaigning after the successes of OWS and the Arab Spring, demonstrating that visionary rhetoric will not satisfy a sceptical online public when complex third world conflicts are brought into play. Nevertheless, as the Global Poverty Project observes, “it may be that the revolution will not ‘take place’ online, but…it is increasingly likely that it will start online.” It is what happens after this initial publicity that really counts.