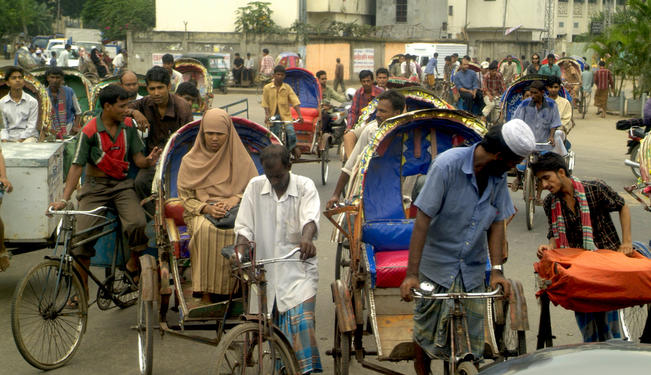 India and the US have yet to develop a synergy in their policies towards Bangladesh.

As a dangerous storm brews in Bangladesh in the run up to the polls on January 5, India and the United States stand far apart on how best to deal with the protracted political crisis.

A spate of violence unleashed as a result of the opposition Bangladesh Nationalist Party’s (BNP) call for constant strikes has already claimed several lives. The international community is deeply concerned as evidenced by a series of high-level visitors to Dhaka, including Indian Foreign Secretary Sujatha Singh, all of whom have advised the main players to compromise. But the forecast appears dim. Singh was recently in Washington to discuss the regional situation among other issues.

The BNP, led by Khaleda Zia and its affiliates, which include the Jamaat-e-Islami and other radical groups, have blockaded roads, shut down railways and ports and disrupted ordinary life to force the resignation of Prime Minister Sheikh Hasina.

Zia’s premise that elections would be rigged by Hasina sounds more like a political ploy. Several local elections have been held under Hasina’s government, many of which her party has lost. Increasingly, it appears that Zia is losing popularity because of the protests and violence. It is also clear that the BNP is more and more dependent on the Jamaat-e-Islami for muscle and manpower.

The dangerous impasse is at the heart of the crisis.

India and the US have widely divergent views on not only the nature of the crisis but also on possible solutions. A fair amount of rancour has accumulated in India against what it sees as American naiveté at best and mischief at worst.

New Delhi views Hasina’s Awami League as the last plank against the onslaught of Islamist forces, which have grown in both size and muscle over the past decade. As an immediate neighbour, India doesn’t want another Pakistan in the making on its eastern border. It is vital for India that the tide of radicalism be stemmed.

Hasina’s party has taken a tentative stand and tried to project the country’s secular Bengali identity against the Islamic identity embraced by Jamaat-e-Islami, Hefazat-e-Islam, and other Islamist groups. She has also cooperated with New Delhi and is handing over militants wanted in India.

Washington views the current Bangladeshi situation through an entirely different lens. It says that an election without the BNP would be considered illegitimate by the people and inevitably lead to more violence. But it is unwilling to say who is behind the violence.

US officials skirt around the role of Jamaat-e-Islami cadres in the brutal assaults – hacking to death of opponents because it is reminiscent of the Islamic sword. The attacks on Hindus, Buddhists and Ahmadiyya are equally shocking.

Washington has also taken a strong exception to Bangladesh’s International Crimes Tribunal, which it says is conducting show trials of "collaborators" accused of helping the Pakistani army during the 1971 war of liberation. Of the 17 accused, 13 belong to Jamaat, which clearly supported Pakistan in the war but today it says the trials amount to political vendetta.

The human rights community has raised questions about whether the process ensures a fair trial. US officials are also critical of the legal standards, which they say undermine the defendants' rights. There is no right to appeal.

But a majority of Bangladeshis support the trials as shown in a number of opinion polls. Many support the death penalty for the collaborators.

The US may have other complaints of a geostrategic nature against Hasina’s government. Washington apparently had offered to develop port facilities in Sonadia Island in the Bay of Bengal but was rebuffed by Dhaka. Instead, China got the job with promises of 99% funding. The first phase is expected to be complete by 2015.

Hasina also has diversified her arms acquisitions, spreading the net to Russia, a move that irks Washington. Another term for her would mean leaning in directions with which the US doesn't feel comfortable.

Bangladesh has clearly become a frontline state in the deeper struggle in Asia for influence and resources. Unfortunately, India and the US, otherwise strategic partners with convergent interests, haven't been able to develop congruent approaches even though they may agree on key objectives.

For India, the stakes are high. The spread of Islamic extremism has a direct bearing on its security. New Delhi has watched Pakistan radicalize as a result of forces unleashed for Cold War objectives with financial and material support from Washington.

Influence from the Gulf

Something similar is happening in Bangladesh. Over the years, funding from Saudi Arabia, Kuwait and the United Arab Emirates has flowed into countless "NGOs" and madrassa chains. Jamaat-e-Islami-affiliated organizations are in the forefront of this Arabization of South Asian Islam. But the US apparently considers Jamaat-e-Islami a "moderate Islamic party."

A study by British journalist Frances Harrison for the Institute of Commonwealth Studies released in June 2013 estimates that nearly 10 million children are enrolled in 19,000 madrassas where they learn nothing about science, arts or literature. Madrassas for girls are veritable prisons, churning out young women who consider obedience to men their prime goal in life.

What is happening in Bangladesh is far more ominous than an election boycotted by a sulking politician. It needs a clear, sharp lens. Washington can and should understand the wider implications of the social forces at play. And India must convince its strategic partner about a common approach.