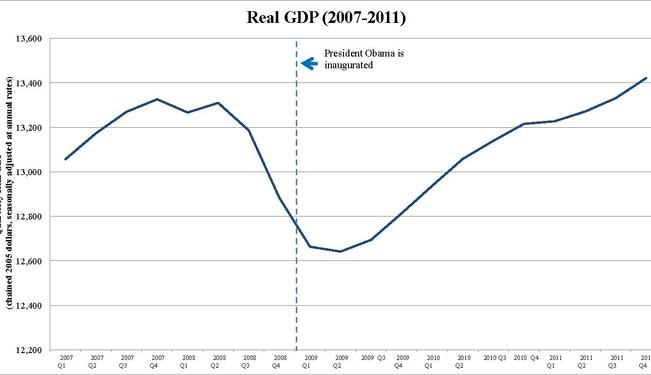 On the 27th of January the Bureau of Economic Analysis released its first estimate for 2011 GDP. It showed national output for the first time surpassing the pre-recession peak, which occurred in the last quarter of 2007. (See chart above) The expansion in 2011 was led by autos, computers, and other manufactured goods.

Given that the economy hit its trough in mid-2009, the long slow climb since then has been disappointing. The outcome turns out to have been worse than the conventional wisdom that sharp declines tend to be followed by sharp recoveries. On the other hand, the outcome turns out to have been somewhat better than the Reinhart-Rogoff thesis that when the cause of a recession is a financial crisis, the recovery tends to take many years.

To be sure, the housing market has yet to recover and households are still painstakingly rebuilding their battered balance sheets. But is this the complete explanation for the disappointing state of the economy — the origins of the crisis in a housing bubble and financial collapse?

The first point to note is that the biggest single reason why the level of GDP over the last three years has been lower than most people forecast in January 2009 has nothing to do with overly optimistic forecasts in January 2009 of the rate of growth looking forward, nor with how good or bad Obama’s policy proposals were, nor with how effective the Republicans turned out to be at blocking them. The BEA subsequently revised the GDP statistics substantially downward, and now reports that the real growth rate of the economy in the last quarter of the Bush Administration, instead of negative 3.8% per annum as reported that January, was in fact negative 8.9% per annum! The trough of the V was far deeper than was realized at the time.

The second point to note is that construction, which usually helps lead the economy out of a recession, remained, indeed had a strong negative influence on GDP throughour 2006-2010. Fortunately, in the latest figures, residential construction finally returned to a (small) positive source of growth in the economy over the last three quarters.

The third point to note is that the government sector has been the one component of demand to exert a substantial negative effect througout the last five quarters. The reason is the withdrawal of fiscal stimulus at the federal level, at a time when state and local governments are also cutting back sharply on spending and employment.

*[This article was originally published by Jeff Frankels Weblog on January 27, 2012].