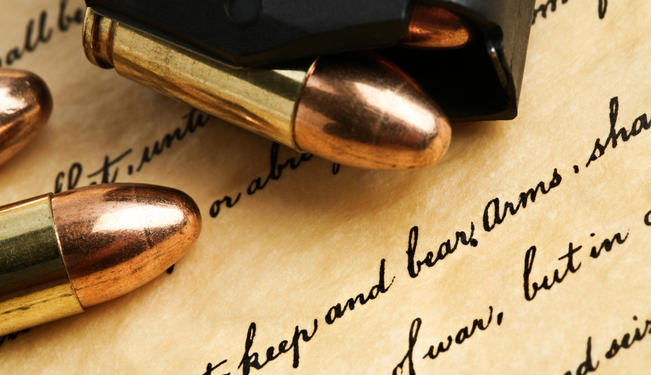 Editor-in-Chief Atul Singh argues that gun control is no panacea; American society itself will have to change for school killings to decrease.

Wayne LaPierre is the executive vice president of the National Rifle Association (NRA), one of the most powerful lobbies in the US. After the Oklahoma City bombing in 1995, he described federal agents as “jack-booted thugs.” This led former President George H. W. Bush to resign his NRA membership. This time LaPierre has surpassed himself. He has called for armed security in every school as a means to make the children of America safe. Even Fox News, hardly a lily livered liberal organization, questioned whether such a measure would be possible or wise. It estimated the cost of stationing a cop in every school to be around $5 billion excluding pension and benefits.

The Right to Bear Arms

Amendment II of the Bill of Rights gives people “the right to keep and bear Arms.” It was intended to keep a check on the potentially autocratic tendencies of the government at a time when the US was a lonely democracy in a world dominated by monarchies. An armed citizenry was seen as “necessary to the security of a free State” and male citizens were supposed to form the backbone of a militia that was to defend the young nation against British redcoats or any other potential invaders. Whilst guaranteeing the right to bear arms, Amendment II called for a “well regulated Militia.” Simply put, the framers of the US Constitution guaranteed the right to own guns in a certain context that took into account both the liberty of the individual and the security of the state.

The opposition to any kind of gun control is premised around three arguments. First, gun control is a violation of a fundamental constitutional right and an encroachment on individual liberty. Even the Federal Assault Weapons Ban of 1994 was unacceptable because who is the government to decide what kind of weapons a citizen can own. Second, control will be ineffective because “guns don’t kill people, people kill people.” Besides, people who wanted to kill others will be able to get guns illegally on the black market. Third, gun control deflects attention from the real malaise that afflicts American society. The reason for the violence in American society is a collapse of faith, individual isolation and glamorization of violence in the media. Weaned on violent video games, young people imagine and implement killings for glamour and attention.

No wait, let us get rid of guns

Opposition to guns is growing. A visibly pained Obama captured the mood of the nation when he declared that the US has “endured too many of these tragedies in the past few years.” They believe that there has to be some form of gun control. People should not be allowed to buy assault weapons at the very least so that the scale of massacres is not the same. In an urban setting with people living in close proximity, there is no longer the need for people to own guns. The constitution needs to change with the times to create a more safe society.

There is more to it than guns

The US certainly needs to tighten its gun control laws.  The Federal Assault Weapons Ban of 1994 that expired in 2004 needs to be reinstated. Just as the US does not allow citizens to own tanks or fighter jets, it cannot allow for assault weapons either. They are combat weapons that pose too much a risk to fellow citizens. Gun licenses for hunting and sporting weapons should only be obtainable only after police and medical review. Tough police action is needed to mop up guns floating around in the US. Stricter laws are needed not only for the safety for American citizens but also for those who live south of the US border. In due course, a constitutional amendment might even be needed but that is a long way off.

Controlling guns is not enough. There is something fundamentally flawed in American society and education. In places like Oakland, Detroit and Washington DC, children in inner city neighborhoods see widespread bullying, drive by shootings and gratuitous violence. They lose their innocence too early. Society has become fragmented and many children spend more time playing video games instead of playing with other children. Even the NRA has a point when it criticizes the gratuitous media culture with its obsession with sensationalism, celebrities and violence. Many of these problems are too big for the government to solve but it could start with controlling guns and improving schools.