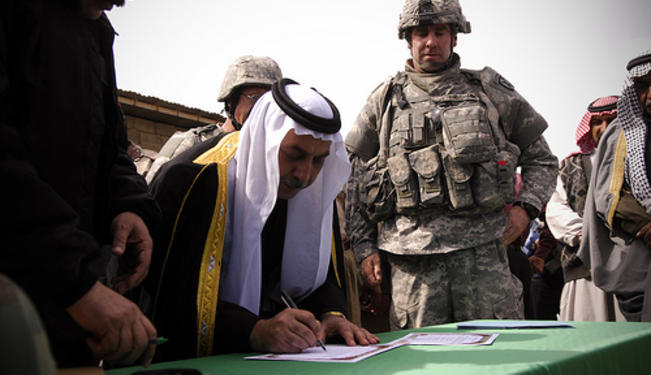 A humanitarian aid worker’s perspective on the changing face of the rest of the world.

It was the summer of 2005 and for the time being a group of us humanitarian workers had found an acceptable security situation in Khanaqin, a town in eastern Diyala a few kilometers from the Iranian border.

"They are imbuing the soil with their blood", I had said. "Sanctifying it and making it them. The field of Black Birds for the Serbs", I had added as I turned toward my Serbian program director, "versus the foot-loose, the homeless, and the multinational who will not die for soil."

We had sat around a broken fountain at dusk in our back yard. We were the foot-loose on reclaimed Kurdish soil, barely 20km from Arab soil to the west, with the displaced, the remnants of the ethnic purges, on either sides of the line.

Empire, nation-state, treaty of Westphalia, the humanitarian imperative, global village, self-determination. Such important concepts we had delved into. School busing, ethnic cleansing, the wall in Palestine, the Schengen Accord, EU accession for Turkey. All attempts, we figured, at defining ‘Right Relations' between peoples. To what extent do we conglomerate or separate? If conglomerate, then is it federated, allied, imperial or national? If separated, then is it by race, ethnicity, language, religion, ideology or geography?

For us, development workers, 'right relations' was our calling, our debate, our quandary. Some of us had argued that there was a certain inevitability to globalization whereby borders disappear; that there is as much possibility of containing this evolution as the wind. They referred to the technological revolution which allows for all peoples to increasingly hear and see what others offer at low cost and to see clearly how others behave. It intrudes at will, my colleague had asserted, and causes vast cultural convulsions in religion, language, economic opportunities, and values. At risk of prison, we agreed, marginalized folk set up receivers in hidden places for transmissions which emanate now from Western liberal democracies. Hollywood, Times Square, Silicon Valley, Wall Street permeate the remotest villages in Africa. "Imagine the 14 year old Eritrean boy", I had said, "in burlap, thin as a stick peering into the images of Baywatch or the Simpsons at a store front in Asmara. Imagine the Shia house-cleaner in Kut watching a re-run of the Matrix on the master's TV. Whatever they defined as right relations before are certainly getting re-defined now in ways they never were before. To the extent they think in terms of Justice—those who receive attribute the differences to accidents of birth. For those who are transmitting, it is ''merit''. For the receivers, they immediately yearn for the abundance before their eyes and then denied, they insist on it…and if denied again, they eventually seek to destroy it."

That is, we nodded, a done deal. The world's residents, we agreed, from now on will always read and see more about each other at very low cost and that will cause a certain amalgamation of culture and a certain redefinition of ‘Right Relations’ with other societies and within their own. As long as this communication revolution continues to be inclusive and open rather than domineering, it might presage a better world, albeit with significant convulsions as 'abundance' is distributed more broadly and the centers of influence disperse.

So borders were now permeable.

But simultaneous and parallel with this we knew better than most, that there had also arisen fierce movements for borders where none existed. And, we, as development workers, were now also bound up in these, which we called ‘complex emergencies'. We knew that this vast infiltration and homogenization was different from those earlier conglomerations, just 50 years earlier, such as colonialism, Sovietism and containment, which were assured by armed force. Some of us older folk had been witnesses as the heavy hand of the colonialist and then the Kremlin was lifted and then the countervailing hand of containment followed suit allowing the submerged aspirations of smothered cultures and tribes to raise their fists for self-determination and insist on new borders. We had been at work as heretofore large inclusive borders dissolved across half the world to be replaced by high walls around ethnically homogeneous entities. A dozen had thus far been formalized into new States or protectorates. But many more wanted independence from the former configurations and continue to insist on asserting their own language, religion, and cultures. In fact, hardly anywhere we look across the old Soviet periphery or in Africa are there not incipient independence movements, armed insurgencies, crying for borders as a guarantee for ‘right relations’.

So, there was the dynamic, our context. The global homogenization through the new technological revolution and the fierce insistence for borders around tribal entities. We are caught in it. We sit on all these ethnic fault lines—in Bosnia and Republic Serbska, in Kurdistan, in the Sunnite triangle, in the Maronite stronghold. In Aceh, in Mindanao, in the Casamance, in Western Sahara. We insist on sitting on the fault lines and working with both sides. We insist on neutrality so as not to aggravate the differences. We hope for accommodation of the warring sides by treaty, not violence. They, in turn, see each ounce of our assistance given to the other side as a political act. Each side sits you down and pulls out their maps and agonizes over patrimony lost. They re-iterate their version of Right Relations between them and their adversary. They keep you up late with the tales of the martyrs, often true, usually presented as proof of one side's historic pre-eminence rather than a reflection of a more insidious cause.

That night, and others, I maintained we were indeed an avant garde of Western Civilization and by our very presence, transmitters of the messages and skills for ''accommodation" with those principal forces driving globalization. We are the persistent invasion by Western values and know-how. We strive to effect this transformation in ways that foster inclusiveness and not domination so that eventually those parts so distant from the source of conglomeration become variable centers as well; basically that all folk, with time, will have access to abundance based on how much they value it, not where they were born.

Even for the veterans like myself in this business, it was still astounding…the collections of mud hooch's in the dessert, with a generator and a satellite dish on top of at least one of them, where the poor folk gather to let the West beam in, even, at times, at risk of prison. And then, we are also there, ubiquitous, on the hundreds of fault lines, risking our lives as we straddle the new rising borders. All of it now, so dramatically unfolding in the Arabian Peninsula. The teenagers are clawing down the heretofore isolation with no less passion than Berliners smashed down their wall. For all of it…Silicon Valley…Times Square…and Hollywood…for chatting with Suzie in Toledo or diving into Portland's digital library.

And then, for us development workers, who have invested millions in enhancing learning opportunities for Iraqi's, who have sought to help them make an accommodation with the globalization before them…we, too, sweat it out, nervous for our lives as Sunnite extremists slaughter Shia in the hope of creating a civil war and Kurds threaten secession from it all. We, who seek Right Relations, are in the middle of some great transformation that is trembling the earth beneath us. We see popular yearnings for universal participation and sharing freed up for the first time in history and we see the horrific resistance by tribes and zealots to any accommodation with historic neighbors.

We sense that our day, doing what we do, may have passed. That the lonely emissary of the West has run its course. That new circumstances have created emerging and unprecedented opportunities to pursue a more just world. Instead of far-flung NGO offices that manage Western taxpayer investments, we now have the opportunity to broker partnerships between emerging civil society overseas and mature civil society in the West. We have the opportunity to bring the disenfranchised overseas into the living rooms and classes of the franchised with great benefit to both. And then, if that acquaintance can be brokered, we can hope to engage resource and knowledge transfer between the two entities. Class to class, chamber to chamber, hospital to hospital, business to business. By doing so, we would gain far more than the simple knowledge and resource transfer. We would engage what really ails us…namely the massive neglect of the West in addressing 'Right Relations' until they wash up on our shores (such as 9/11) or the unmet yearnings of the third world that, with time, will produce a wasteland.

We, development workers, know now that it was never about micro-credit or sustainable agriculture, or preventative health. It was and is about Westerners coming to understand that now, for the first time, they are inexorably joined to the plight of those who suffer overseas. Not only for the ethics of it but for great practical reasons. A country whose economy, culture, demographics, and defense all depend on its external relations, ignores global inequities at its peril.